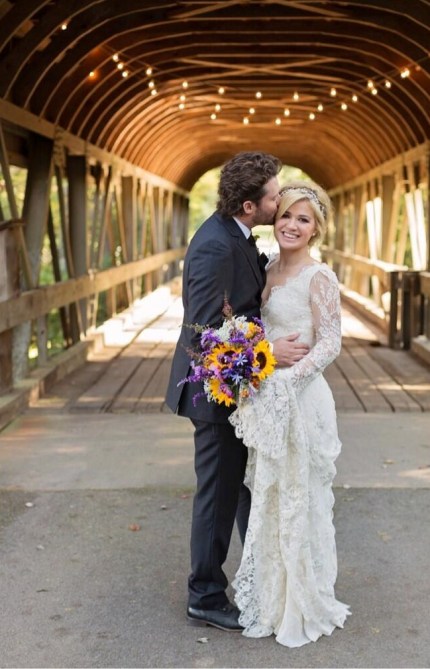 MORE: This Woman’s Fiancé Surprised Her With A Dream Wedding Based On Her Pinterest Board

The Season 1 “American Idol” winner may be known more for her strong pipes than her sartorial acumen, but Clarkson looked stunning from head-to-toe in a Temperley London lace wedding gown, which features an empire waist and long sleeves, giving it a vintage feel. The “People Like Us”  singer also sported a soft updo and a gorgeous headpiece. Clearly, Clarkson was a big fan of the hair piece, tweeting, “thank you to my friend @JimVerraros & Maria Elena 4 the beautiful headpiece!”

The couple got engaged in December 2012 after Blackstock, 36, proposed with a yellow canary diamond ring from Johnathon Arndt. According to Us Weekly, Clarkson is set to film a Christmas special later this month, and is also in the process of getting her pilot’s license. In fact, she flew herself and her fiancé in for the ceremony! Guess this will make getting to their honeymoon easier.

The only guests in attendance were Blackstock’s two children from a previous marriage. Clarkson had mentioned her desire to elope back in August, leading some to speculate she was pregnant. In early October, she told Us Weekly, “It’ll be both a wedding and an elopement. I like it! We are just doing a small, little wedding—me and Brandon and the kids. That is it. All we have time for! But we’re happy with that.” She continued: “We just wanted to make it about us.”

Blackstock’s children already live with the couple, but the singer told the magazine she’s eager to have two more.  What are your thought on Clarkson’s wedding dress? 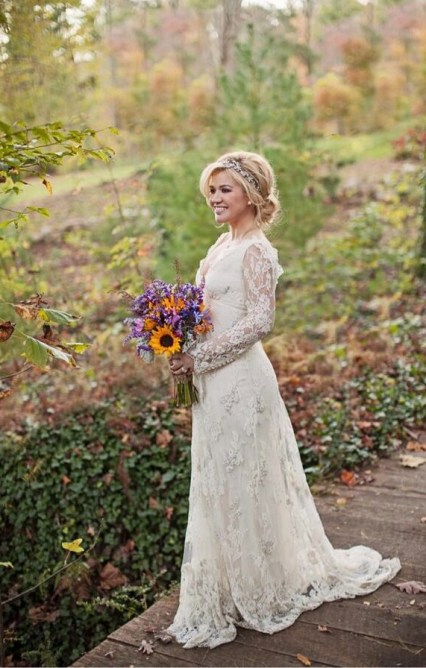