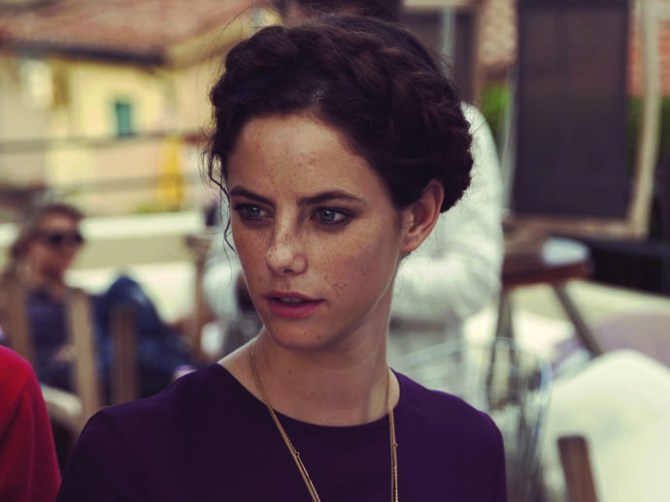 Actress Kaya Scodelario first broke onto the scene in 2007 in the UK TV teen drama “Skins”, alongside future stars Dev Patel and Nicholas Hoult, as the troubled little sister Effy Stonem, a character with a preference for motorcycle jackets, ripped tights, smudged black eyeshadow, and bad behavior. The role put her on the map, and she went on to star in “Clash of the Titans” and  “Moon.”

The 21-year-old’s latest project, though, is what might put her on the map as a fashion star. Scodelario is starring in Salvatore Ferragamo’s online romantic comedy “Walking Stories” directed by Luca Guadagnino, behind the Italian art film “I Am Love.” For “Walking Stories” Scodelario filmed around the world—everywhere from Florence to Los Angeles to London to Shanghai—starring alongside Lauren Hutton and Tom Ellis. And in many ways this project has her following in the footsteps of Hollywood leading ladies like Audrey Hepburn and Marilyn Monroe, who were huge Ferragamo shoe fans.

Ironically, in the first installment, Scodelario is running through the streets of Florence sans shoes. In the second installment, Scodelario dons one of Ferragamo’s most iconic pairs—rainbow suede platforms originally designed in 1938 for Judy Garland.  Naturally, like most women, Scodelario is a bit of a shoe nut. “Of course I love shoes!” she told us. “To me, platforms are the way to go, but I also like a tall leather boot now and then, especially in the winter.”

As for some style tips that Scodelario picked up from working on the short film she shared: “Hats! I never thought about a hat as an accessory but I had some amazing huge floppy hats in the film which made me see how they can work well with an outfit.” Take note: One of those hat moments includes a brown menswear-inspired topper paired with a red long sleeve sheath dress, a look that’s easy to replicate and chock full of cool.

Still, don’t think that Scodelario didn’t pick up anything fashion wise from Effy. “I started ‘Skins’ when I was 14 and I am now 21, so naturally I’ve changed as I’ve grown up,” she said. “But I still love leather jackets which is something Effy taught me to wear well.”

As far as who her style icon is,  this London-based actress’ answer shouldn’t surprise you. “Kate Moss,” she told us. “I know a lot of people mention her but its because she is timeless and effortlessly cool. And she is a Londoner as well which makes all the difference.”

Ferragamo is releasing the video series in eight parts this month, every Tuesday and Thursday, at ferragamo.com. Watch the first installment below.