From her former flings with women to her conservative upbringing, Katy Perry is one celebrity who keeps it real. Good or bad, the 32-year-old is often open and honest about her life. So, when the singer breached the topics of suicide and depression when promoting her new album, “Witness,” she was touchingly raw on what she had to say.

As part of her Witness World Wide event, a weekend-long spectacle held after her album’s drop on Friday, Perry live-streamed her life on YouTube for her fans to see. While a majority of the acts were mundane, like the pop star sleeping or applying make up, there were a few candid moments that really got deep to who the Katy Perry was behind-the-scenes. (For those who don’t know, Katy Perry is a stage name and the singer’s real name is Katheryn Hudson.)

Among those candid moments was an emotional hour Perry spent with Dr. Siri Sat Nam Singh, a licensed therapist who appears on Viceland’s “The Therapist.” During their meeting, the singer opened up about her former thoughts of suicide and how they inspired her 2013 song, “Grace of God.”

“I feel ashamed that I would have those thoughts, feel that low and that depressed,” she said. “You can be right or you can be loved. I just want to be loved.”

Though Perry has been critical of her overly religious upbringing, she admitted that “Grace of God” was written “because I do believe in something much bigger than me and I call that god for me.”

Digging into the source of her depression, Perry discussed the pressure she feels living “under this crazy microscope.” She referenced the difficulty of upholding the persona of “Katy Perry” and how that influenced her to recently chop off her hair into a blonde pixie.

“People talk about my hair, right, and they don’t like it, or they wish that it was longer,” she said. “I so badly want to be Katheryn Hudson that I don’t even want to look like Katy Perry anymore sometimes, and that is a little bit of why I cut my hair.”

She also mentioned that her desire to shed her pop star mask is the reason why fans are seeing a sillier side of her recently.

“I’m a bit more nerdy than everybody thinks I am,” Perry said. “I’m a big goofball. The fantasy of Katheryn went into Katy and made this bigger than life personality.” 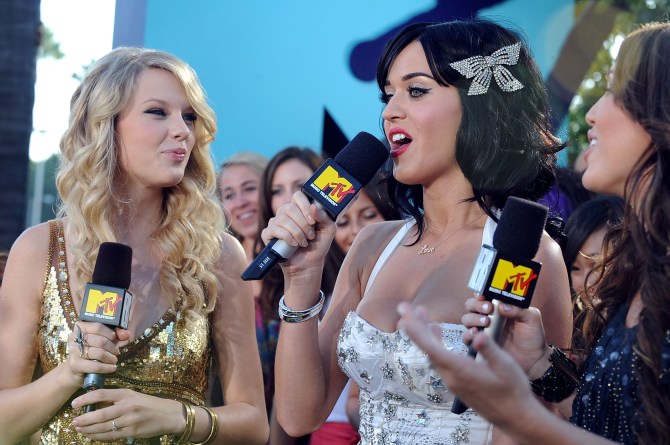 The singer’s candidness might have translated over to other interviews, too. When talking on Arianna Huffington’s Thrive Global Podcast on Saturday, the singer admitted that she’s ready to let go of her long-time feud with Taylor Swift.

“I am ready to let it go,” Perry said. “I forgive her and I’m sorry for anything I ever did, and I hope the same from her. I think it’s actually like, I think it’s time. There are bigger fish to fry, and there are real problems in the world. You know what I’m saying?”

Perry, who’s spent a lot of her recent press tour defending her side of the feud, praised Swift for her songwriting talent and positive image for young women. The argument involved shared backup dancers in 2014.

“I love her, and I want the best for her,” she continued. “And I think she’s a fantastic songwriter, and I think that if we, both her and I, can be representatives of strong women that come together despite their differences, I think the whole world is going to go like, ‘Yeah, well we can do this.’ I don’t know. Maybe I don’t agree with everything she does and she doesn’t agree with everything I do, but I just really, truly want to come together in a place of love and forgiveness and understanding and compassion.”

Katy Perry or Katheryn Hudson, thanks for keeping it real.