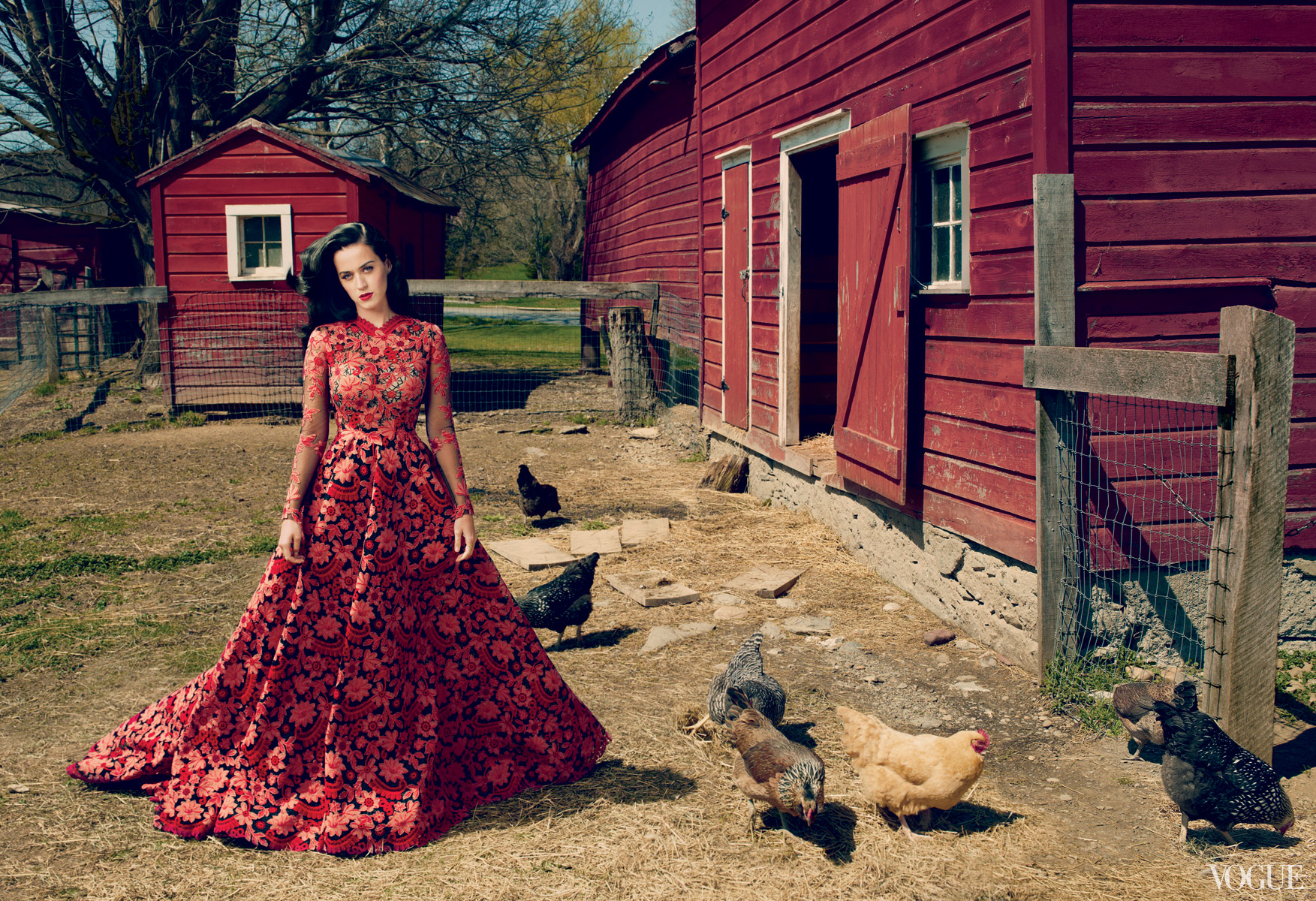 While initial images leaked last Friday, we had no idea what was inside the July issue of Vogue, which marks superstar singer Katy Perry‘s first cover.

Although the Annie Leibovitz-shot spread is certainly pretty, it’s a bit of a snooze. Perry shows off her newfound high-fashion prowess in looks from designers like Valentino (above), Dolce & Gabbana, and Prada, but they fail to make a major impact. What does pique our interest, however, is the accompanying article, where she spills on her love life for the first time. Read on for the best (and juiciest) quotes!

On ex-husband Russell Brand
“He’s a very smart man, and I was in love with him when I married him,” she said. “Let’s just say I haven’t heard from him since he texted me saying he was divorcing me December 31, 2011.” A text message divorce?! Ouch!

On Brand’s sense of humor
“Hysterical in some ways. Until he started making jokes about me and he didn’t know I was in the audience, because I had come to surprise him at one of his shows. So. Hysterical to a point. I mean, I have to claim my own responsibility in things. I do admit that I was on the road a lot. Although I invited him time and time again, and I tried to come home as much as I possibly could,” she said.

On Brand being controlling
“At first when I met him he wanted an equal, and I think a lot of times strong men do want an equal, but then they get that equal and they’re like, I can’t handle the equalness. He didn’t like the atmosphere of me being the boss on tour. So that was really hurtful, and it was very controlling, which was upsetting. I felt a lot of responsibility for it ending, but then I found out the real truth, which I can’t necessarily disclose because I keep it locked in my safe for a rainy day. I let go and I was like: This isn’t because of me; this is beyond me. So I have moved on from that.”

On Mayer’s controversial personality
“All I can say about that relationship is that he’s got a beautiful mind,” she said. “Beautiful mind, tortured soul. I do have to figure out why I am attracted to these broken birds.”

On being single
“I’m not in a relationship, I’m just on my own—I am myself in my own bed,” she said. “I have to be happy being alone, and I am happy.I believe that I will be loved again, in the right way. I know I’m worth it.” Is she angling for a L’Oréal contract?

We can’t get over the text message divorce—or the fact that she ran into Orlando Bloom and Miranda Kerr while at lunch with the interviewer! Check out Vogue now for the rest of the piece.

MORE ON STYLECASTER:
Katy Perry and John Mayer Split: How The Break-Up Will Impact Her Style
Katy Perry’s First Vogue Cover is Here
Russell Brand & Katy Perry Are Getting A Divorce