Now that her winner is revealed, Bachelor Nation members want to know if Kate and Blake are still together after The Bachelorette 2021 or whether their final rose has already died.

Katie Thurston, a 30-year-old bank marketing manager from Renton, Washington, chose Blake Moynes, a 30-year-old wildlife manager from Ontario, Canada, chose Blake as her winner on the season 17 Bachelorette finale on Monday, August 9. Blake, who was also a contestant on The Bachelorette season 16 with Tayshia Adams and Clare Crawley, joined Katie’s season in episode 5 after he asked Tayshia, who is the host of this season, to introduce them.

In an interview with Us Weekly in June, Katie revealed that she and Blake DM’d before he came on her season, but their relationship wasn’t romantic. “I definitely knew who he was, which also Tayshia’s ex-boyfriend! So that’s weird,” she said. “We had chatted before, but usually what happens is, like, the guys will reach out to the women once they’re eliminated and be like, ‘Good luck, you did great.’ Like very generic, you know? And so to see him, I was like, ‘Why is he here?’ Like, ‘What’s happening?’”

Blake confirmed in an episode of the “Click Bait” podcast in July that he DM’d Katie after the first episode of The Bachelor season 25 with Matt James, which Katie was on, but she was “cold” toward him. “When I actually reached out that first time, after the first episode, her responses were very cold back,” he said. “She was nice, but she didn’t open up her dialogue in any way. It was shut down right then and there.” Still, Blake told the podcast that he knew from Katie’s limo entrance that he was interested in her. “It was right after her first episode, it was right away. This is where people, I think, can take what I’m about to say one way or another,” Blake said. “She came out of that limo with that vibrator, I was like, ‘Yeah, I like what she’s about.’”

As for what he wrote in his first DM to Katie, Blake confirmed that the message was casual. “It was a simple reach out. It was like, ‘I fucking love that you did that. That was fucking awesome, like, good for you,’ this and that,” Blake also revealed that it wasn’t until Katie was announced as the next Bachelorette that he considered pursuing her.  “‘What if I just f–king do this and show up?’” he recalled thinking. 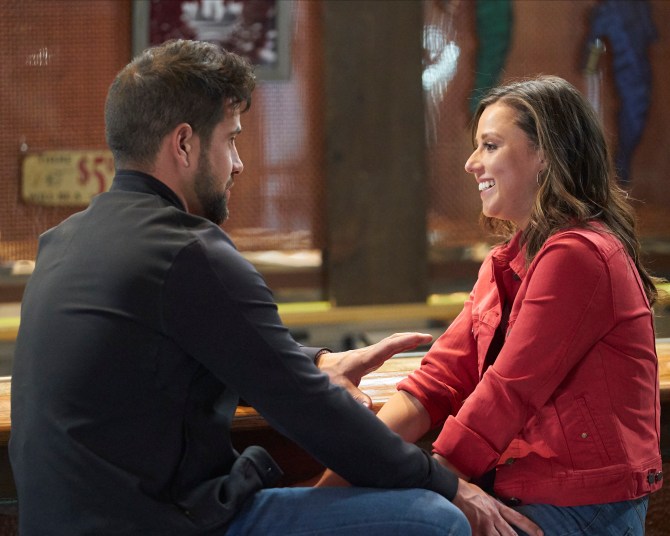 Is Katie engaged from The Bachelorette 2021?

So are Katie and Blake engaged after The Bachelorette 2021? Reality Steve confirmed in July that Blake proposed to Katie at the Final Rose Ceremony, and she accepted, which means they’re engaged and fiancés.

Are Katie and Blake still together from The Bachelorette 2021?

The big question: Are Katie and Blake still together after The Bachelorette 2021? The answer is yes. Reality Steve confirmed in an Instagram post in August that Katie and Blake are still together and engaged. Katie also confirmed in an Instagram post in August that she’s still with her winner. “I’m in love,” she captioned a selfie. Reality Steve also reported in August that Katie wants to move to San Diego from Washington, so it’s likely that Blake, who is from Canada, will move for her instead of the other way around.