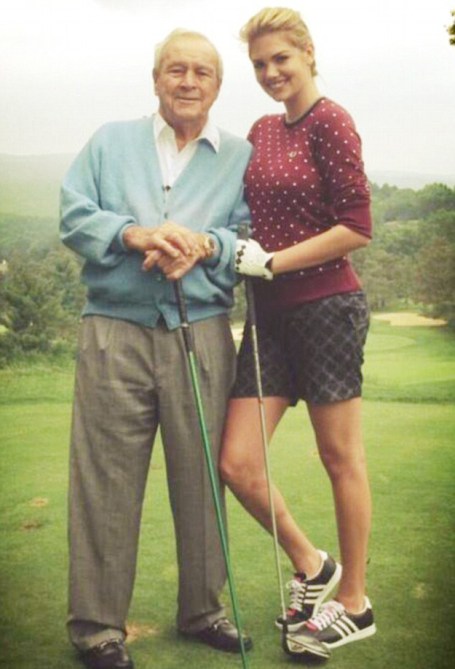 End your day with some eye-grabbing Internet news!

1. Kate Upton will appear in, get this — Golf Digest’s December issue. In this exclusive behind-the-scenes video, the supermodel wears mis-matched patterns and helps gold legend Arnold Palmer with his swing. [Golf Digest]

2. Social media’s favorite early adapter, and all-around PR genius, Aliza Licht, aka DKNY PR Girl, announced via her Instagram feed she’s received a book deal. No word on the title or when it will be released, but we’re hoping for some good fashion industry scoop.  [Fashionista]

4. Some people are terrible at goodbyes, namely Cher, who announced today she’ll be going on a 49 city North American tour called ‘Dressed To Kill ‘ starting March 2014.

5. As the artistic director of Condé Nast since March, Anna Wintour has been busy revamping Lucky and Traveler, both of which were flailing, and now it’s being reported she’s taking on Glamour, a publication with a large print circulation that’s experiencing a drop in ad pages. [New York Times]

6. We’re hardly surprised Ivanka Trump’s bedroom is as glam as it gets, in this week’s featured room. [The Vivant]

8. Here’s how to get Zooey Deschanel’s checkered nails from the Emmys. [Daily Makeover]

MORE: Selena Gomez Lunches With Anna Wintour: 5 Things They Could’ve Been Talking About