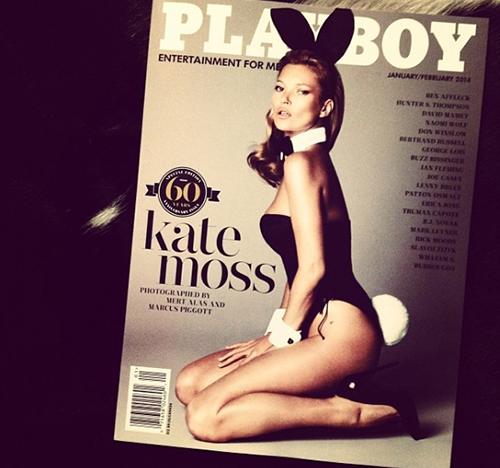 Kate Moss is turning 40 this year, but she’s not heading into her fourth decade quietly. Instead, as we reported last month, she’s posing for Playboy, and today the first photo emerged.

In the picture, Moss poses in the mag’s iconic  bunny suit, positioned on all fours as a half-woman, half-rabbit temptress, and photographed beautifully by Mert Alas and Marcus Piggott. The shots will appear in the January/February issue, done in honor of the mag’s 60th birthday. Kate joins other notable supermodels like Naomi Campbell, Cindy Crawford, and Elle MacPherson, who’ve all graced Playboy’s lascivious pages at one time or another.

Compared to some of her more provocative high fashion shoots (we’re thinking specifically of the time she appeared naked on the cover of V magazine) this seems pretty tame. The woman’s been totally naked on camera more times than we can count. Still, we have no doubt she’ll make the bunny tail look really, really, good.