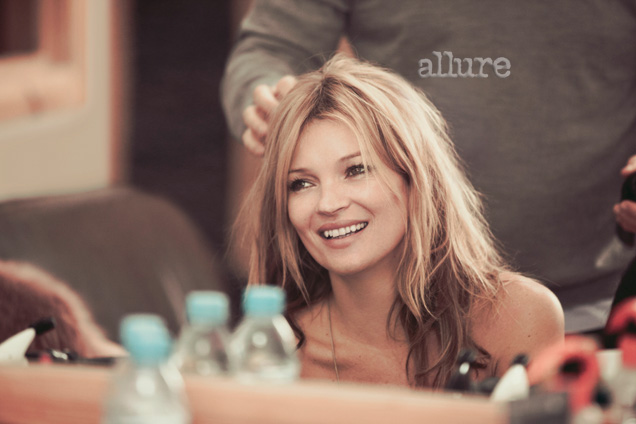 Kate Moss may be one of the most famous models of all time, known for her hard partying ways as much as her runway prowess and ability to sell out clothing items at a rapid pace. However, these days, one of the 39-year-old fashion industry veteran’s favorite jobs is mother to her ten-year-old daughter Lila Grace.

Many have speculated that Lila is likely to follow in her famous mom’s footsteps—after all, what else would you do when you’re just blessed with remarkable genes? But for now, Lila’s interests strictly lie in the world of fantasy, and it seems she’s taken a serious liking to the flick “The Devil Wears Prada.”

“She’s got a desk in her room with a phone …. She puts a little outfit on and picks up the phone: ‘Hello, Miranda Priestly’s office. Can you hold? Patrick Demarchelier on the line!'” Moss said of her daughter in the August issue of Allure. “I died when I heard her do it. So funny. She doesn’t have a clue who it is, but it’s word for word. She wants to be Anne Hathaway.”

Of course, “The Devil Wears Prada” is a thinly veiled account of an assistant’s difficult life at Vogue, a publication which Moss (and Lila, who appeared in the September 2011 issue which profiled her mother’s wedding to rocker Jamie Hince) is very familiar with. So chances are, if Lila really wants to become Anne Hathaway’s character, Moss can probably just make a quick phone call.

Moss also told Allure that although she’s one of the most legendary supermodels of all time, she’s been wrought with insecurity over the years. “I didn’t like my flat chest,” she said. “I was like, ‘Oh, I’m going to have a tit job.’ Can you imagine?” However, as time went on, and she showed off her body in more and more high-profile spreads, she became far more confident.

To read more from Moss and see gorgeous pics taken by her close friend Mario Testino, check out Allure now!