A new royal biography is out, and it contains some surprising claims about Kate Middleton’s intervention before Prince Harry and Meghan Markle’s marriage. Apparently, the Duchess of Cambridge, 38, may have stepped in to “warn” Harry, 35, about things moving too fast in his relationship with Meghan, 38, long before the pair got married in May 2018 at St. George’s chapel.

In Royals at War: The Untold Story of Harry and Meghan’s Shocking Split with the House of Windsor, released June 30, 2020, royal journalists Dylan Howard and Andy Tillett drew several conclusions about the Cambridges’ reaction to Meghan. According to them, both Prince William, 38, and Kate, had their worries about Harry’s new relationship. For William, his concerns “came from wondering whether his brother was quite sure he wanted this whirlwind of Californian energy and dynamism taking over his life,” the authors write in reference to Meghan, who grew up in Los Angeles—and where she and husband Harry have since moved to following their royal exit.

At first, Royals at War suggests that “gentle” warnings came from Kate, who Prince Harry once called the “big sister I never had” in an interview with the Daily Mail. The Duchess of Cambridge reportedly urged him to “go slow,” and “reminded him that he was dating someone with a completely different life, past, and career and it would take time, care, and attention for them to integrate.” 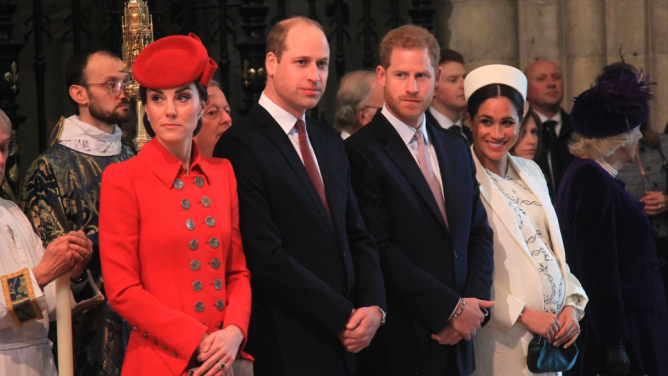 Given Kate and William’s proposal timeline, the Duchess’ advice makes sense coming from her. The pair waited nearly 10 years before getting engaged to one another—meanwhile, Meghan and Harry’s 2-year blitz from dating to marriage could seem speedy in comparison. Yet, according to Royals at War, Harry “didn’t take well” to the words of caution by his family.

A royal courtier is quoted saying that Harry was “so sensitive” to comments by his family because he “feels he couldn’t protect his mother, so he’s going all out to protect his wife.” The authors compounded this claim by portraying Harry’s attraction to Meghan as part of that narrative: He was “subconsciously seeking a figure to replace the mother so cruelly torn from his at a vulnerable age,” they write, referencing Harry’s mother, the late Princess Diana. To him, “Meghan’s confidence, commitment, drive, and ambition were irresistible,” as a result. Sounds Freudian, but OK. An alternative theory: Maybe he just loves Meghan for being Meghan? Shocking, I know!

Either way, we’re happy as long as Harry and Meghan are happy. The pair have been busy ever since stepping down as senior royals in January, spending plenty of time with their son, Archie (who literally just started talking—my heart), and in their free time, they are doing the good work of organizing charity events. It doesn’t get much better than that.