I think that celebrations are in order: The Duke and Duchess of Cambridge are celebrating their tenth wedding anniversary on April 29! To celebrate the major milestone, the often-private couple released two new smiley portraits, posted to their official Instagram page. Prince William looked nice, but I’m here to talk about the stunning summer sundress that Kate Middleton was wearing in both shots. Seriously—where can I find myself a stylist that’s on this royal level??

It’s hard to believe that Prince William and Kate Middleton have been married for a decade. Way to make me feel old at 25, you two! Now, rather than just obsesses over her Alexander McQueen wedding dress and usual appearance garb, I have a new look that I can freak out over to commemorate the occasion—a dreamy blue floral midi dress from none other than UK-based label Ghost London.

And it’s not even expensive!!! Middleton’s dress retails for 195 British pounds—at least, it did before it was sold out everywhere. I mean, It was basically a goner once those images of the happy couple hit Instagram. Middleton can sell a dress like nobody’s business! If you managed to get the coveted frock for yourself, consider me very jealous.

In his post of the new portraits, which show the happy couple sitting in the grass at Kensington Palace, photographer Chris Floyd shed some light on the experience in his caption. “I recently visited Cambridge for the first time in my life. That same day, by an astonishing coincidence, was also the day I was asked to photograph The Duke and Duchess of Cambridge for their tenth wedding anniversary,” he shared. Seriously, what are the odds?

But let’s get back to the important stuff, A.K.A. the dress. I can’t say that I’m surprised about how quickly this frock sold out. The lightweight wrap style featured not one but two dainty blue floral patterns for a little contrast, sheer long sleeves and a layered blue chiffon skirt that hits just above the ankles. Fashion girls, take note: This is a perfect wedding guest dress if I’ve ever seen one!

If you happen to recognize this particular piece, it’s because Middleton has actually already worn it! She brought it with her on a tour of Pakistan back in October 2019. No official photos were ever released of her in the dress from that trip, but eagle-eyed fans posted pictures of her wearing it on social media. Kate Middleton, you are an outfit repeater!!!

Not that I’m upset about that, TBH. This just proves that even the freakin’ Duchess of Cambridge knows a good steal when she sees one—and understands that you absolutely should be wearing all of your favorite pieces more than once! Plus, she’s no stranger to wearing more affordable brands during her time as a royal, something I’ve always appreciated about her look. 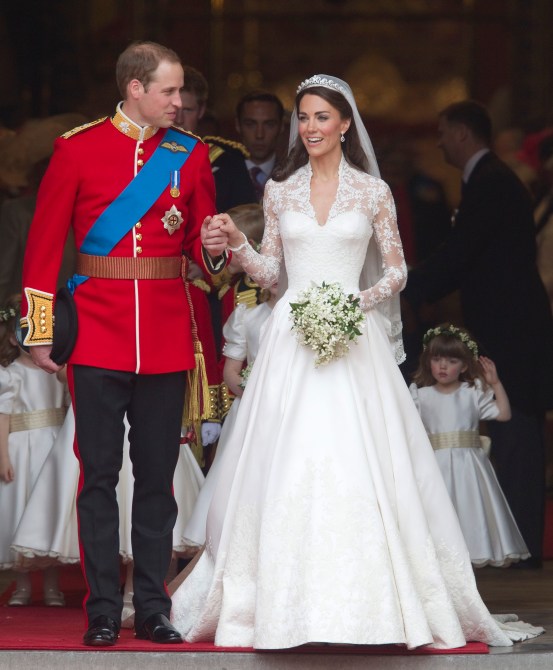 That said, I think we can also use this 10th wedding anniversary to celebrate another dress—Middleton’s breathtaking wedding gown, which has most definitely stood the test of time. It still gives me goosebumps!

Congrats to the two love birds and here’s to more fierce (and affordable) ‘fits from Kate over the next 10 years!