In an era where various genres and types of television shows are abundant, there is nothing quite like TNT’s dramedy, Claws. The series follows nail salon owner, Desna Simms (powerhouse Niecy Nash) and her rag-tag crew of nail technicians who find themselves entangled in various nefarious crimes and delicious foolishness. Since Season 1 of the critically acclaimed series, actress/model Karrueche Tran has portrayed Virginia, a rambunctious former exotic dancer who finds herself drawn to Desna and the ladies despite all of her efforts to appear unbothered.

Heading into Season 3–the Florida-set drama is about to reveal just how iconic these ladies are. In the Season 2 finale, we watched Desna kill her mob boss hubby Dr. Ruval (Jimmy Jean-Louis), by throwing him over a hotel balcony after a scuffle. With Ruval in the ground, Desna has come into quite the inheritance; a casino that might be her key to a new level of success.

Unfortunately, Virginia was shot in the season finale after taking a bullet for Desna. Though we know from the trailer that she survives her wound–the impulsive pint-sized manicurist, won’t ever be the same. Ahead of the Season 3 premiere, STYLECASTER got the opportunity to sit down and speak with Tran about Claws, why her sole focus is leveling up, and what she’s got up her sleeve next. 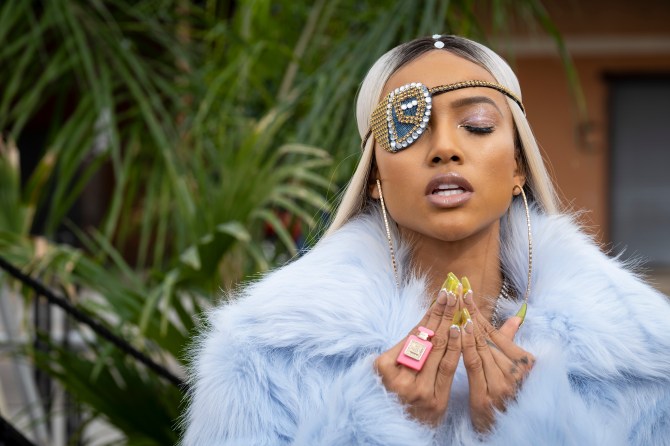 “I’m a fairly new actress,” Tran explained when reflecting on her career. “I love to explore different traits and characters because I’m still progressing as an actress. It just feels very empowering to be on a show like Claws where we’re all badass women, but we’re all still lovers, and we’re fighters. We’re fighting to survive. We take care of what needs to be taken care of all while being fly and still having our own personalities. I think it’s so amazing that we’re able to embrace all of our individuality, our beauty, and even our flaws.”

Virginia has grown tremendously since Season 1 when she was trying to scam her way into Desna’s crew and into Roller’s (Jack Kesy) bed. However, the injury that she sustained from her gunshot wound in the Season 2 finale will change everything we thought we knew about the woman who loves to embellish the truth. “Virginia’s still alive, but she’s a whole new person in that sense,” Tran said cryptically. “She’s wearing an eye-patch and has kind of a new perspective of life and a new type of mentality. She is the youngest one out of the bunch, so she’s growing into herself and finding out what she really wants in life. It’s kind of cool because I’m 31 now, and I’ve kind of already been through that phase, so I’m able to relate to Virginia in that way and bring personal experiences into my work.”

It might appear that we’ve seen it all on Claws in its first two seasons, but according to Tran, we haven’t seen anything yet. “This season is about the girls leveling up and stepping into this new phase and this new luxury of their life,” she explained. “Something that they’s not necessarily used to. Also, our style has definitely evolved. We’ve got a little bit of extra money now, so we can splurge a little bit more on our outfits and makeup and heels. This season, you will see that on the screen as well. Just our entire looks and our energy is just very much elevated–but elevated in the palm ghetto way.” 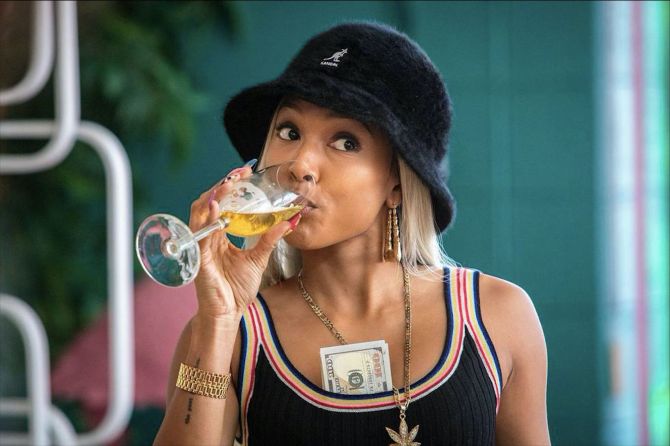 One of the things that makes Claws so juicy is the complexity of the characters. Though the women are complicated in and of themselves, Desna’s new partners at the casino, Mac (Michael Horse) and Melba (Rebecca Creskoff) –are unlike any villains we’ve ever seen on TV. “It’s one of those Clawsian moments,” the Los Angeles native chuckled. “It’s one of those things where it’s like, it doesn’t make sense, but it makes sense. And it’s like you’re weirded out, but you’re intrigued. It’s like what’s going on? But you’re still so invested into their story. What are they up to? So they are very different villains then we’ve had before, and they bring some extra flavor to the show.”

Another sector of the Claws lore that has taken on a life of its own is Tran’s relationship with her mentor/co-star, Niecy Nash. “I have so much fun literally just getting on her nerves and just bugging her,” the Nice Guys actress smiled.  “Niecy plays many roles. She’s played the mother; she’s played the mentor, she’s played the big sister. So, in this case, it’s like a big sister, little sister. I’m just all in her face and just all up in her grill, and it’s a lot of fun, and we enjoy it. I think it brings just great energy to the set and we like to laugh and have fun with one another. Because we’re working for six months out of the year, she’s away from her family; she’s away from her kids. We’re all away from our families and the others who have kids as well. So I think it’s imperative to have fun and just enjoy life while you’re in that moment. And so all of us ladies have so much fun together. We enjoy each other’s time. As each season goes by, our bond becomes closer, and it’s fun. It’s a fun environment for all of us.”

In addition to Claws, Tran is searching for opportunities that speak to her soul. “I’m open to anything because you never know what may come about,” she revealed. “Just like with acting I worked hard towards it. If I read the script or and I’m into it–I’m totally open to a lot of different genres because I want to excel and progress as an actor. I want to be on the big screen eventually, in movies and in anything that’ll help me exercise my artistry and my creativity. I try to tell people I don’t always do things for the money. Money is great girl. I would love all the money in the world. But it’s more so for the experience and for the growth. And that’s where I feel like I grow the most and I blossom the most is through experience”

As far as this season of Claws goes, hold on to your bedazzlers. “If you thought that it couldn’t get any crazier, like, girl, please,” Tran laughed.