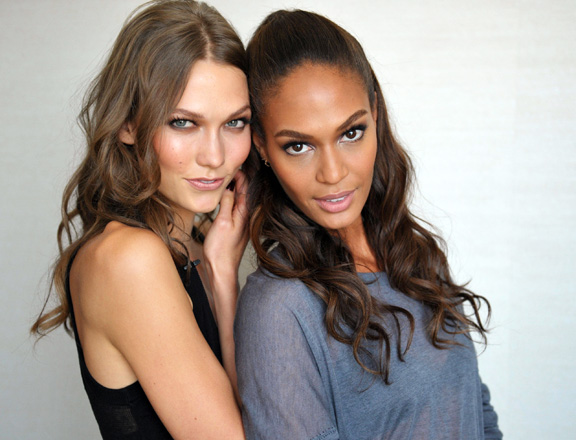 The model of the moment may be Cara Delevingne thanks to her quirky style and fun-loving personality (not to mention that she’s always the life of the party and pals around with stars like Rihanna), but when it comes to supermodels, there’s no competition: Karlie Kloss and Joan Smalls are the leaders of the pack.

The 21-year-old and 25-year-old aren’t simply catwalk queens who serve as vehicles of showing off designer duds. They’re both interested in other projects (and co-hosted MTV’s “House of Style” reboot last year), with Smalls hoping to launch an acting career and Kloss studying at NYU as well as working on Karlie’s Kookies, her delicious cookie collaboration with Momofuku that benefits the FEED Foundation. But sometimes too much fame can have a dark side. In fact, they claim it’s prevented them from booking runway gigs.

When asked by Vanity Fair what the top excuse designers give them for not casting them in a show, Kloss replied, “‘You are too famous,'” and “‘No one will pay attention to the clothes.'” Meanwhile, Smalls chimed in, stating that people have repeatedly told her, “You are just too big.”

Frankly, they have a point—having a high profile model in your runway show can be detrimental to how the collection is perceived, but it also drives tons of publicity to the line. Designers are still clamoring for even more established supers like Naomi Campbell and Kate Moss to close or open their shows.

Sigh. Being too famous to be in a runway show—what a unique and fabulous problem to have!
MORE ON STYLECASTER:
Cara Delevingne Gets Lion Tattoo On Her Finger
Instagram Insanity: 15 of Rihanna’s Most Provocative Pictures
What Was Karlie Kloss’ Most Scandalous Moment Of the Year?
Underwear Models Through the Decades
Tags:
StyleCaster