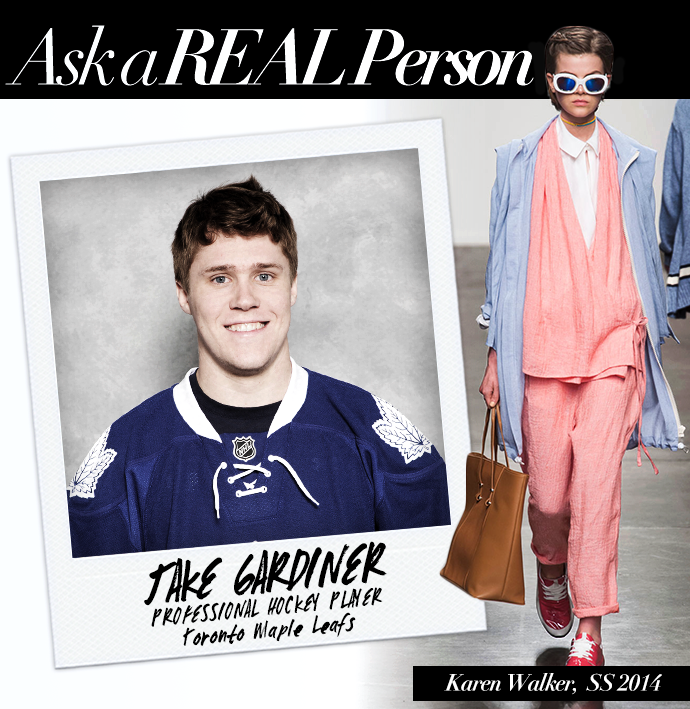 We’re pretty confident the headline you just read pretty much tells you everything you need to know about what’s to come.  Just in case you’re still unclear, however, here’s a primer: Throughout New York Fashion Week, we decided to ask a real person—i.e., one that doesn’t work in or follow fashion—to share their thoughts on a particular look from any given runway show.

MORE: Ask a Real Person: A 7-Year-Old on Creatures of the Wind

Why? Because sometimes it’s key to remind ourselves that the world doesn’t revolve around coats, Céline, and Carine.

Next up: Professional hockey player Jake Gardiner, defenseman for the NHL’s Toronto Maple Leafs. Jake took time out from NHL training camp (which kicks off today) to weigh in on a look from Karen Walker Spring 2014. Here’s what he had to say.

Hey Jake! Tell us the truth: What do you think of this outfit?
It looks like a stylish grandma.

Where do you think this girl is going?
She’s going lawn bowling, or [to] bridge … whatever’s on the agenda that day.

What would you add or take away from to the outfit make it better?
I’d like to see it in a smaller size.

In what stores would you guess they sell this designer’s clothes?
JC Penney?

Would you date a girl wearing this?
Doubtful.

What do you like to see a woman wearing?
Jeans and a T-shirt.

Quick: What’s the first womenswear designer you can name?
Oprah?