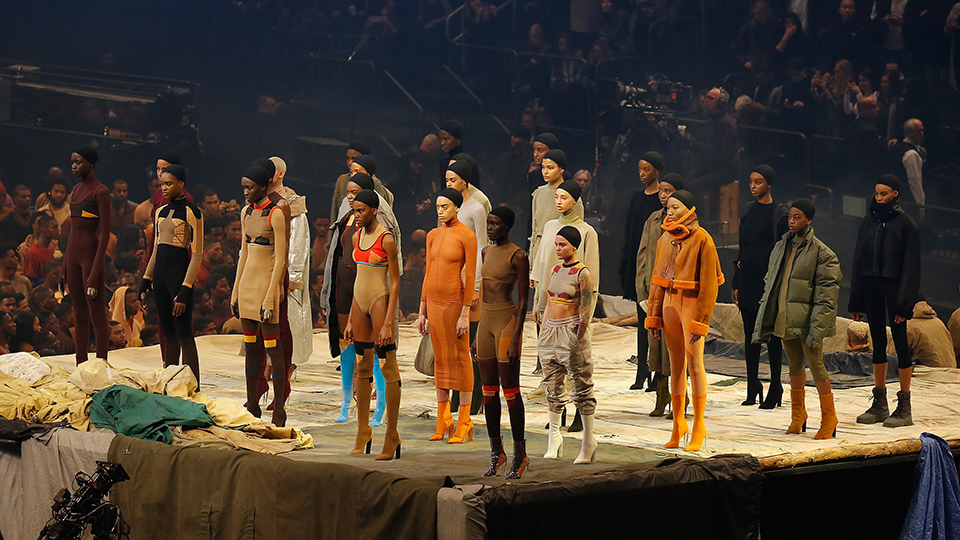 By this time, we should all be used to Kanye West’s Fashion Week antics—a shameless disregard for scheduling, a super-hyped celebrity front row, and earnest rants that stem from Kanye’s belief that the industry will never accept him as a true designer, since he’s a rapper from the south side of Chicago who doesn’t quite follow the rules of the status quo.

The truth of the matter is that this is all correct—he is a rapper from the south side of Chicago, the fashion industry does not necessarily claim him as one of their own, and he definitely follows no status quo, but that’s also probably the reason why thousands of people cleared their schedules (ourselves included) on Thursday afternoon for the chance to witness Yeezy Season 3 and the world debut of Kanye’s latest album, The Life of Pablo at Madison Square Garden.

The anticipation of the event was ratcheted up by West’s recent Twitter outbursts—at once amusing and ridiculous, but also petty, vindictive, and downright ignorant and offensive. His polarizing tweets, however, seemed to have little negative effect on the turnout of the event, which filled most of Madison Square Garden and was also streamed live on Tidal and in movie theaters worldwide. 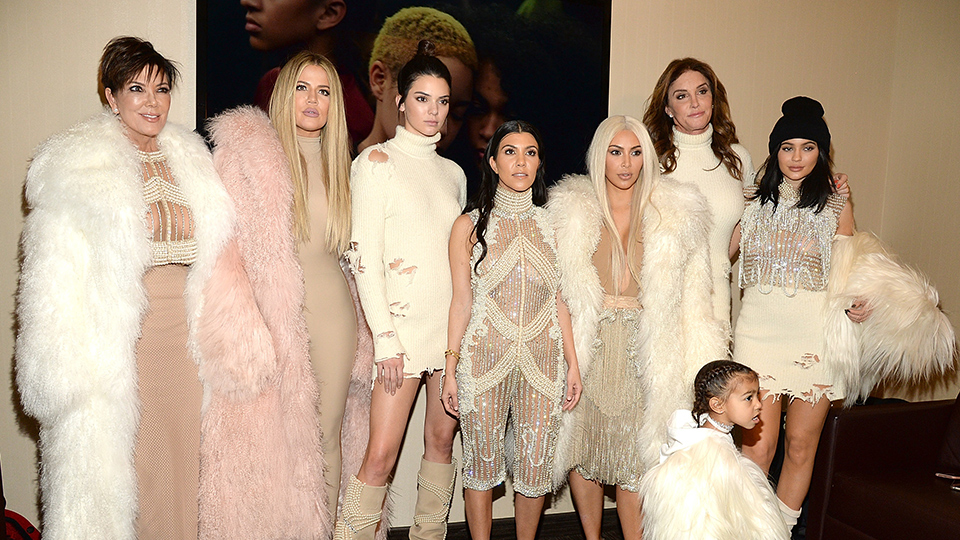 Certain aspects of the show were as predictable as clockwork—the entire Kardashian-Jenner clan entered clad in custom Yeezy x Olivier Rousteing designs (that they created in just five days), which consisted of deconstructed sweater dresses for Caitlyn and Kendall and shaggy furs and jeweled bodysuits and dresses for the rest of the ladies. Kim donned a long platinum wig, looking somewhat like a Kanye fantasy of Donatella Versace, while Rousteing and Carine Roitfeld sat in the Kardashian family’s section, along with Lamar Odom in his first public outing since he was hospitalized and entered rehab last year. 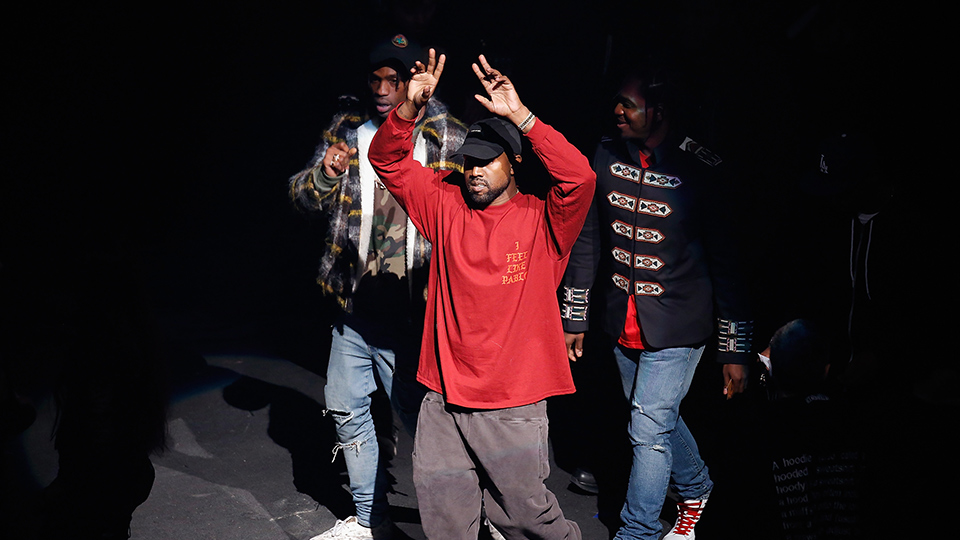 Kanye himself was dressed in a red sweatshirt emblazoned with his album’s final name iteration, The Life of Pablo (which makes us think that all the album name changes on Twitter were calculated trolling). This same sweatshirt, as well as beanie hats and other merchandise caused queues that would make the line of hypebeasts outside the Supreme store look short, both before and after the show.

Also predictable was his collaboration with artist Vanessa Beecroft, who designed the performance aspect of the presentation and who worked with him on all previous Yeezy presentations and the Yeezus tour.

Other things were positive surprises—the show started in a fairly prompt manner, only half an hour after its listed time, pretty standard for any major fashion show and much more punctual than past Kanye productions. This may have been due in part to Beecroft’s presentation, which began as a huge fabric-covered dome that then revealed two raised platforms of models once Kanye started playing his album. The platforms were completely surrounded by 1,200 extras crowded below in a shantytown-like amalgamation, all clad head to toe in West’s pricey signature athleisure in warm shades of orange and red—a welcome change from his nude- and flesh-colored presentation last season.

As for the silhouettes being featured at the presentation, there were still plenty of dystopian-flavored high-cut leotards, body stockings, and holey Haider Ackerman-esque sweaters that will no doubt be ridiculously overpriced, but there were also pieces that felt akin to something that the Kanye of yesteryear would have dressed Amber Rose in for a trip to the couture shows—skintight ribbed midi dresses worn sans bra that emphasized curves, glossy-heeled ankle boots that have already raised eyebrows with their uncanny similarity to Raf Simons’ Lucite-heeled beauties from Dior Fall ’15, and floor-length furs—two of which appeared on iconic models Naomi Campbell and Veronica Webb, two more welcome surprises to Kanye’s production. 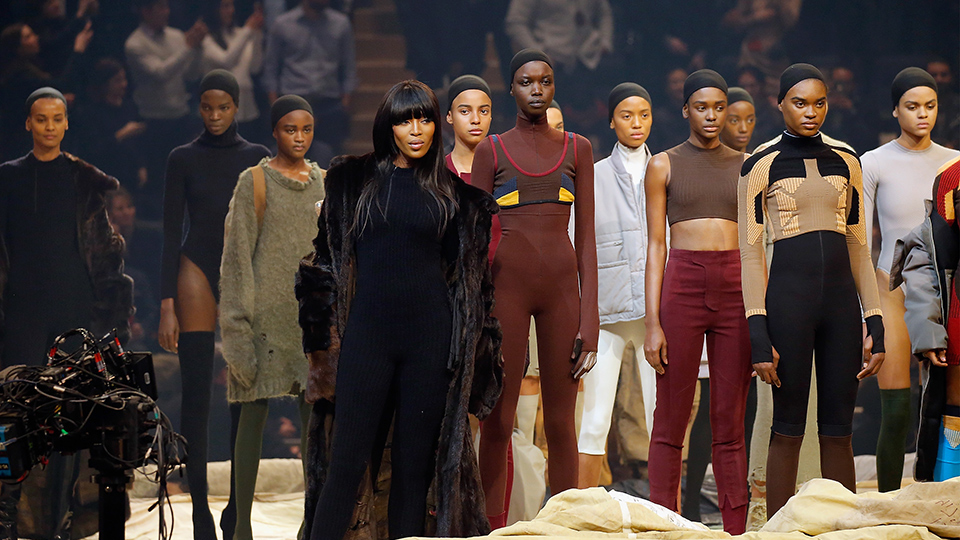 West’s trademark casting for his shows has emphasized body and racial diversity, which he achieved by casting mostly unknown models, with a few celebs here and there, such as his sister-in-law Kylie Jenner for Season 1, Bella Hadid for Season 2, and cool teen Luka Sabbat for all previous seasons. His casting of  Campbell and Webb this season, along with Liya Kebede and rapper Young Thug, can be further read as an industry power move.

When it came to the album debut, it mainly consisted of Kanye plugging in his laptop and playing DJ to the Garden, while surrounded by the A$AP mob, Jay Z, and Nick “Swaggy P” Young, among others. That’s not to say that this performance was anything low-key—Kanye worked the crowd, asking if he had “delivered on the album,” which was met with resounding applause and soon devolved into a crowd-initiated, Kanye-endorsed chant of “Fuck Nike!” and “Kanye!”

LIVE on #Periscope: We're at the #YeezySeason3 and #TLOP presentation with @kanyewest #NYFW https://t.co/Rf6UNPPpxe

Other noteworthy soundbites from the event involved Kanye reverently calling Carine Roitfeld a “real bitch” for her support of Kim Kardashian West and his ventures and referencing his backstage conversation with Anna Wintour in which he told her that he wants to be the creative director of Hermes. Yeezy Season 3 today, tomorrow, the world.

After the new music listening party was finished, Kanye shared a video game based on the premise of his song, “Only One,” which focuses on his late mother, Donda, before leaving the deejaying to friend and frequent collaborator Virgil Abloh. For all his controversy in recent weeks, the Kanye presenting Yeezy Season 3 was merely an excited, if somewhat eager, artist looking to show his clothes, throw a listening party, and get a little love and recognition.

“It’s not easy to do, man,” West remarked at one point during the presentation. “Y’all acting like this shit regular.”