Making his rounds. Kanye West’s “White Lives Matter” shirt is making him beef with a lot of celebs. After his Yeezy fashion show during Paris Fashion Week on October 4, 2022, Ye debuted the controversial shirt with conservative podcaster Candace Owens.

The DONDA artist received a lot of criticism about how dangerous the slogan is from various people in the industry. The most notable one is between him and Gigi Hadid and her friend Gabriella Karefa-Johnson. Ye attacked fashion editor Gabriella via social media and the two have continuously argued with each other on social media. But Gigi called Ye out for being a “bully” and stood by Gabriella in her defense. Since the debut of the shirt, Kanye called out many people, including his friends, who opposed his shirt.

In an interview with Tucker Carlson, Ye revealed why he ended up making the shirt. “My so-called friends/handlers around me told me if I said that I liked Trump that my career would be over. That my life would be over,” Kanye said. “They said stuff like people get killed for wearing a hat like that. They threatened my life. They basically said that I would be killed for wearing the hat. I had someone call me last night and said anybody wearing a ‘white lives matter’ shirt is going to be green-lit. That means they are going to beat them up if I wear it. I’m like, you know, ‘Okay, green light me then.’”

Read below about the celebrities who are feuding with Kanye West for his “White Lives Matter” shirt. 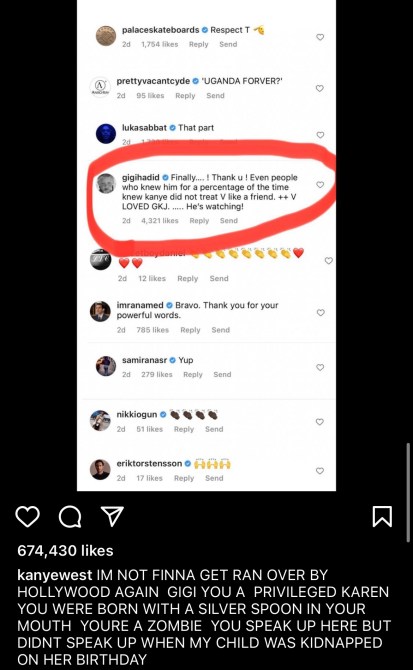 On October 4, 2022, Gabriella Karefa-Johnson, a stylist and global Vogue contributing editor, claimed that Kanye’s message of “White Lives Matter” during his Paris Fashion Show was “dangerous.” In an Instagram story, she said, “I guess I get what he tried to do— he thought it was Duchampian. It wasn’t. It didn’t land and it was deeply offensive, violent and dangerous. Kanye responded to her story through cryptic Instagram posts by saying that Karefa-Johnson “is not a fashion writer” and proceeded to say “You speak on Ye Ima speak on you Ask Trevor Noah.”

In a screenshot of a conversation with his friend Mowalola that he posted on Instagram, Mowalola told the “Heartless” rapper that he “shouldn’t insult the writer” and that he “could actually have a conversation about the tee.” On his Instagram post, Gigi commented, “You wish u had a percentage of her intellect. You have no idea haha…. If there’s actually a point to any of your shit she might be the only person that could save u.” She continued defending her close friend and collaborator, “As if the “honor” of being invited to your show should keep someone from giving their opinion ..? Lol. You’re a bully and a joke.”

Ye claimed that he and Gabriella did have a conversation about the shirt. However, Gabriella posted about how much support she got because of Kanye’s statement. “Your girl has been through it! I’m exhausted, but I am so moved by and grateful for the outpouring of love I’ve received (here and elsewhere) over the last 24 hours. I feel so blessed to belong to a community that would show up for me like this,” she wrote in an Instagram story. Vogue issued a statement in the editor’s defense. “Vogue stands with Gabriella Karefa-Johnson, our global fashion editor at large and longtime contributor. She was personally targeted and bullied. It is unacceptable,” the outlet said.

Kanye vamped up his beef with Gigi on October 7, 2022. In a screenshot of Gigi’s comment that said that the late Virgil Abloh “loved” Gabriella Karefa-Johnson, Kanye captioned the post, “IM NOT FINNA GET RAN OVER BY HOLLYWOOD AGAIN GIGI YOU A PRIVILEGED KAREN YOU WERE BORN WITH A SILVER SPOON IN YOUR MOUTH YOURE A ZOMBIE YOU SPEAK UP HERE BUT DIDNT SPEAK UP WHEN MY CHILD WAS KIDNAPPED ON HER BIRTHDAY.” The latter half of the statement refers to when Kanye claimed that he was not invited to his and Kim Kardashian’s 4-year-old daughter Chicago’s birthday party in January. Kim’s family denied those claims. 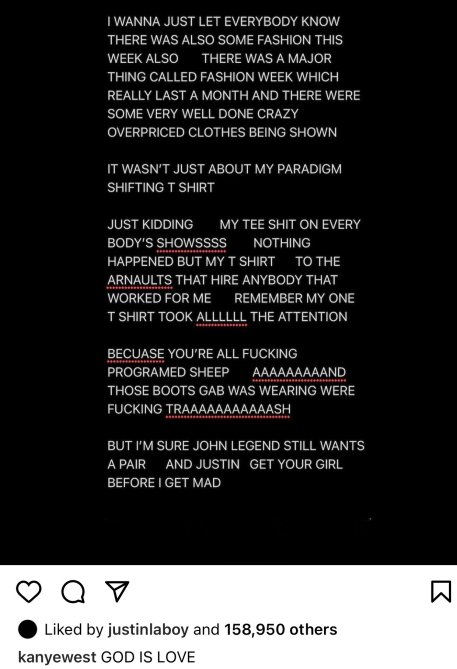 Hailey expressed her support for Gabriella when the news broke between her and Ye’s feud. “My respect for you runs deep my friend!” the model wrote to the fashion editor on her Instagram Stories. She added, “to know you is to adore you and to work with you is an honor. the most kind. the most talented. the most fun. the most chic.”

Ye responded. “Wait Am I canceled again???,” Kanye captioned an Instagram post of an E! article that reported Hailey’s support for her friend. “Justin [Bieber] please let me know.” In a later post, Kanye wrote, “REMEMBER MY ONE T SHIRT TOOK ALLLLLL THE ATTENTION [BECAUSE] YOU’RE ALL F**KING [PROGRAMMED] SHEEP,” Ye wrote in all caps. “AAAAAAAAAND THOSE BOOTS GAB WAS WEARING WERE F**KING TRAAAAAAAAAAASH BUT IM SURE JOHN LEGEND STILL WANTS A PAIR AND JUSTIN GET YOUR GIRL BEFORE I GET MAD.” John Legend ended his friendship with Kanye in 2016 when he backed Donald Trump for president. Ye also posted a screenshot of Drake liking his post dissing Gigi, Hailey and Justin. He captioned the screenshot of the like, “EVERYONE KNOWS ME AND DRAKE HAVE HAD A RIVALRY IN THE PAST IT REALLY WARMED MY HEART TO SEE DRAKE LIKE ONE OF MY POST WE STILL NEED THE DONDA TEAM TO PLAY NOCTA ALL DRAKE MUSIC WILL BE PLAYED AT DONDA GAMES MOVING FORWARD.

In more shade towards Hailey, on October 7, 2022, Kanye posted a screenshot of an Entertainment Tonight article published in 2016 with the headline “Getting Serious? Drake Wears ‘H’ Necklace After Date Night,” to which he captioned it with “Get your girl before i get mad. You [supposed] to be my friend right. You wasn’t there when the Kardashians kidnapped my kids.” Drake and Hailey were speculated to be dating during that time, but Hailey is currently married to Justin Bieber. 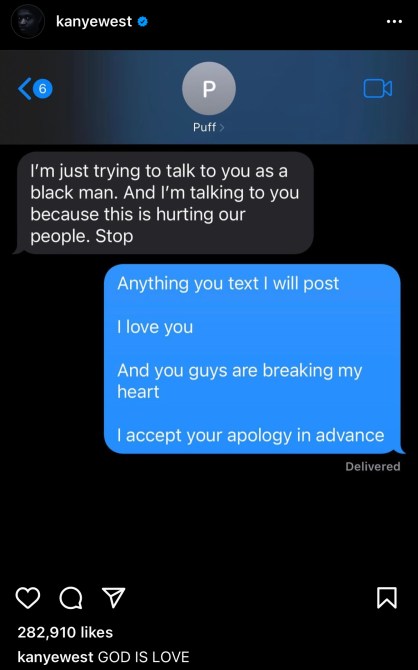 Kanye went on full blast with his feud with Sean “Diddy” Combs, too. On The Breakfast Club on October 5, 2022, Diddy told Charlamagne Tha God “My boy is a super, super, super free thinker and a lot of times, what he means is, like, misconstrued, you know what I’m saying?” Charlamagne replied, “You gotta stop making excuses for him.” Diddy replied, “No, no, I’m not making excuses, I’m just sayin’ if he did it, that’s the way he thinks.” He also went on to say that people “don’t have to condemn Kanye or cancel him” but he says that the shirts were “very tone-deaf.” “I understand white lives do matter, but it’s not that,” Diddy continued. “[Black Lives Matter] was our slogan. That wasn’t our slogan to go share with nobody else… Because right now, we’re the ones that are dying, that are incarcerated, that are left in poverty.”

Ye posted several screenshots of messages to Diddy that threatened the rapper on his Instagram on October 7, 2022. “I didn’t like our convo,” Kanye wrote. “I’m selling these tees. Nobody gets in between me and my money. This is my grandfather texting you now.” He continued, “Never call me with no bulls—t like that again unless you ready to green light me. Cause anybody who got on that tee is me. Out of respect for everything you’ve meant to me I’ll be quiet as Virgil. But now I know how I’ve hurt people I love with threats.” He continued with the next message, “Come do something illegal to me noooow pleeeeeeeeease.” He captioned the post, “God is Love My brother misspoke to me but I still love him.”

In another post, Kanye posted a screenshot of Diddy replying, “As soon as I land we’ll meet face to face!!! Send me a address.” Kanye then cursed Diddy out and called him a “fed,” and captioned the post “Jesus is King.”  In another screenshot, Diddy insisted, “send me a address. Let’s stop playing these internet games. And don’t feel threatened. You’ll be fine. Just love.” “This ain’t a game,’ Kanye responded. “Ima use you as an example to show the Jewish people that told you to call me that no one can threaten or influence me. I told you this was war. Now gone get you some business.’ Ye captioned that post with “Jesus is Jew.”

In a last set of messages, Kanye posted the screenshot of Diddy saying, “I’m just trying to talk to you as a black man. And I’m talking to you because this is hurting our people. Stop.” Kanye replied, “Anything you text I will post. I love you. And you guys are breaking my heart. I accept your apology in advance.” “You guys” refers to Diddy as well as his friend Boosie Badazz, who also criticized the “White Lives Matter” shirt. Kanye concluded his Instagram posts with a picture of text with a black background saying “IMA MAKE IT SO — WON’T FEEL LIKE TALKING TO ME ANYMORE.”

Kanye’s ex-wife Kim Kardashian also has something to say about his “White Lives Matter” shirts. A source told Hollywood Life how the KKW Beauty founder felt when she saw the picture on Instagram. “Kim is not surprised by Kanye decision to wear that on his shirt and thinks that he is, once again, trying to get attention,” the source dished. “She knows that he loves to start controversy and she is not even feeding into this. Sure, she thinks that he is making a horrible choice and that the message is very offensive to so many.” Kanye was a huge supporter of the Black Lives Matter movement in 2020. He not only marched in protests, but also donated $2 million to the families of George Floyd, Ahmaud Arbery, and Breonna Taylor. “Kim knows how much support Kanye gave to the Black Lives Matter movement,” the source added and said she was “utterly confused” by his choice to wear such a shirt.

The source continued that Kim was “utterly disgusted” after seeing this photo go viral when Candace Owens shared the picture of her posing with Kanye in the same “White Lives Matter” shirt on her Instagram. On her podcast Daily Wire, Candace called Kim and her mother Kris Jenner a “prostitute” and a “pimp” when Kim’s ex Ray J went on air with her to reveal that Kim and Kris were allegedly in on the sex tape. “When she saw Candace’s post with a photo collaborating with Kanye, Kim lost it,” the insider said and confirmed that Kanye was well aware of Candace’s insult. “Kanye knows that Candace just got done calling the mother of his children a prostitute and the grandmother of his children a pimp to the world, so she is extremely bothered by the fact that he would do anything with her and she finds it very disrespectful to her and her family,” the source revealed.