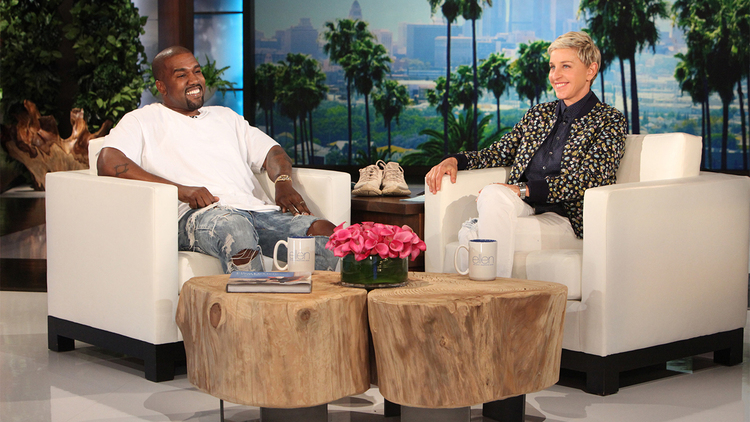 Kanye has no regrets. To regret is to think, and as he tells Ellen DeGeneres on her show today, “What’s the point in thinking?” This marks the beginning of what can only be described as a live-action Twitter rant, his Tom Cruise–Oprah moment, or a real-life version of the “30 Rock” episode “Tracy Does Conan.” Let’s just say if you took him off the “Ellen” set and put him on an L.A. street corner, this would be a very different story.

It all starts when Ellen asks if he regrets requesting $56 million from Mark Zuckerberg. And beyond filing that request on Twitter instead of Facebook, he doesn’t. “I feel if I had more resources, I could help more people,” he tells a speechless Ellen. “I have ideas that could make the human race within our 100 years of existence better. Period.”

He goes onto to say he would wipe bullying from the face of the earth if only he had political and financial backing.

“I’m sitting with Obama, and Leo’s talking about the environment. And then I start talking about clothes, and everyone looks at me like it’s not an important issue. But I remember going to school in like the fifth grade and wanting to have a cool outfit. I called the head of Payless and was like, ‘I want to work with you. I want to take all this information I’ve learned from sitting at all these fashion shows and knockin’ on all these doors and buying all these expensive clothes, and I want to take away bullying.’”

And this is all being said with crazy eyes. He’s not looking at Ellen, and though he’s looking out at the audience, he seems to be looking at something only he can see. Maybe it’s his future, his legacy, as he hinted at that, too. “Picasso is dead. Steve Jobs is dead. Walt Disney is dead,” he said. Name somebody living that you can name in the same breath as them.” We can’t, but we’re sure Kanye can.