So long, “Skete.” While Kanye West and Pete Davidson’s Instagram saga likely isn’t ending any time soon, one of them isn’t sticking around to entertain the madness any longer. Pete quit the social platform yet again—and this time, Ye is taking credit for driving him off the app.

After Pete deleted his Instagram, Kanye took to his own Instagram account to boast about the Saturday Night Live comedian’s exit from the platform. “Ran Skete off the gram,” the 44-year-old rapper wrote, referring to Pete. “Tell your mother I changed your name for life.” Kanye has been targeting Pete for weeks as the comedian continues to date Ye’s estranged wife, Kim Kardashian, who filed for divorce from the Grammy winner in February 2021.

The King of Staten Island star temporarily joined Instagram amid the drama, seemingly hitting back at Ye with a cryptic video shared to his Instagram bio. The clip, which included a scene from The King of Comedy, featured fictional character Rupert Pupkin (played by Robert DeNiro) saying his famous quote: “Better to be king for a night than schmuck for a lifetime.” Many fans interpreted the quote to be a subtle dig at Ye; of course, that only fueled the fire. When Pete shared his first post to Instagram the following day, Kanye’s supporters flooded the comments of his post to criticize him, often referring to him by the unflattering nickname Kanye coined, “Skete.” Within hours, Pete’s account was deactivated.

While Ye is claiming victory over Pete’s exit from Instagram, a source tells Page Six that “Kanye didn’t drive Pete off social media,” as the comedian had other reasons for leaving the app. “Pete deleted his IG because immediately after his first post, he started receiving a flood of messages, both positive and negative, reminding him why he didn’t want social media to begin with,” the source shared. “[Pete] is in the middle of several big film projects and wants to continue to stay very focused on his work and the positive things happening in his life.”

Still, that isn’t stopping Ye from dragging Pete frequently—especially as he continues to refer to him as “Skete” in a strange ploy to win back his ex, Kim. 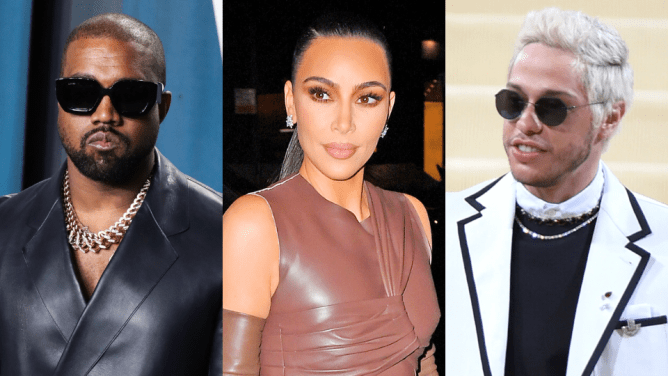 As Kanye and Pete’s beef continues to unfold on social media, there’s one question that followers of the drama can’t stop asking: Why does Kanye call Pete “Skete,” exactly? Truthfully, nobody knows why Ye chose this particular moniker; but guesses as to its origin are pretty unsavory. What’s clear, however, is that Kanye started using this nickname pretty early on when it came to dragging Pete into the mix on social media.

In one since-deleted post, the rapper referred to Pete as “Skete” before accusing him of trying to “destroy” his family. “Hold your spouse close,” Ye wrote in the post. “Make sure they know how much you love and appreciate them because [there’s] a Skete lurking in every dirty ass alley waiting to help destroy your family and walk around in Calvin Kleins around your children.” In another post, Ye called Pete a “d–khead” before alleging that he once dated politician Hilary Clinton. “LOOK AT THIS D–KHEAD,” Kanye captioned the post. “I WONDER IF INSTAGRAM GONNA SHUT DOWN MY PAGE FOR DISSING HILARY CLINTON’S EX BOYFRIEND.”

The rapper also shared alleged private messages from Kim, who was worried about her boyfriend’s safety following Ye’s attacks on Instagram. “U are creating a dangerous and scary environment and someone will hurt Pete and this will all be your fault,” one alleged message read.” Ye, for his part, responded by asking his fans not to harm “Skete” physically. “UPON MY WIFE’S REQUEST PLEASE NOBODY DO ANYTHING PHYSICAL TO SKETE IM GOING TO HANDLE THE SITUATION MYSELF,” he wrote at the time.