Certainly royalty? Kanye West just compared Kim Kardashian to Queen Elizabeth II. The DONDA artist took to his Instagram to post about how he relates to the population of London.

On September 25, 2022, Ye posted on his Instagram stories, “‘London I know how you feel. I lost my queen too.’ Queen Elizabeth died “peacefully” on September 8, 2022. Kanye’s “queen” most likely refers to his ex-wife Kim Kardashian who filed for divorce in 2021. Kanye posted the story in the middle of a story spam in between photos of his daughter North and his Vogue videos at Milan Fashion Week.

Kanye reunited with ex-girlfriend Irina Shayk after the Burberry show at Milan Fashion Week on the same day. The “Heartless” artist and model hugged when they reunited in a video captured by Vogue. After they hugged, Irina told Kanye, “I got you,” while he smiled. Irina walked the Burberry runway in a black strapless gown with a bow design on the back from Riccardo Tisci’s upcoming collection. In the video, Kanye also talks with fellow model Bella Hadid and musician Erykah Badu. Irina and Kanye were speculated to be together in the summer of 2021 after rumors they were seeing each other. 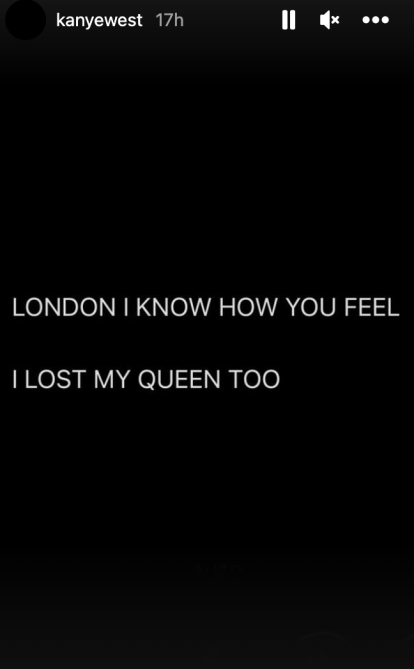 The posts come several weeks after Kanye dissed Kim and her family on his Instagram. All the posts have been wiped from his profile, but Kanye called out the Kardashians for the school choices of him and Kim’s kids: North, 8, Saint, 6, Chicago, 4, and Psalm, 3. Kanye argued that their kids should go to his new Donda Academy, but the person asked him to “stop.” Kanye replied, “No, we need to talk in person, you don’t have a say so of where the kids go to school. Why you get say say? Cause you half white?”

Kanye fired back, “Y’all don’t have so so over my black children and where they go to school. they will not do playboy and sex tapes” and he told the Kardashians to “tell your Clinton friends to come get me.” Ye made a separate post revealing his reasoning for his own antics. “Anybody that says I’m spiraling when I express the undeniable truths is a sheep,” he wrote telling people to “shut the f–k up and worry about you’re [sic] own kids.” He continued, “I obviously am dealing with wars at the highest levels of control and discrimination based on the level that I’m operating. Oh Ye is crazy is basic as f–k at this point. I’m simply right. I know girls who sell p—y that don’t agree with how my daughters are displayed.” He concluded the posts, ““It’s not up to Calabasas or Hulu where my kids go to school. I’m not the crazy one,” he said, adding, “I won’t stop until I have a say so on my kids no matter what it legally takes.”