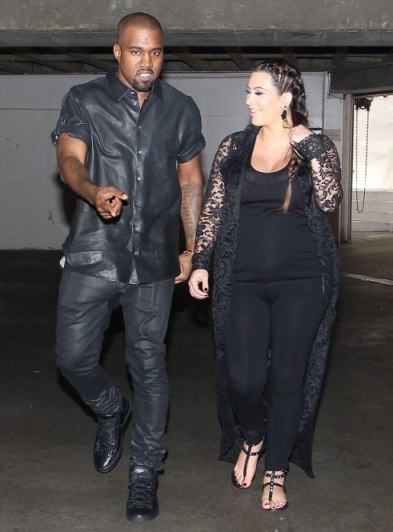 Obviously, one of the hottest topics in the celebrity news world right now is how Kim Kardashian and Kanye West will debut their baby girl North West to the world. Since giving birth to North in June, Kim has stayed out of the public eye—making a rare appearance (sort of) through a video on her mother Kris Jenner‘s talk show. There have been repeated reports that state that the couple will not be selling pictures of the baby to a tabloid—something many expected them to do.

So, they have a couple of options: Either they’ll release home photos on their own, like Beyoncé and Jay-Z, or they will seek a cover of a major glossy, like Katie Holmes and Tom Cruise, who introduced daughter Suri to the world in an Annie Leibovitz-shot Vanity Fair spread.

Now, it’s being suggested that Yeezy is a fan of the latter option, and is hard at work convincing fashion’s grand dame Anna Wintour to let them showcase North on the cover of Vogue.

According to RadarOnline,  “Kanye is determined to make sure baby North isn’t photographed by paparazzi then splashed across the world. He knows what he wants—a professional photographer and the cover of Vogue—nothing else. But clearly, trying to persuade Anna is going to be an uphill battle.”

Obviously, we can’t imagine Anna going for this idea—although she did reportedly approve of the name North West, and Vogue.com did run a bizarre article in defense of it as well. But to convince her otherwise, Kanye allegedly pulled up a series of statistics, all showing that Kim’s face (and, let’s face it, body) on the cover can seriously move magazines—such as Cosmopolitan, whose bestselling issue of the year featured her on the cover. Since Kim has already appeared on the cover of high-profile fashion glossies like W and L’Uomo Vogue, Kanye thinks it’s a sure thing—and has supposedly reached out to Leibovitz and Vogue favorite Mario Testino.

“Kanye is convinced that he’s going to make this happen,” the source noted.

Well, only time will tell—but this would be a seriously big coup for Kim, and would make her full-on transition to the fashion world. But frankly, we’re not buying it as of yet.

What do you think? Is there any way this would possibly happen? Let us know your thoughts below!