Revealing too much? Kanye West called out the Kardashians in his latest Instagram rampage. The DONDA rapper took to the social media platform to diss his ex-wife’s family and to plea with them to take his children to his Donda Academy.

“Don’t let Kris make you do playboy like she made [Kylie] and Kim do,” Kanye revealed in a now-deleted post directed toto Victoria Villarroel, Kylie Jenner’s former assistant. Kim and Kylie both posed for the magazine in 2007 and 2019, and seemed to put Momager Kris Jenner on full blast. He then went on to say that, “Hollywood is a giant brothel Pornography destroyed my family I deal with the addiction instagram promotes it Not gonna let it happen to Northy and Chicago.”

In his latest Instagram post marathon, the “Heartless” producer first dissed Hillary Clinton and Mark Zuckerberg since he claimed that they were “gonna take me off Instagram.” Ye then posted multiple screenshots of a conversation presumably with Kim about their kids: North, 8, Saint, 6, Chicago, 4, and Psalm, 3. Kanye argued that their kids should go to his new Donda Academy, but the person asked him to “stop.” Kanye replied, “No, we need to talk in person, you don’t have a say so of where the kids go to school. Why you get say say? Cause you half white?” The conversation continued and the person relayed a message from Kris where she said, “Tell him to please stop mentioning my name.“I’m almost 67 years old and I don’t always feel great and this stresses me to no end.” 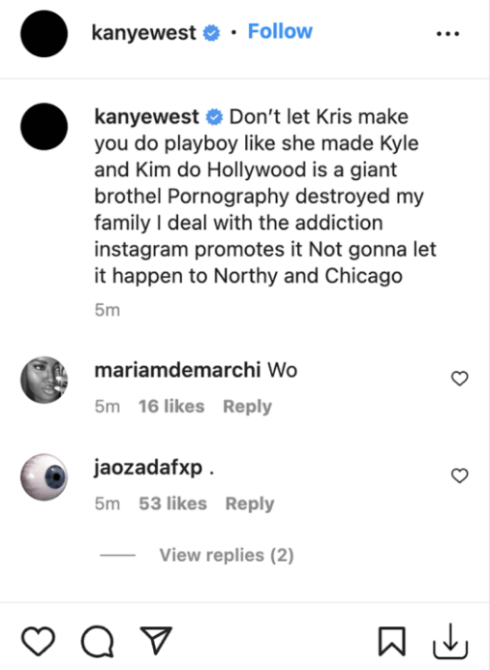 Kanye fired back, “Y’all don’t have so so over my black children and where they go to school. they will not do playboy and sex tapes” and he told the Kardashians to “tell your Clinton friends to come get me.” Ye made a separate post revealing his reasoning for his own antics. “Anybody that says I’m spiraling when I express the undeniable truths is a sheep,” he wrote telling people to “shut the f–k up and worry about you’re [sic] own kids.” He continued, “I obviously am dealing with wars at the highest levels of control and discrimination based on the level that I’m operating. Oh Ye is crazy is basic as f–k at this point. I’m simply right. I know girls who sell p—y that don’t agree with how my daughters are displayed.” He concluded the posts, ““It’s not up to Calabasas or Hulu where my kids go to school. I’m not the crazy one,” he said, adding, “I won’t stop until I have a say so on my kids no matter what it legally takes.” He also posted a screenshot with the names: “Travis, Tristan and Scott” referring to Travis Scott, Tristan Thompson and Scott Disick who all have children with the Kardashians. He posted it with the caption, “Calling my fellow c** doners. We in this 2gthr.”

Kim filed for divorce from Kanye in February 2021 after six years of marriage. A source previously told E! News on August 5, 2022, that they “are in a really great place.” Kim ended up being on a Yeezy brand campaign with her kids, which led some fans to believe that they were going to be on better terms.  “Kim was happy to be asked to be a part of the campaign with the kids and to support Kanye in this way,” a source told E! News. “But it’s not a sign of them getting back together.” While Kanye and Kim are not getting back together, the insider added that the two “are fully aligned in making their kids their priority.”

Kanye made the rounds on his Instagram back in February 2022 attacking Kim’s then-boyfriend Pete Davidson. After news broke that Kim and Pete broke up, Kanye took to his Instagram on August 8, 2022, with a photo of a fake New York Times cover with the headline: “Skete Davidson Is Dead at Age 28.” “Skete” is Kanye’s derogatory nickname for Pete. An insider told Page Six on August 8, 2022, that Kim is mad at her ex-husband for posting the “Skete” post and that he was back to his “old ways.” “Kim is livid and incredibly upset. Kanye is back to his old ways and Kim will not tolerate his bullying behavior towards the people she loves and cares about,” the insider said. “Kim and Kanye have been in such a positive co-parenting space and with communication lately. Kim even was happy to support Kanye and do the Yeezy shoot and post for his This is just a reminder to her that he will never change and why there will never be a chance of reconciliation.”