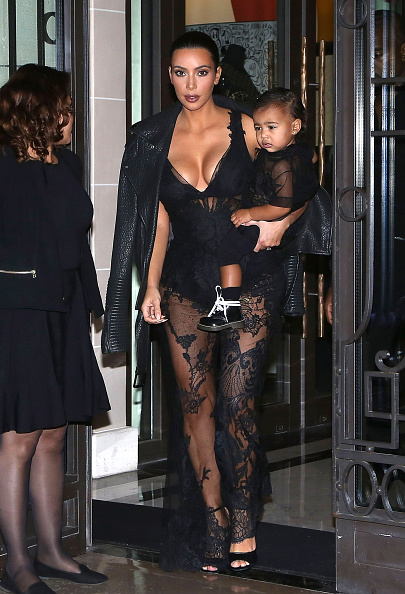 Well, what did you expect Kanye West to get Kim Kardashian for her birthday?  Season two of “Homeland?” A Pandora bracelet? A copy of “The Goldfinch”?

In true Yeezy form, instead of giving his wife something ordinary, the rapper presented her with yet another custom Hermès Birkin bag, but this time he commissioned their 16-month-old daughter North West to draw all over it.

“Kanye had a box [with an Hermes purse in it] and I opened it up and it was all painted really cool and on my computer was this message that said ‘Play’ and it was a video of my daughter sitting outside painting the purse,” Kardashian told Us Weekly. “I had thought it was this new artist who had painted this purse [but] it was my daughter. It was amazing.”

This isn’t the first arted-up Birkin that Kim owns: Last Christmas Kanye memorably presented his then-girlfriend with a version of the luxe bag—which start at around $10,000—covered in painted nudes by visual artist George Condo, whose work you might recognize from the cover of Kanye’s 2010 opus My Beautiful Dark Twisted Fantasy.

The Birkin wasn’t the end of Kim’s birthday surprises, though. Apparently Kanye also treated the 34-year-old to a Hawaiian getaway where they—gasp!—shopped at the Gap.

“Kanye took me away for 24 hours and was like, ‘What do I get the girl that has so much?’ Sleep and no paparazzi and shopping at The Gap,” Kardashian told Us Weekly. “We spent two hours shopping at The Gap and we haven’t been there in years. We bought cream sweaters—we bought like five of them and we’re going to reconstruct them and make things out of them,” she told Us, adding that they also picked up pajamas, robes, sweats and a jean shirt.

There you have it, folks. A shopping spree at the Gap and a defaced Birkin is all “the girl who has so much” needs. Now, all we need is to see what KimYe reconstructed out of the five cream-colored Gap sweaters.