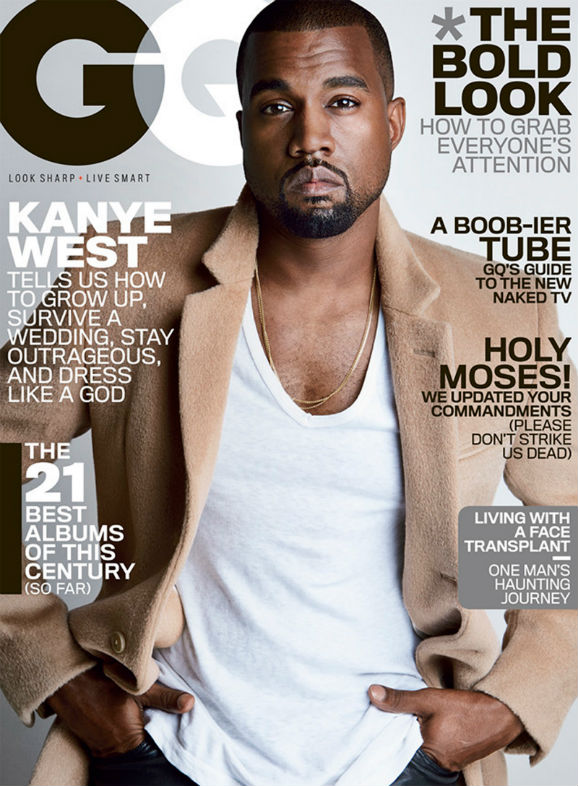 Kanye West always says some outrageous stuff when he’s interviewed. In the past, he’s taken aim at Steven Spielberg, compared himself to Steve Jobs, and accused Saint Laurent of plagiarism. And that’s really just scratching the surface. In a just released GQ magazine cover story, meant to show off his softer side now that he is married and a father, West stays true to form, talking about everything from how he’s responsible for 50 percent of Balenciaga’s men’s shoe sales to why he’s the ultimate arbiter of taste.

MORE: Brad Pitt and Angelina Jolie Are Reuniting on the Big Screen

Yes, West’s ego seems to alive and well and we wouldn’t want it any other way. Here, 8 things we learned about the rapper turned sometimes designer turned Kardashian husband from the interview.

1. He thinks Drake is dominating rap: “Yeah. He got last summer. And I’d never given it up till last summer.”

3. He wasn’t that much of a diva about his wedding: “The bathrooms—that usually would be a porta-potty—were wrapped in a fabric that was neutral to match the fort. The bar was terrible, and the wedding planner didn’t approve it with me. I was having issues with this wedding planner the entire time on approvals, and I get there and they threw some weird plastic bar there. So the same materials that were used to cover the bathroom, we said, ‘Let’s just use that, because this is all we have to make the bar look better.’ Which it did, in the end.”

4. His speech at his wedding was about the state of celebrity now: “What I talked about in it was the idea of celebrity, and celebrities being treated like blacks were in the ’60s, having no rights, and the fact that people can slander your name. I said that in the toast.”

5. Carine Roitfeld and Kim are breaking class barriers by being friends: “Carine Roitfeld was sitting next to Kim Kardashian. That alone to me is like the same moment when I brought Mos Def to the studio with Jay Z. It’s about the people, and the fact that they’re from different walks of life, and that they’re working together and not discriminating against each other. There was a class system, and now there’s a creative class system, and I think that’s what you were talking about a bit—the class system of creativity.”

6. He fell for Kim for multiple reasons: “You mean to tell me that this girl with this fucking body and this face is also into style, and she’s a nice person, and she has her own money and is family-oriented? That’s just as cool as a fucking fighter jet or dinosaur! And just as rarely seen.”

8. Don’t ever forget it, everything West does is innovative: “I am an arbiter of taste, and people think that I have the ability to make things cool—or if I’m doing it, it should be cool. And I feel that this stuff’s starting to be cool. And that feels good to me. Because I don’t like walking around with people thinking I’m doing uncool shit, because there’s nothing I’m doing that’s uncool. It’s all innovative.”