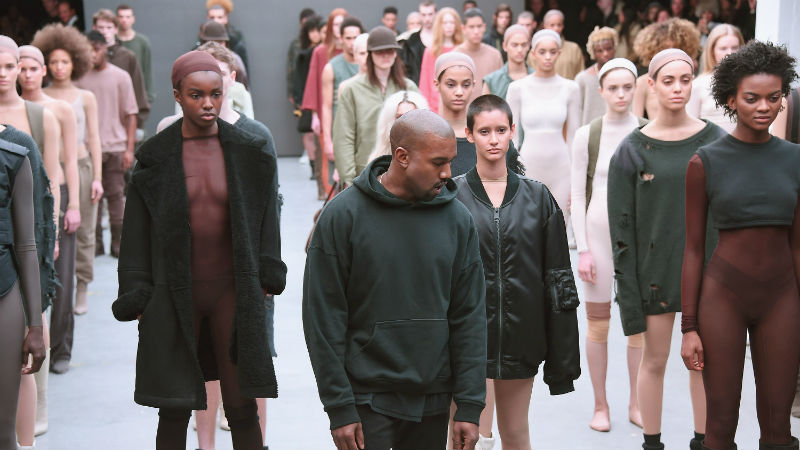 You have to give it to Kanye West, the guy doesn’t give up on his dreams. Despite winning countless Grammys, selling over 21 million albums, and marrying a Kardashian, West really, really wants to make it as a fashion designer, no matter how many times he has to try.

A brief history lesson on West’s attempt at having a fashion line: He collaborated with Nike on various pairs of sneakers from  2006 to 2014, and on a few pairs of sneakers with Louis Vuitton (all wildly successful). Then there were two cringeworthy attempts at a high fashion line called DW Kanye West at Paris Fashion Week. Eric Wilson wrote in The New York Times: “What Mr. West showed was confusing.” Not exactly an encouraging endorsement.

Now comes his latest attempt: a line for Adidas, that kicks off with the debut of his Yeezy 750 Boost sneaker (on sale on Saturday for $350) and with a ful collection of clothes for men and women that debuted at a New York Fashion Week show dubbed “Kanye West and Adidas Originals Kanye Season 1″—the not-so-subtle takeaway being he plans to have a Season two, and three, and so on.

Along with the live fashion show, the event was also livestreamed at 42 movie theaters around the globe, with tickets being dispersed to fans on a first come, first serve basis.

No New York Fashion Week show has been as hyped as this, and invitations to it went out a mere day before, and came in the form of vacuum packed bags that included a windbreaker with “Yeezy” emblazoned on the sleeve. They’re already on eBay, by the way, selling for between $180 to $500.

By the time we showed up at the debut, held at a downtown New York City event space, we half expected to see most of the crowd in said windbreaker. That was a no go, probably because it is absolutely freezing in New York at the moment (hovering in the high 20s) and the uniform veered towards puffy coats and Timberland boots instead.

By the 4 p.m. start time, there was a line down the block of people waiting to get in. It didn’t take long for the crowd got antsy (hey, no one likes to stand in the cold!). Overheard rants included everything from: “I think Kanye West is trying to freeze us to death” to a publicist manning the event who said “I want to stab myself in the eye.” Rumors began circulating that the delay on the start time was because rehearsals were still happening.

About 25 minutes after the show was about to start, the doors opened up to reveal a dimly lit room, with no sound, and ten rows of models (a row of women, then a row of men), with the staging taking its cues from performance artist Vanessa Beecroft who was credited on the invitation.

Models ran the gamut from short, tall, sample size, not sample-size, and ranged in ethnicity. While it wasn’t immediately obvious, we eventually noticed that Kylie Jenner was one of the models in the formation (wearing a bodystocking and—shocker—minimalist makeup).

The clothes, meanwhile, included a mix of army jumpers and camouflage parkas for the guys to full on bodystalkings for women, paired with high heels. A standout in the collection was a utilitarian backpack (trust us, everyone’s going to want this). Love them or hate them, these clothes absolutely looked like they came from Kanye’s head. 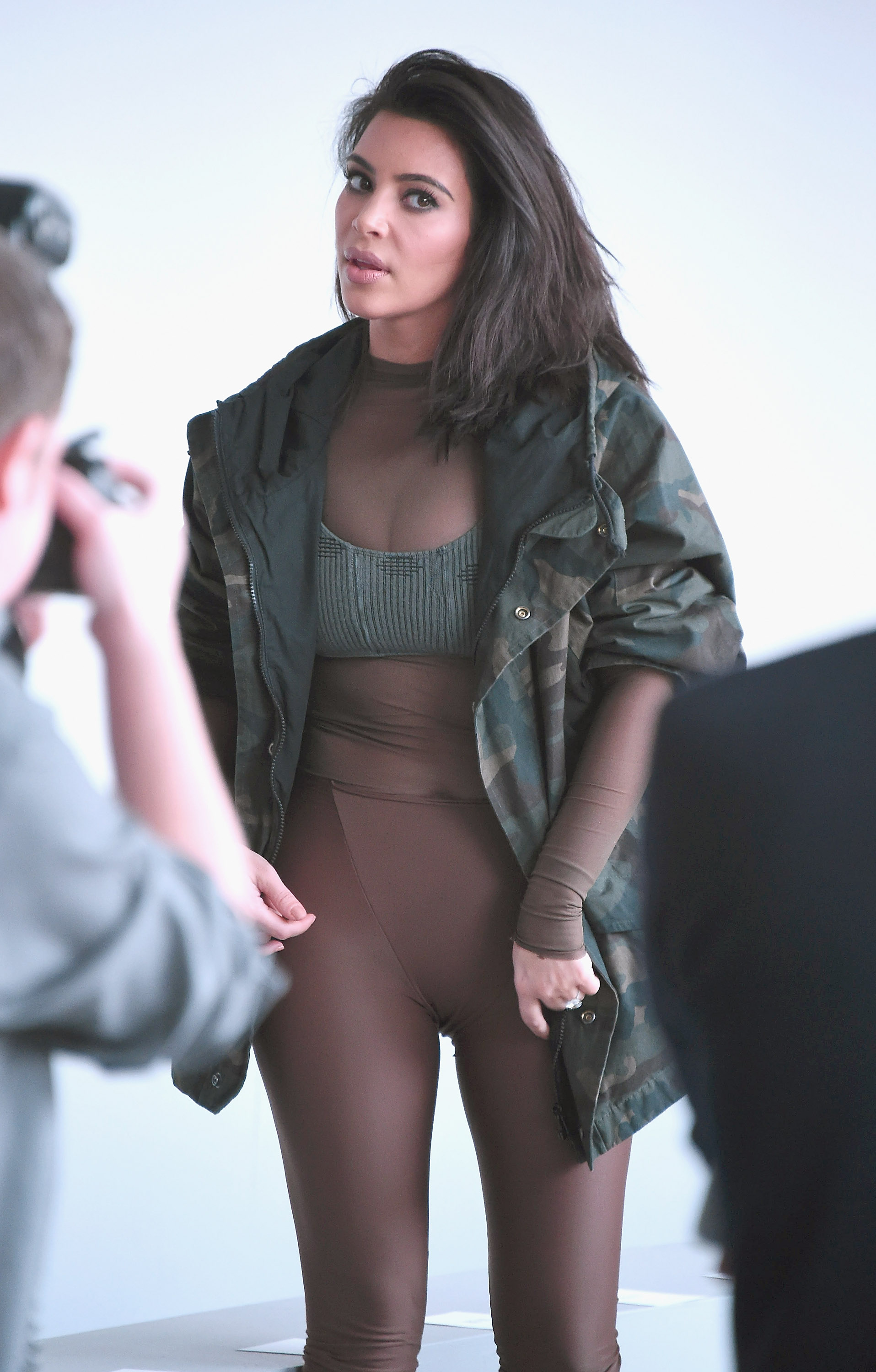 As for the front row? It included the likes of Jay-Z, Beyoncé, Vogue editor Anna Wintour, Kim Kardashian (wearing a bodystocking from the collection and a camoflauge jacket), Kendall Jenner, Kris Jenner, Rihanna, Alexander Wang, and P.Diddy.

In the second row we spotted Pete Wentz, Justin Bieber, and Kardashian BFF Jonathan Cheben. Rapper Travi$ Scott (in a pink shearling, mind you) was relegated to the third row.

Eventually, still in semidarkness, the show started with a monologue from West:

I see all these people commenting, ‘Why’s he still trying?’ I mean, if I see something , I see an opportunity, I’m gonna go for it. I’m here to crack the pavement and make new grounds, sonically, and society, culturally. We’re not always in the position we want to be at, where we’re constantly growing, constantly making mistakes, we’re constantly trying to express ourselves and trying to actualize our dreams. I want to create something better for you. We have been limited.  It’s bigger than who I am even in this—my presence, living. It’s about, you know, when I was on earth, what did I do to help? I want people to think more, I want people to feel like it’s OK to create and follow what their dreams are and not feel boxed in. I want people to feel like awesome is possible. There’s a lack of creativity in every field, because people are afraid. As an artist, and in this world, we can do whatever we want.

Then a mix of ethereal voices and a synthesizer started playing, and the models began to move forwards, some walking along the perimeter of the room.

At one point North West, on Kardashian’s lap and holding a juice box, started to hysterically sob, and Kardashian had to go deposit her backstage.

And that point, about halfway through the presentation, the lights came on, while a new West song that hasn’t debuted yet called “Wolves” started to play (it reminded us a bit of his “Heartless” track). While the West fan club began thumping their heads (Jay-Z, Beyonce, Cheben) Wintour looked around nervously.

At the end of the track, West came out and took what is maybe the longest bow we’ve seen a designer take, walking in between the models, and placing his hand on his heart.

And with that, the buzziest show of this Fashion Week came to a close, with the relatively small audience filing out back into the cold, or, in the case of the A-listers in attendance, the army of SUVs parked outside waiting for them.

Final thoughts: We have to give it to West—this show, and all of the hoopla around it, really is about selling his sneakers. Wall-to-wall social media coverage and endorsements from the likes of Rihanna and Jay-Z? We have a hard time imagining these things not selling out. The clothes weren’t revolutionary, but they don’t need to be.

Second, we have to give him props for featuring a diverse range of models. This is still a huge issue during Fashion Week, and if anyone can move the dial a bit on this, it’s Yeezy.

Lastly, the move on the part of West and Adidas to livestream the show? Brilliant. Yes, it’s cool to stage a fashion show for insiders, but brands are wise to do something fun for their core fans, too.

So hats off Kanye, and we’ll see you next season (just leave North at home this time).