Charismatic nomad Caleb McGillvary, a “home-free” traveler who called himself Kai, became an internet sensation in 2013 when a local news team interviewed him as an eyewitness to a car crash. Months later, he was arrested for murder. So where is Kai the Hitchhiker now?

His wild story and fall from grace as a viral star to a violent criminal is the basis for the Netflix documentary The Hatchet Wielding Hitchhiker, which dropped on the streaming service on January 10, 2023. On February 2, 2013, a video of Kai was broadcast on Fox affiliate KMPH in Fresno, California. According to his eyewitness account, he had been hitchhiking and was picked up by Jett McBride. The driver crashed into a pedestrian, pinning him between McBride’s car and a parked truck.

Kai jumped out to help; McBride attacked a bystander and, sensing she might be in danger, Kai took a hatchet from his backpack and repeatedly hits McBride with it in the back of the head. He was a hero. But just months later, Kai was arrested for the murder of someone else. Here’s the story of a “happy-go-lucky nomad’s ascent to viral stardom and the steep downward spiral that resulted in his imprisonment,” per Netflix.

Where is Kai the Hitchhiker now?

For the murder of New Jersey attorney Joseph Galfy, Kai the Hitchhiker is imprisoned at Union County Jail in Elizabeth, New Jersey, listed as inmate number 210329. It’s quite a fall from grace from once being a darling of the internet, even though his fame only lasted five minutes. Kai, whose real name is Caleb McGillvary, went viral after recounting an incident to a local TV news crew. 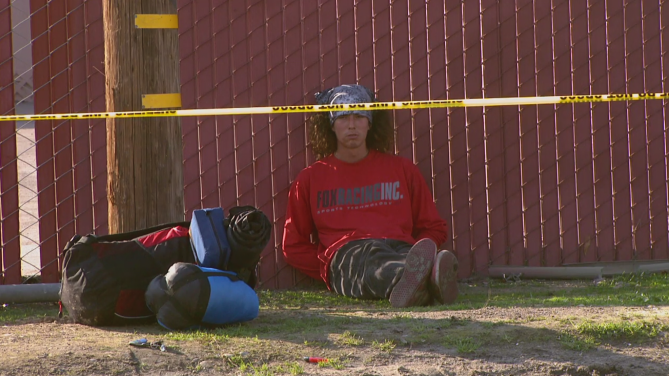 A man he’d caught a ride with suddenly went berserk, intentionally driving into a utility worker and pinning him between two cars. McBride was said to have told Kai that “he was Jesus Christ” and “could do whatever” he wanted. Kai got out of the car to help the pedestrian, but McBride then attacked someone else offering to help. “A guy that big can snap a woman’s neck like a pencil stick,” Kai told a local Fox News affiliate. “So I f–king ran up behind him with a hatchet. Smash, smash, SUH-MASH!”

“I was blown away, absolutely blown away,” cameraman Terry Woods told the Netflix documentary. “Because you looked at him, little rough around the edges and then you see the treasure he truly was.” Jessob Reisbeck, the FOX reporter, recalled that “the first thing he wanted to do was send a loving message to whoever sees this interview. And it’s powerful, it gives me goosebumps.” Indeed, Kai told the news crew: “No matter what you done you deserve respect. Even if you’ve made mistakes, you’re lovable. And it doesn’t matter your looks, skill, age or size, you’re worthwhile. No one can ever take that away from you.”

Hailed a hero nationwide, Kai’s dynamic retelling of the incident even landed an appearance on Jimmy Kimmel Live and interviews with VICE. Merely months later though, Kai was arrested for beating a 73-year-old lawyer to death in New Jersey. Kai had apparently met Galfy in New York’s Times Square after spending the night prior sleeping in the Port Authority bus terminal.

The attorney allegedly offered Kai a ride and a place to stay at his home in Clark, New Jersey. Kai was given a few beers and hamburgers, which he told New Jersey police after his arrest that he believed they had been drugged, saying: “He had made some burgers, then I don’t remember much after that. I woke up on his floor, he was trying to take my pants down and I started hitting him. I just blacked out.”

Kai maintained it was an act of self-defense. “I was under the influence of god knows what and there is, for all intents and purposes, a naked man over the top of me sexually assaulting me,” he said in an interview with Vocativ from 2016. “I fought tooth and nail. On the street, like, don’t get me wrong, I’m a nice guy and stuff. But if you’re sleeping underneath a train bridge and you wake up in a situation like that, you gotta fight for your life. It’s just a fact for survival on the streets.” 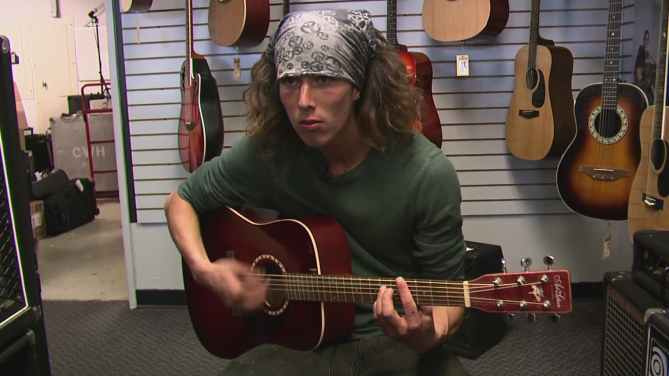 A friend asked the police to check in on Galfy after his newspapers started to build up in his driveway, which was out of character for the lawyer as he always collected his paper at the beginning of each day. This is how his body was discovered. Investigators used surveillance footage and phone data, among others pieces of evidence, to identify Kai as a suspect and he was arrested in Philadelphia a few days later.

Prosecutors didn’t buy his claim of self-defense, saying Kai’s statements were inconsistent and cited the victim’s extensive injuries—including “numerous serious blunt-force injuries to his face, head, neck, chest, and arms, including three skull fractures, four broken ribs, and severe contusions, abrasions, and bleeding,” as reported by CBS New York at the time. They also said the cutting of his long hair indicated his guilt and that he was trying to change his appearance to avoid capture. Prosecutors also told the jury that a list of sex offenders was found in Kai’s bag and suggested that he was seeking “vigilante justice”—a point rehashed in the Netflix documentary.

It took the case six years to get to trial but only four weeks to convict Kai after he appeared in court. He was found guilty and sentenced to 57 years behind bars. Union County Superior Court Judge Robert Kirsch said to him at the time of sentencing: “You are crafty, you are cunning, you are disingenuous, and you are manipulative,” Kirsch told Kai, describing numerous ways in which the convicted attempted to cover his tracks. “And when you become eligible for parole, you will still be younger than Mr. Galfy was when you murdered him.” 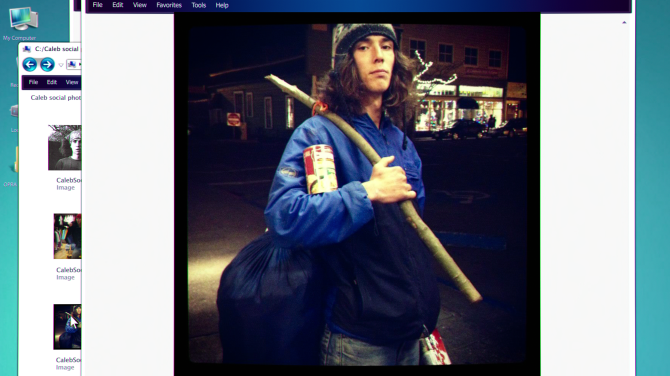 Kai must serve at least 85 percent of the term before the possibility of parole, under the terms of his sentence. “Do I feel bad that he’s dead? It’s a human life, [so] I mean yeah,” Kai said during the piece with Vocativ. “Do I feel bad that he raped me? I feel embarrassed like I think it’s disgusting. I feel all sorts of emotions and stuff that I wouldn’t wish on anyone else.”

In August 2021, Kai bid to have his murder conviction overturned, citing the jury was justified by the evidence and that prosecutors “committed misconduct by mischaracterizing the evidence” and Kai’s defense, per the Associated Press. He also accused the trial judge of improperly allowing highly prejudicial expert testimony.

The appeals court noted that the medical examiner’s testimony showed Galfy’s injuries were so severe that they were the result of “far more than just an effort to thwart a sexual advance,” in the opinion of the trial judge. “The record does not suggest a miscarriage of justice occurred,” the two-judge panel wrote.

The Hatchet Wielding Hitchhiker is available to stream on Netflix.