The Kardashian-Jenners are embroiled in feuds with many celebrities: Taylor Swift, Sofia Richie, Blac Chyna, to name a few. But we never expected bad blood to brew between Kendall Jenner and country singer Kacey Musgraves.

Confused? Let us break down the drama. On Thursday, Jenner, like the self-aware extra person she is, posted an Instagram of her lounging outside in lingerie in honor of New York’s scorching 90-degree weather. The picture featured the model perched on a chair sipping a cup of tea with rollers in her hair. It looked no different than any of her Instagram thirst traps—until you notice the blurred-out image in the back.

Turns out, the blurred image happened to be a poster for Musgrave’s new album, Golden Hour. Now, why Jenner blurred Musgrave’s face? We don’t know. But what we do know is that people—including Musgraves—definitely noticed the uncalled-for shade. Shortly after Jenner posted the picture, Musgraves took to her own Instagram to clap back at the model.

The country singer shared three photos on her Instagram story. The first was a screenshot of Jenner’s Instagram. The next was a close-up of her blurred-out face in the background. The last was another screenshot of Jenner’s Instagram. However, instead of leaving Jenner’s face clear and crisp, while hers is fuzzy, Musgraves also blurred Jenner’s face, giving her a taste of her own medicine. The clap back was eventually deleted from Musgrave’s Instagram, but that didn’t stop dozens of fans from screenshotting it and praising her for her diss. 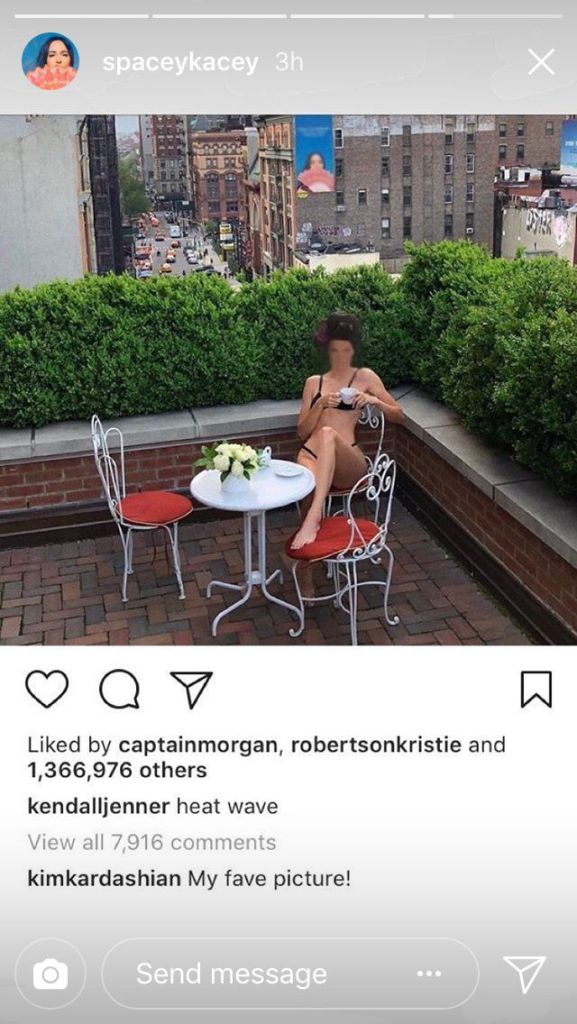 But before you get too excited that there’s another celebrity in the Kardashian-Jenners’ long list of enemies, Jenner took to her Twitter on Friday morning, a day after she posted the picture, to shut down any talk that there was a feud between her and Musgraves. In fact, Jenner is actually a huge fan of the singer, shouting out a few of her songs as “bangers.” Musgraves also still followers Jenner on social media, so it looks like the two are A-OK.

“yoooo, i was working all day and didn’t edit this photo! Kacey is literally my fuckin fav! Space cowboy, I Miss You, Keep it to yourself, FOLLOW YOUR ARROW!! bangers!! ask anyone of my homies i die for her! 🌹❤,” Jenner tweeted.

Though Jenner denied that she blurred Musgraves face, she did suggest that someone was responsible for editing the Instagram. Either Jenner has a Musgraves hater on her team or her iPhone camera as a very well-placed smudge.