Justine Marjan was driving to brunch in Los Angeles the first time she was asked to do Kim Kardashian’s hair. She was on the road to Studio City, 20 miles away from Kardashian’s Calabasas home, when she received a text from her boss, Kardashian-favorite hairstylist Jen Atkin, who told her that she was unable to make her appointment with Kardashian later that day and was wondering if Marjan could take her spot. “She was like, ‘Can you be there in 30 minutes?’ And I was like, ‘Yeah! I can do it!’ And I just turned around my car and drove there,” Marjan tells StyleCaster.

The gig wasn’t for a big event. It was for a simple dinner where Kardashian was trying out a new hairstyle: a bubble ponytail reminiscent of Princess Leia from Star Wars, which has become one of Marjan’s signatures. But the experience changed Marjan’s career and life forever. Soon after, Marjan started doing hair for other stars, like Olivia Culpo and Jenna Dewan, before her big breakout in 2015 when she started styling Kardashian’s hair in two Dutch-like braids, right after the reality star’s birth to her second child Saint West, and the look went viral. “She ended up wearing her hair like that for months,” Marjan says. “It became a big trend, and that was my big breakout where everyone was wearing braids.”

But Marjan’s career isn’t as simple as a couple of braids. It took a long time (including being fired at her first salon job and braiding strangers’ hair at the beach for $20) for her to get to where she is today. Raised in Carpinteria, California, a small beach town outside of Santa Barbara, Marjan always had an interest in beauty and fashion but never considered it a career. The eldest child of an accountant and a computer programmer, Marjan would spend her childhood drawing outfits and studying Kevin Aucoin makeup books with her friends. Her family didn’t have a lot of money, but that didn’t stop Marjan from feeding her interests. To stock her closet and beauty collection, Marjan would sew clothes from items at the thrift store and convince her family to travel to discount stores—sometimes in other states—so she could buy out-of-season makeup and clothes at a fraction of the price. “I remember I got my first Juicy jumpsuit, and I thought, ‘This is the coolest thing in the world,’” Marjan says.

Someone else’s success doesn’t dampen your own.

Her interest in hair started at 12 years old when her beauty-uninterested mom asked her to do her younger sisters’ hair for a cheerleading competition. It didn’t take much for Marjan to fall in love with it, and soon after, she found herself waking up at the crack of dawn to travel to a local hair salon owned by another cheer mom to do hair with the rest of the parents. Word of mouth spread, and Marjan soon became her school’s go-to hairstylist, styling her friends’ hair before dances and braiding her classmates hair on the schoolbus. She also made a side gig out of braiding strangers’ hair for $20 on weekends. “Someone would see me braiding, and they’d be like, ‘Oh. Can you do that for me?’ And I’d be like, ‘Sure.’ It kind of became this little business when I was really young,” Marjan says.

When she was a junior in high school, Marjan slept in and missed the last chance to take her SATs. Gutted, she enrolled in her town’s community college, unsure of what she wanted to do next. One day, while waiting for the bus to go to her college class, Marjan saw a hair salon across the street. Though she was a natural at hair, she never considered a career in it. But something motivated her to miss her bus and walked in.. “I asked if I could speak to the manager and if they would allow me to shadow or volunteer,” Marjan says. She was hired as a receptionist. But Marjan’s love for salon life wasn’t immediate.

Soon after starting there, she was fired for showing up late and being unprofessional. “I was 17 and going through a rough time in my life where I didn’t really know what I wanted to do, so I wasn’t fully invested in what I was doing there,” Marjan says. Turns out, the answer was right in front of her. “When I got fired, it put my life into check, and I was like, ‘Wait. What am I doing? What do I want to do?’” Marjan says. She wrote a list of how she planned to take back control of her life, which included eating healthier and meditating more often. She showed the list to her former boss and was rehired within a week. She started attending cosmetology school in the day, while working at the salon at night and on weekends. From a receptionist, Marjan worked her way up to a hair assistant before becoming a hairstylist on the floor herself. “I kind of feel like I fell into it,” Marjan says.

After eight years at the salon, Marjan craved for something more. “I realized I basically reached my full potential there,” Marjan says. She was at a crossroads: She could either start her own salon in her town or move to Los Angeles to advance her career as a hairstylist. She chose the former, taking business classes, finding a space and raising money. Just as the salon was about to open, plans fell through. “I was like, ‘This is a sign. I need to move to a bigger city,’” Marjan says. After weeks of driving four hours and back to L.A. to drop off résumés, Marjan reached out to Jen Atkin, who posted a social media call for a new assistant. Six weeks later, Atkin asked her to do a trial run. She cancelled her clients at the salon and drove to L.A. the next day, only to find out that Atkin was sick and couldn’t talk to Marjan as they did hair. “I was like, ‘Great. How am I supposed to make an impression when I’m trying to be invisible and not talk to her the whole day?’” Marjan says.

After weeks of not hearing back, Marjan was eventually hired as a part-time hair assistant for celebrity hairstylist, Kristin Ess. She worked with Ess for a few weeks before Atkin reached out to her, letting her know that the assistant she did hire didn’t work out and was wondering if Marjan was still available. She worked for both Ess and Atkin for some time before Atkin asked her to become the editorial director of her hair site, Mane Addicts, while also assisting. Marjan took the job and went on to work for Atkin full-time. A couple years in, Atkin was starting her hair-care brand, OUAI, and needed someone she could trust to take on the high-profile clients she was too busy for. “By that point, her clients knew and trusted me because I had been by her side for years. So Jen would refer me when she wasn’t available,” Marjan says.

Marjan’s first celebrity client was Kelly Rowland, who, along wiht Atkin, gave her invaluable advice on how to work with natural hair, an education Marjan believes to be severely lacking in the hair industry and cosmetology schools, which she thinks is more focused on the information necessary to pass one’s license exam than real-life skills, like how to work with different hair textures. “I’m so grateful that someone like Kelly Rowland was my first client. She would give me tips and help me out too, because she knew where I was coming from,” Marjan says.

It’s not as glamorous as it seems. It’s a lot of grit and hard work.

After Rowland, Marjan was referred to Kim Kardashian and her career took off from there. Through word of mouth, Marjan was able to build her own Rolodex of celebrity clients, quit her job as an assistant and start working as a freelance hairstylist full-time. Since then, Marjan has went on to work with stars, like Ashley Graham, Dove Cameron and most of the Kardashian-Jenner sisters. She’s also done hair for the covers of magazines like Billboard, GQ Germany and Harper’s Bazaar Vietnam. In 2018, she launched her first hair accessories line with Kitsch. “It was the first time I saw my name on packaging or anything like that, so that was a really exciting moment for me,” Marjan says. 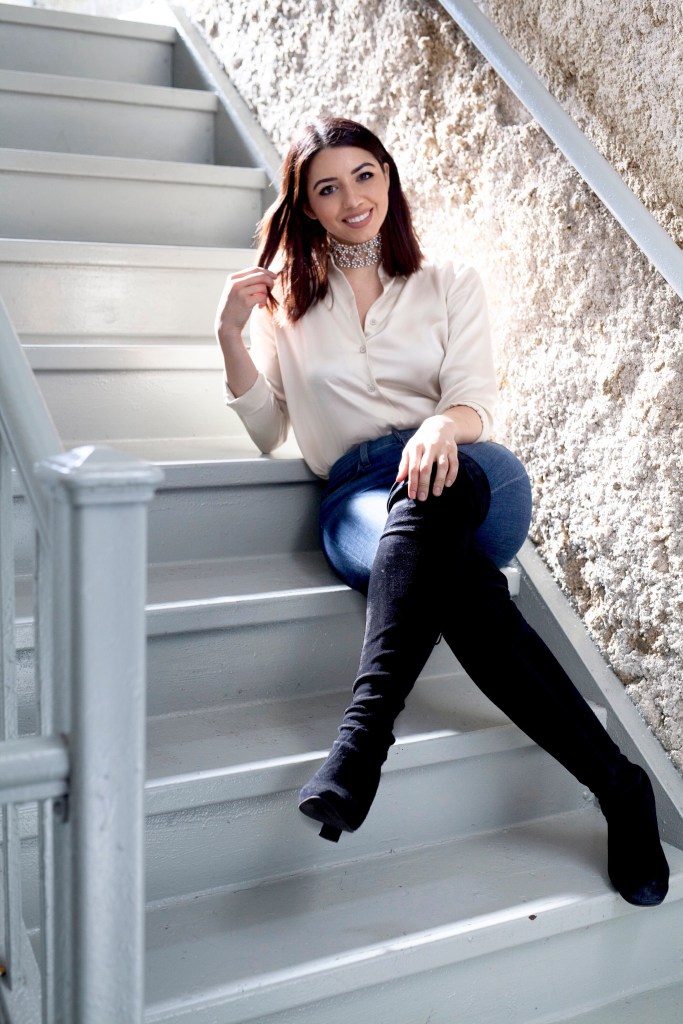 Still, Marjan has a lot left she wants to accomplish. For one, she has a list of dream celebrity clients, which include Selena Gomez, Ariana Grande and Jennifer Lawrence. And of course, like every other hairstylist, she has the goal of styling hair for the cover of Vogue. “Every creative’s dream is to do a Vogue cover, and that’s a huge career bucket list for me,” Marjan says.

But for now, Marjan is doing what she’s always been doing: working hard and not worrying about the competition, a lesson she learned from Atkin. (“The best of piece of advice Jen gave me was to not feel like you’re in a competition with everyone. Someone else’s success doesn’t dampen your own,” she says.) And though her life might look glamorous on Instagram, with selfies at celebrity parties and snapshots of luxurious destinations, she warns aspiring hairstylists that that’s only a small part of her job. “The biggest misconception is that it’s always glamorous. We spend a lot of time waiting around and waking up at 3 in the morning,” Marjan says. I’m sure there are moments where we get to be in great locations or with amazing designers, but it’s not always as glamorous as it seems. It’s a lot of grit and hard work.”

In our series, Inner Circle, we interview hairstylists, makeup artists, stylists and other assistant-type people behind celebrities on their start and the trials and tribulations they overcame to get to where they are today as a glammer to the stars.