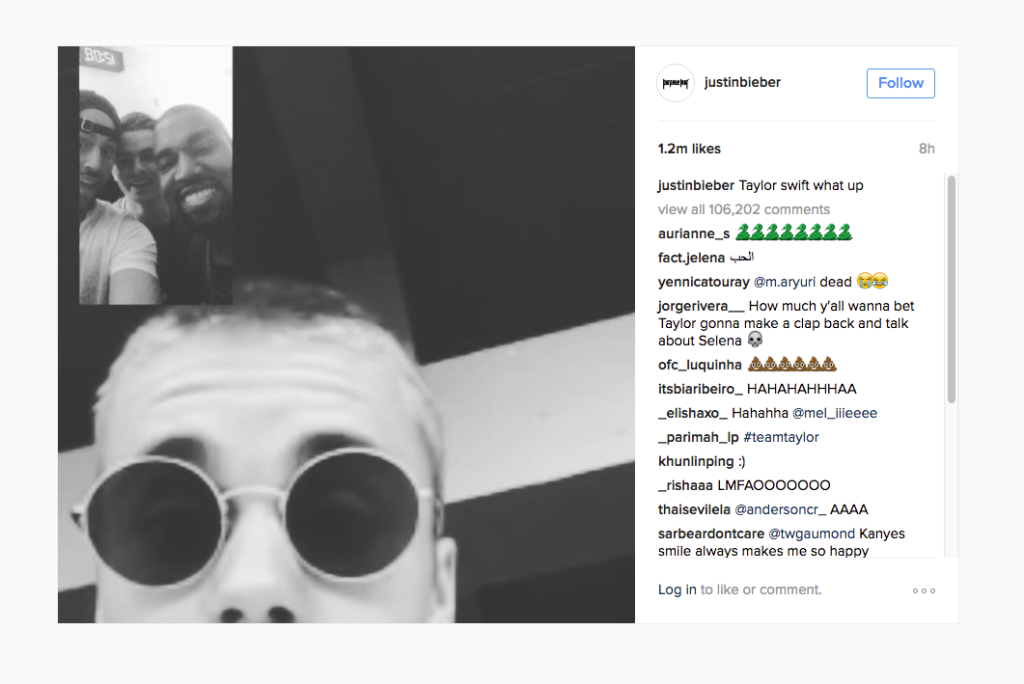 Just when the drama with Taylor Swift versus Kanye West and Kim Kardashian started to die down, Justin Bieber decided to announce he’s Team KimYe in a very real way. “Taylor swift what up,” he captioned a black-and-white shot of himself FaceTiming with West, leaving no ambiguity about his thoughts on the ongoing feud. J.B. and T.S. may have been pals in the past, but that era has clearly come to an end—at least for now.

Quick recap: The drama began back in the day, when West interrupted Swift’s acceptance speech at the MTV VMAs in 2009, as she won the award for best female video (and Beyoncé, to West’s chagrin, did not). After many ups and downs, West released the song “Famous” on his latest album, “The Life of Pablo,” earlier this year, in which he raps, “I feel like me and Taylor might still have sex / Why? I made that bitch famous.” Swift spoke out against the lyric; West (and Kardashian) said Swift approved it; Swift denied it; a couple of weeks ago, Kardashian Snapchatted Swift approving it. Obviously, Swift responded negatively to the Snapchats. And it’s been relatively quiet since then.

Until now. Bieber’s raised eyebrows (and, you know, caption) in his latest IG launched pretty much everyone who is Team KimYe on Twitter to post #TaylorSwiftWhatUp tweets. Here are 10 of our favorite reactions, because really, at this point, we all might as well get used to the fact that Swift and KimYe are going to have beef with each other on and off for all time, and the entire world is going to choose sides. It’s a spectator sport: We might as well follow along.