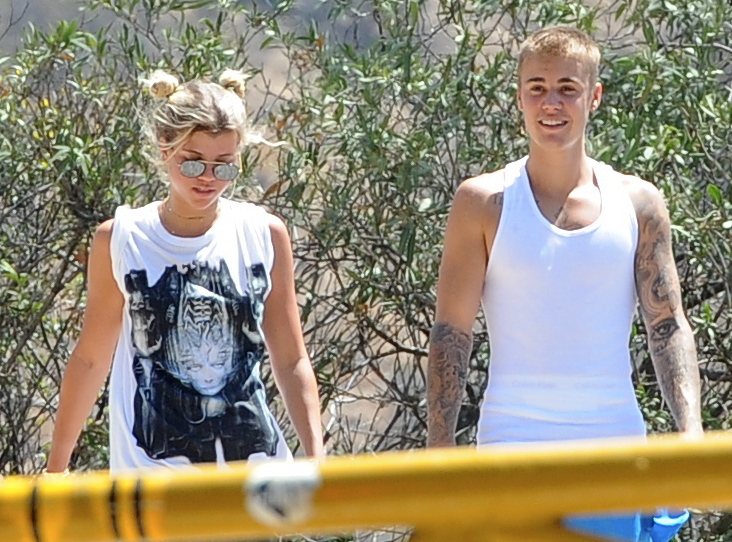 Justin Bieber may be trying to keep his new romance with Sofia Richie on the D.L., but she’s not being terribly discreet about it. A quick flip through her Snapchat reveals pretty much nothing but shots of Japan and Justin Bieber, so if he was hoping to play it cool, he’s short on luck.

In fact, Richie’s Snapchat is a bit of a humblebrag right now, showing off a Japanese wonderland, a video of Bieber tracks in music editing software with a zipped-lips emoji, and then—the tour de force—not one, but two videos of herself riding the back of a bike Bieber’s navigating.

The 17-year-old daughter of Lionel Richie (and sister of Nicole Richie) will be legally able to vote on August 24, but that doesn’t seem to keep Bieber from gallivanting the globe with her. Though both of their Instagrams are avoiding the outright announcement of their budding relationship, they did both post photos of themselves hiding from the camera in the past 24 hours. Observe:

Hint? Warning? Bizarre coincidence? We can’t say for sure, but Richie was spotted ambling out of Bieber’s Cali mansion in a sports bra and a pair of pajama pants a couple of days ago, which is the modern equivalent wearing your boyfriend’s varsity jacket to let everyone know you’re going steady. Then again, Biebs was just on the Hawaiian vacation of his life with ten thousand blonde girls that looked exactly like Richie, so he may be keeping his options open. This Snapchat story tells us that at least one of them is smitten. Scroll down for a compilation of the giggly, jittery excitement that is Richie’s Snapchat rn.