There has been a lot of drama around Justin Bieber, Selena Gomez and Hailey Baldwin Most of it has been turned into a frenzy by fans who are convinced there must be more happening between Bieber and his ex-GF. But now it appears Justin Bieber unfollowed Selena Gomez on Instagram at some point, which fans are freaking out about. 20 hours ago, the “Sorry” singer took to Instagram to ask people to leave him the eff alone. He posted a screenshot to his Insta story, calling out an Instagram account that has been posting fake news about him. Bieber wrote, “Please if you are following me please report them as bullying because they are! Making up lies and saying aweful hurtful things.”

So, first—this is, unfortunately, not the first time Bieber has been forced to ask someone on Instagram to stop spreading rumors about him. He lashed out at a user a couple weeks ago who claimed he and Gomez will probably reunite. (That’s sort of what started this whole re-fascination with Gomez and Bieber.) But second—the message Bieber wrote isn’t what fans are focusing on. In the screenshot, behind his text, you’ll see a familiar name under the category called “Suggested for You.” Gomez’s name was listed under suggestions for who Bieber should follow. And boy, can we relate. This isn’t the first time and it isn’t the last time that an ex will show up in your suggested follows on a social media site. Gomez was one of three suggestions caught in the screen grab—Gigi Hadid and Camila Cabello were the other two. 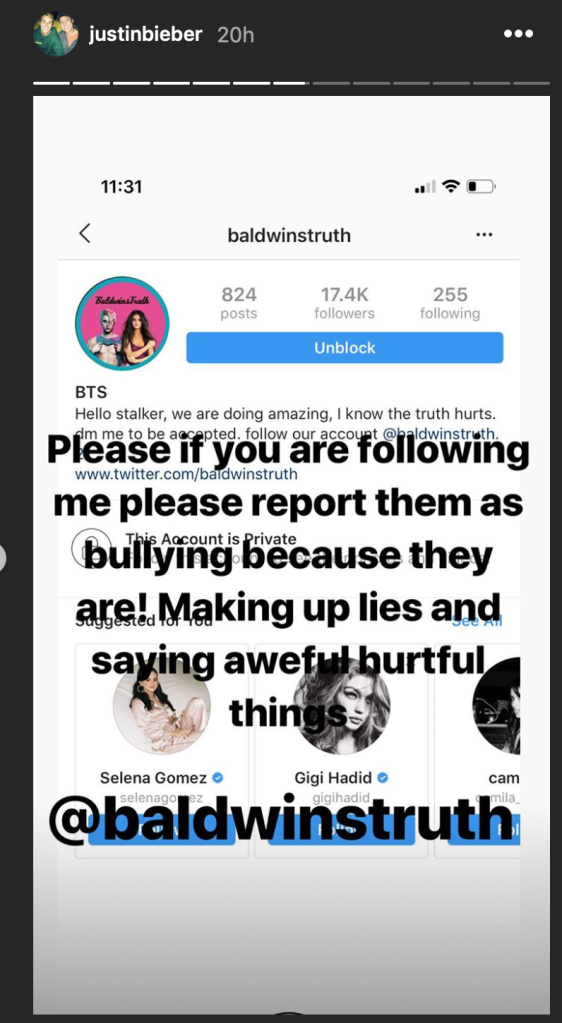 Most likely, Gomez is listed under suggested follows because they have a lot of mutual friends. He may also still have her contact in his phone, which, if his Instagram is linked to his number, would be a reason it would try to connect the two. Regardless, it’s probably not worth reading into this too much. They still appear friendly but have both clearly moved on.

Three days ago, Bieber shared a sweet poem for his wife, along with a black and white shot of the model.