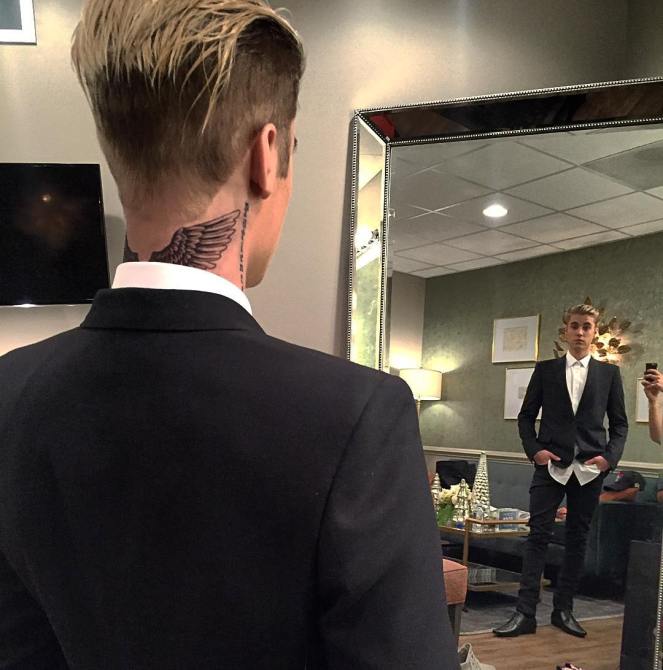 The Biebs isn’t the only celebrity to tatt up today. (Photo: Justin Bieber/Instagram)

In cased you missed the memo, this was, in fact, the week to get massive, possibly regrettable body art on large swaths of your person.

Need proof before you trot off to the local tattoo parlor for your own ink? Known body art enthusiast Justin Bieber, who has in recent years worked his way up from innocent, fresh-faced YouTube star to someone with full tattoo sleeves, just debuted a very large pair of wings on the back of his neck (which, in terms of actually getting inked—yeoooowch).

The 21-year-old “Sorry” singer, whose tattoo count is now up to 50, posted the shot to Instagram Friday, causing hoards of Beliebers to positively lose it.

But Justin’s not the only one who decided a big change was in order. Ben Affleck showed off a giant phoenix back tattoo on the set of an upcoming film on Friday that literally spans from right below his neck to his lower back. And sources told TMZ that (sadly) the yellow, blue, and red wyvern isn’t just elaborate makeup for the movie.

The ultimate rebound move? Maybe, although we’ve never personally known anyone who felt awesome about getting a giant dragon etched permanently on their back, there for the rest of their natural lives. And, because three makes a trend, earlier this week, One Direction’s Harry Styles got inked on live TV. So there you have it. Time to figure out what kind of tattoo you want, and do as the celebrities do.