The newlywed Biebers haven’t kept their marriage issues a secret. Just last month, they opened up to Vogue  about the challenges of married life. But now Justin Bieber and Hailey Baldwin are responding to breakup rumors. Last week, Us Weekly reported that the couple was still going through a rough patch and that their marriage was on the rocks. A source said that Bieber’s friends were “concerned about his relationship with Hailey,” specifically noting that the two are “still having trust issues and a hard time.”

The source added, “He still wants and needs her to be his wife and she wants to support him, but it’s hard when he’s going through all of this.”

While Baldwin didn’t address this article directly, her Instagram story on Monday, March 18, made it pretty clear that she’s shutting down the rumor mill. There might be some validity to what the source was saying—Bieber and Baldwin have been open about the challenges they’ve faced so far, but it seems a breakup is most definitely not on the table.

Baldwin shared the Instagram story writing, “don’t believe what ya read on the internet folks

🙄.” She added a lips sticker, a less-than-pleased emoji face and a “fake news” GIF. Clearly, Baldwin wants to make it *very clear* that she and her hubby are doing just fine. To be fair, a lot of rumors spread around like wildfire, so it makes sense that she’d want to nip it in the bud. It is interesting, though, that she didn’t specifically address the particular breakup rumor—perhaps she doesn’t even want to dignify it by saying it out loud…or, you know, via text on Instagram. 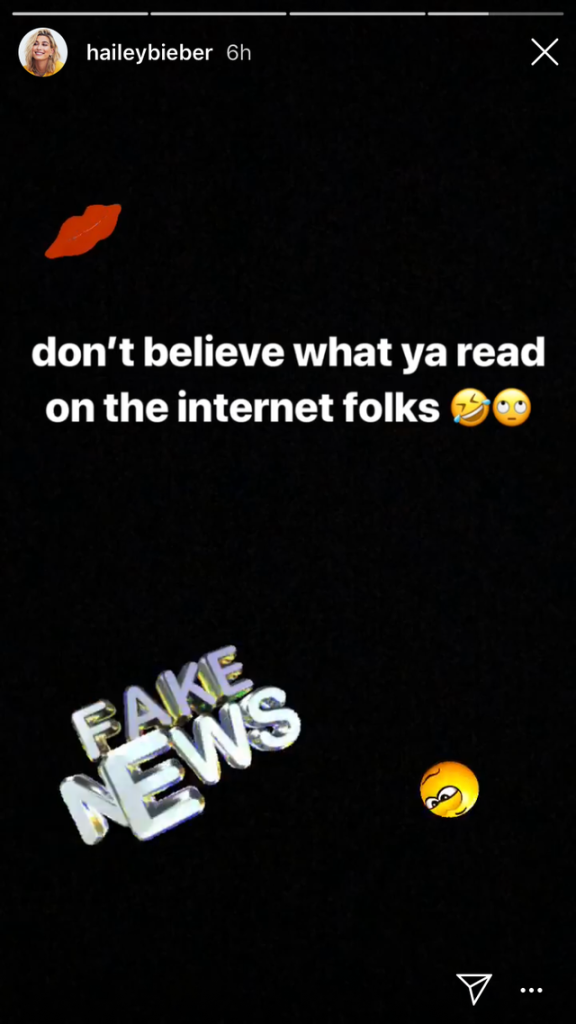 The couple was last spotted frolicking in Laguna Beach yesterday. Baldwin wore an adorable little pink bikini and Bieber opted for blue swim shorts. The pair seemed to be enjoying their time together.

Bieber also took a page out of Jim Halpert’s book of tricks by playing a prank on his wife. He surprised her in the hallway by yelling, “AHH” when she came around the corner.

Later he joked (JOKED) that she “don’t love [him] no more,” which prompted Baldwin to leap onto his lap and kiss him all over. We probably didn’t need quite that much PDA but hey—they do look happy!

Bieber has been struggling a lot, which he admitted in an Instagram post on March 10. But it seems he gets a lot of support from his wife and is working on bettering himself, as well as their relationship.

The “Sorry” singer wrote, “Just wanted to keep you guys updated a little bit hopefully what I’m going through will resonate with you guys. Been struggling a lot. Just feeling super disconnected and weird.. I always bounce back so I’m not worried just wanted to reach out and ask for your guys to pray for me. God is faithful and ur prayers really work thanks .. the most human season I’ve ever been in facing my stuff head on..”