Recently, our favorite Canadian-popstar-newlywed adopted two adorable kittens named Tuna and Sushi (which is seriously too, too cute,) yet he’s faced some serious backlash from animal rights activists for it—namely, because he spent a whopping $35,000 to purchase them. Last night, however, fans saw Justin Bieber’s clapback at PETA over kitten costs posted on his Instagram stories, and boy, is he angry.

While Justin’s been awfully busy this week—you know, getting married to Hailey Baldwin and all that—he clearly still has time to share some strong opinions in response to criticism. “PETA can suck it,” Bieber, 25, shared on October 3. He was not on board with PETA’s (People for the Ethical Treatment of Animals) objection to spending so much on exotic kitties—especially when there are thousands of rescues waiting to be adopted. Yet Justin was not interested in this perspective. “PETA go focus on real problems. Like poaching, and animal brutality. Ur tripping because I want a specific kind of cat? U weren’t tripping when I got my dog Oscar, and he wasn’t a rescue…every pet we get must be a rescue?” he wrote. Ok, Justin—though it looks like publicizing and promoting his exotic kittens on Instagram was part of the problem. 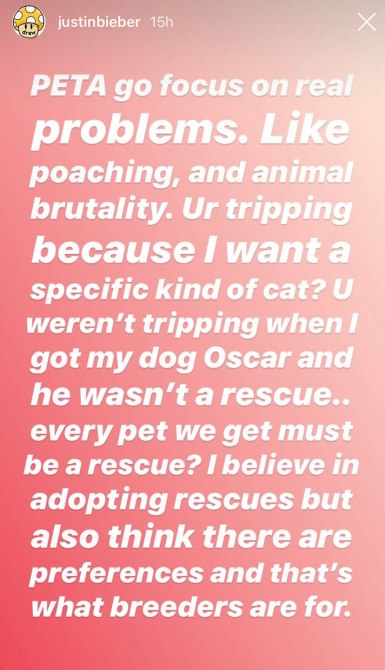 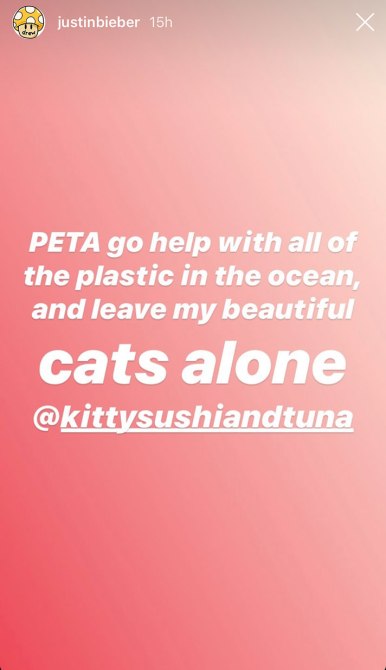 Tuna and Sushi both share an Instagram page, which, while adorable, does show his support of the sale of exotic animals, (for reference: Justin’s Savannah kittens would be illegal to own in cities like Denver, Honolulu, Dayton, or Boston.) Though Justin doesn’t think that this is an issue. “I believe in adopting rescues but also think there are preferences, and that’s what breeders are for,” he wrote. “PETA go help with all of the plastic in the ocean, and leave my beautiful cats alone.”

PETA Senior Vice President, Lisa Lange, spoke to PEOPLE about Justin’s response. “Baby, baby, baby, nooooooo,” she said. “Justin Bieber could inspire his fans around the world to save a life by adopting a cat from a local animal shelter — rather than fueling the dangerous demand for hybrid cats, contributing to the animal overpopulation crisis, and proving that when it comes to helping animals, his stance so far is ‘I don’t care.’” Point absolutely taken.