It’s always so strange when old drama bubbles to the surface again. But now it appears that we finally know the truth about a famous on-again, off-again couple. Was Justin Bieber cheating on Selena Gomez their breakup reason? It looks like that’s the real truth. There have always been whispers about infidelity in the former couple’s relationship. However, back in June, Justin has found himself entangled in a very public feud with Taylor Swift. Their rift forced past hurts and wrongs to come bubbling to the surface.

The drama began when Taylor called out Justin’s manager, Scooter Braun, for bullying her and attempting to trample her career. However, when Justin jumped to Braun’s defense–Swifties clapped back, bringing up his poor treatment of Selena. It looks like Taylor may have confirmed that Justin’s cheating was the cause of the demise of his relationship with Selena–even after their brief rekindling in 2018. Though she did not respond to Justin publically, the “ME!” singer got on Tumblr and liked a post that read, “we haven’t gotten to communicate our differences’ you cheated on her best friend and then publicly sided with the man who made revenge porn against her was she supposed to invite you over for tea??? Fuck outta here.”

In 2015, Justin himself alluded to his lack of faithfulness in his relationship. “We were working out how to be in a relationship, how to be ourselves, who we were, in the middle of having people judge our relationship through the media, ” he told ID Magazine.  “I think that really messed my head up too. Because then, it’s like trust and all this other stuff that starts messing with your mind. You’re on the road. And there are beautiful women on the road. And you’re just getting yourself into trouble…”

After breaking up, Justin and Selena got into a massive blowup argument on Instagram. 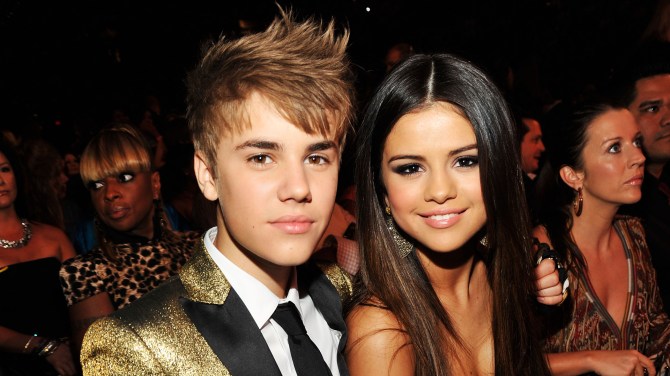 Despite the fact that Justin is now married to actress Hailey Baldwin–there still seems to be some lingering feelings or even animosity towards Selena. His recent song, “Don’t Check On Me” seems to allude to his former flame. His verse in the song is very telling. It reads:

Might run across your mind but don’t worry ’bout me, no / My heart is back in one piece, it ain’t skipped a beat, no / Feeling rested up, I ain’t missing sleep, no-oh / Don’t take it personal if I can’t reply now / I’m distant ’cause I don’t wanna be reached now / Won’t let the ghosts of our past weigh my future down / I’m liberated / Energy’s like a circle, it comes back around / Reciprocated / Don’t shed no more tears / Won’t gain no empathy from me / In the upcoming years / Oh, I don’t need your pity

All we know is, if you treat someone poorly and never make amends for it, it’s probably always going to haunt you.

Click through the slideshow for a look at the social media timeline of Justin Bieber and Selena Gomez's breakup.

11/6: The tweet that started it all. Justin Bieber was clearly eager to perform at the Victoria's Secret Fashion Show, where he serenaded the crowd as well as the stunning models. Immediately after performing, stories went up on various blogs saying that Bieber had been flirting with some of the Angels throughout the rehearsal process.

11/7: At the Victoria's Secret Fashion Show, model Barbara Palvin put up this picture on Instagram. While it seems innocent (and it probably was), Beliebers immediately started to question her motive for posting.

11/8: Palvin's Instagram was not the last we heard from her. Palvin and Bieber stepped out to see Broadway musical "The Lion King" (reportedly with a group including Bieber's manager Scooter Braun).

11/9: In the wee hours of November 9, Selena Gomez took to Twitter to repost a picture originally Instagram'd by Lil Twist, a friend of Bieber's. The picture features Palvin in the background. Gomez's caption, a very cryptic ellipses, sealed the deal. She was over it.

11/9: A few hours later, Palvin wrote that everyone needs to "calm down." Perhaps she was talking to the hoards of "Beliebers" who attacked her on Twitter, but there's no way she didn't catch word that Gomez wasn't happy.

11/10: Gomez wasn't nursing her breakup blues with a pint of ice cream and Lifetime movies. Instead, she was shooting a reunion for her smash hit show "Wizards of Waverly Place." In the early morning of November 10, she posted a photo of her cast mates with a caption that reads "That's a wrap.." Yes, the show had wrapped, but many speculated as to whether or not this was her confirmation of the end of the relationship.

11/10: Minutes after Gomez posted the photo of her "Wizards of Waverly Place" buddies, her best friend Francia Raisa took to Twitter to proclaim what a fool he was. Her other costars Ashley Cook and David DeLuise had more direct tweets for Bieber, but have since deleted them.

11/10: Jennifer Stone, another "Wizards of Waverly Place" star, had some choice words of Gomez's "cradle robbing."

11/10: On the night of November 10, Bieber performed a sold-out show in Boston. In addition to his usual act, he sang an acoustic version of "Cry Me a River," the Justin Timberlake ballad that he famously wrote following his much publicized breakup with Britney Spears.

11/10: In a radio interview the same day as his concert, Bieber was questioned regarding the breakup and stated, "I don't know what to say. I don't know what's going on in my life...To even assess that it doesn't make sense 'cause I have not made any comment."

11/10: Palvin has consistently attempted to silence everyone via social media, and remind people that they're just friends. However, it just doesn't seem to be working.

11/11: After the concert, Bieber thanked his fans for "focusing on the positive," which clearly means ignoring the swirl of negative press. We're eagerly awaiting the next development in this social media saga.