Taking a break. Justin Bieber canceled his tour to take care of himself. The “Stay” singer posted on his Instagram stories on September 6, 2022, that he’s taking a break from his Justice World Tour to focus on himself.

He posted the news on his Instagram stories with the following statement: “After resting and consulting with my doctors, family, and team, I went to Europe in an effort to continue with the tour. I performed six live shows, but it took a real toll on me. This past weekend, I performed at Rock in Rio, and I gave everything I have to the people in Brazil.” He continued, “After getting off the stage, the exhaustion overtook me, and I realized that I need to make my health the priority right now. So I’m going to take a break from touring for the time being. I’m going to be ok, but I need time to rest and get better.” He added, “I’ve been so proud to bring this show and our message of Justice to the world. Thank you for your prayers and support throughout all of this. I love you all passionately.”

This is the second time that Justin is canceling his tour. He previously postponed his tour after he was diagnosed with Ramsay Hunt Syndrome in June 2022. He posted on his Instagram stories, “This is pretty serious as you can see,” he said as he showed his inability to wink or partially move his face. “I wish this wasn’t the case. But obviously, my body is telling me I need to slow down.” A source revealed to Us Weekly on June 15, 2022, that “Hailey has been an absolute rock. She’s by his side for whatever he needs, as are his other close friends and family. [He] has every faith this will resolve itself eventually, but of course, it’s a stressful situation to be dealing with and a tough time for both of them right now.” 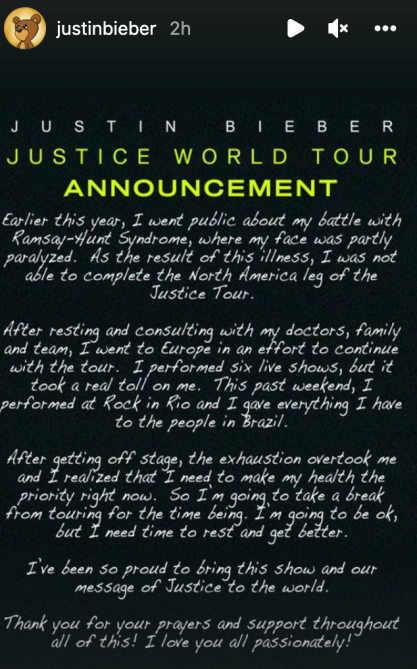 He and his wife Hailey Bieber have been together through their health problems. “Justin was such an amazing husband and a huge support system for Hailey when she was going through her own health scare a few months ago. He never left her side and she wants to reciprocate and be there for anything Justin needs,” a source told Hollywood Life. “Although it’s not the type of situation where Justin needs a caregiver, Hailey just wants to be by his side right now, even it’s just for emotional support. She’s his biggest cheerleader and wants to do anything she can to help the situation.”