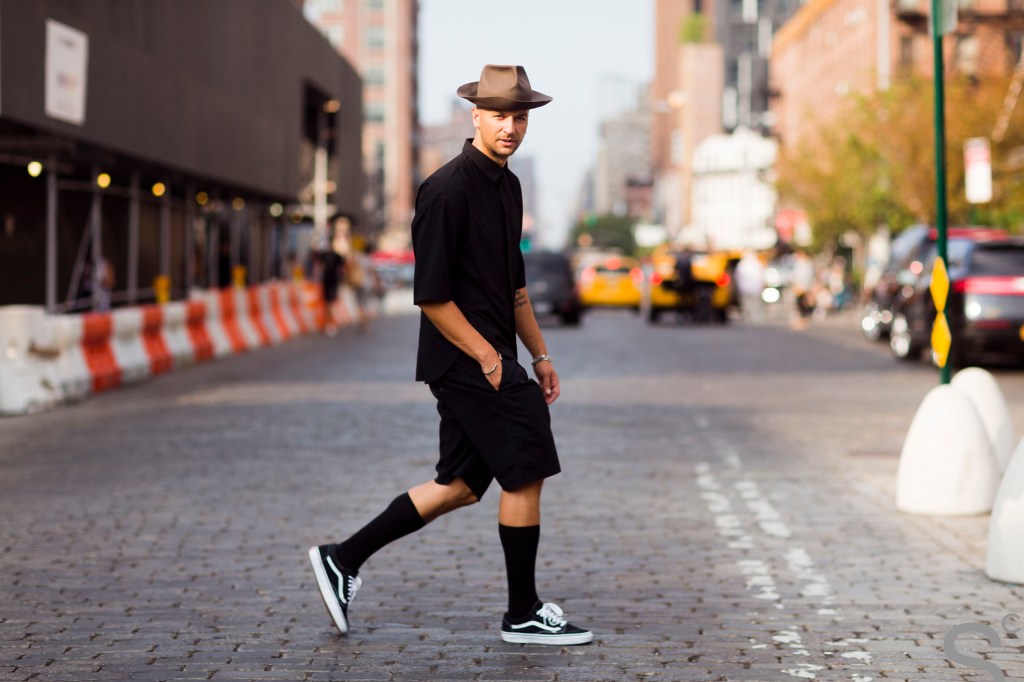 Let’s get one thing clear: Julien Boudet is “not a fan of that hipster trend” coming out of Williamsburg. Instead, the fashion photographer behind Bleu Mode, feels more inspired by the fashionable folks strolling around downtown Manhattan (NoHo, Soho, and Tribeca, specifically).

“New York is so difficult to describe, but if I were to do it, I’d say it is minimal and chic,” says the 30 year old, originally from the south of France. He transplanted to New York City nearly seven years ago, and he spent much of that time in search of what he calls the “decisive fashion moment” on behalf of major publications like GQ Japan, Nylon, L’Officiel, and more.

How would you describe your style?
I believe it’s a mix of minimal, avant-garde, and street. As a New Yorker, I wear a lot of black, but lately I started wearing more colors like beige, dark green, and a bit of red, which is pretty cool right now. My style is inspired a lot by the street culture (hip-hop, skateboard, street ball) but also by the rock ’n’ roll vibe.

What’s your approach to dressing?
My approach to dressing is pretty simple. I never spend an hour in my room before going out trying to figure out what to wear. It happens very quickly. I pick up a couple pieces that I feel like wearing and get ready in five minutes. Style is natural and should not be too forced or even planned.

Is there a piece of clothing or an accessory you never leave home without?
My white gold cross earring. I had it made for me in Southern France by this jewelry designer near my hometown. I started wearing it about five or six years ago. It’s a unique piece, and I think it’s part of me now, just like a tattoo. A lot of people know me as “the guy with the cross earring.”

What are some of your favorite stores and restaurants in New York City?
Favorite stores: Boris Bidjan Saberi and Hotoveli have the best clothing and design; Le Labo for amazing fragrances; St. Marks Bookshop has the best selection of books; Cafe Colombe in NoHo for great coffee; Cafe Orlin for a delicious brunch outside.