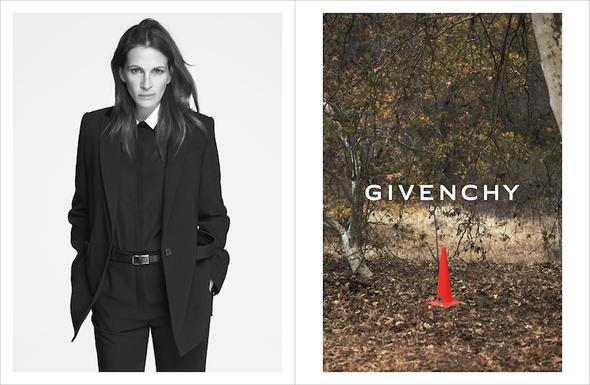 News of who will be starring in the Spring 2015 ad campaigns has begun to trickle in—starting with news that Madonna would reprise her role as the face of Versace—and here is latest to get excited about, Julia Roberts has just been announced as the new face of Givenchy. Just look at the photos, it’s hard to argue that the 47 year-old looks damn good.

The ads, shot by Mert Alas and Marcus Piggott, show off Roberts’ cool girl androgynous side, something the world doesn’t get to see much from the actress who built a career on being America’s “Girl Next Door.”

She doesn’t do fashion shoots, she doesn’t do covers, she doesn’t do all of that. But still, she’s one of the most well-known people in the world. Even my mom and my sisters—they care about fashion because of me, but they don’t really follow fashion—their reaction was so excited…Today, celebrity has become so much [about] how many followers you have, how big you are on Facebook. For me, she represents a pure talent and a pure beauty. So many celebrities are celebrities today not because of their talent. That’s fine, it’s the moment today. But she’s an iconic actress.

Is it just us or does Tisci seem to be giving a slight dig to his BFF Kim Kardashian here, who of course is most famous for her social media following? Whatever led to the choice, it is hard to argue with Tisci’s on what makes Roberts great.

As for the tone of the shoot, Tisci wanted Roberts to go against the image she is best known for, and, gasp, not smile. “I said to her, ‘Because your smile is so beautiful and everybody knows you for that, I think it should be no smile,’ and she was really cool. She said we should go for it. We did it, and there we are, I’m very happy. It’s a powerful picture.”

What do you think of the photos! Weigh in below!