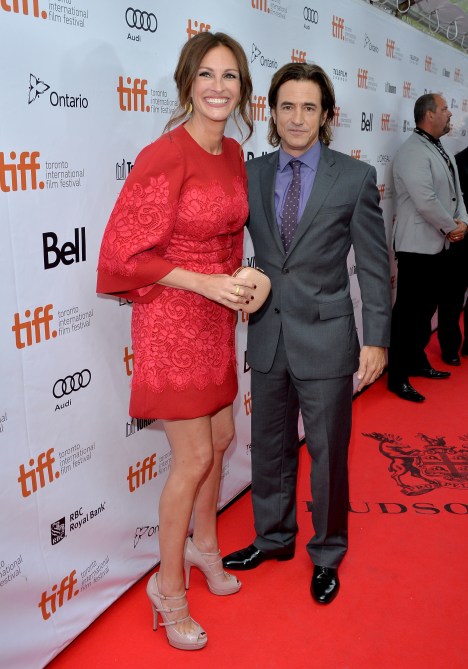 It’s becoming increasingly clear on the runways of New York Fashion Week that the ’90s are back with a vengeance,  so it’s only appropriate that we revisit one of our favorite flicks from the era: “My Best Friend’s Wedding.” The 1997 smash hit, starring Julia Roberts as an effortlessly gorgeous food critic and Dermot Mulroney as a studly guy marrying a college coed played with gusto by Cameron Diaz, is one of our favorite throwbacks. So naturally, we were stoked to see the co-stars’ adorable red carpet reunion last night.

The duo star in the forthcoming film “August: Osage County,” based on the wildly successful Broadway play, alongside other powerhouses like Meryl Streep and Ewan McGregor. For its premiere last night at the Toronto International Film Festival, they stepped out looking chic as can be, and not much older than they did 16 years ago. Roberts stunned in a red lace Dolce & Gabbana mini, which was reminiscent of a frock Selena Gomez wore to the ESPY Awards back in July. And of course, Roberts accessorized with her infamous megawatt grin.

At 45 years old, Roberts looks better than ever—and although we totally respect that she lives out of the spotlight with her husband Danny Moder and their three children, we selfishly want her back in the public eye. In fact, we may even “say a little prayer” for more Julia in our lives! Oh, we went there.