We didn’t ask for this. And we definitely can’t unsee it. But we’re also not entirely mad. We don’t know whether we should have expected this, or if we should be surprised by this fact—but somehow, The Jonas Brothers’ old age FaceApp photo is still attractive. The old-age feature on the app is sweeping the nation and everyone and their dog is getting a glimpse into their future. It’s not pretty. With every download of this app, ten new face oils and 20 new anti-aging products are being purchased (that’s not a real fact…but we can hear the bank accounts draining, can’t you?).

This app has actually been around for quite some time, but for some reason, the latest trend is to see what you’d look like at about the age of 80 years old. Celebrities everywhere are trying it out. So how does the app work? Well, to start, you’ll need a well lit photo of yourself. The app uses artificial intelligence to read your face. From there, it can transform you into a different gender, a younger person or—the most viral selection rn—an old person.

Naturally, the Jonas Brothers—always down to try anything—hopped onto this trend. And the photos are hilarious. Nick Jonas hit fans with this photo late last night, and the reaction has been wild, to say the least. One fan jokingly commented, “I’ve been to the year 3000 not much has changed but nick Jonas is old.” Another fan added, “This is messing with my head, man.” Same, dude, same.

Then, all three of the Jo-Bros decided to try it out and, well, see for yourself:

It’s disturbing but also at the same time…they look good for their age! How is that possible? 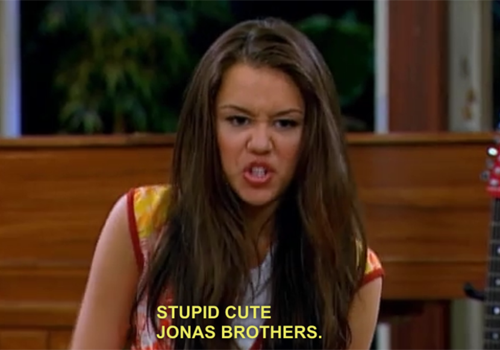 Then for good measure, Drake threw this photo out into the ether:

Then this happened, and well—we don’t want anymore of this.

OMG, who are these new cute kids on MTV in 2006? They're called the Jonas Brothers! To put things into context: The boys appeared on MTV for the first time with JoJo.

Photo ops at Magic Mountain is basically a rite of passage for any kid stars in the mid-2000s.

Here, the bros are getting a little more grown-up with their fashion choices. It's also the time when Kevin decided to make a neck bandana his short-lived signature.

Why is Miley getting all the credit for hanging out with oversize stuffed animals?

We're so into ties right now, you guys.

And now we're so into sport jackets and sunglases.

In early 2008, the JoBros clearly decided that hair would be the focial point of their look.

The Jonas Brothers embracing modern times in denim shirts and cardigans in 2012.

The Jonas Brothers Perform At The Gibson Amphitheatre

Nick Jonas shredding it like a rock star at the Gibson Amphitheatre in 2013.

At the Miss USA pageant in 2013, the boys hit every dress code possible: A tux, a suit, and jeans and a tee.

All grown up: Joe gets ogled by Miss Idaho and Miss New York during the 2013 Miss USA pageant.

Here's Joe in 2013 wearing his now-signature all-white outfit, which he seems to think is really cool since he wore it to about 10 appearances this year.

Jordyn Woods Is Done With All Of The Fake News That's Being Spread About Her...