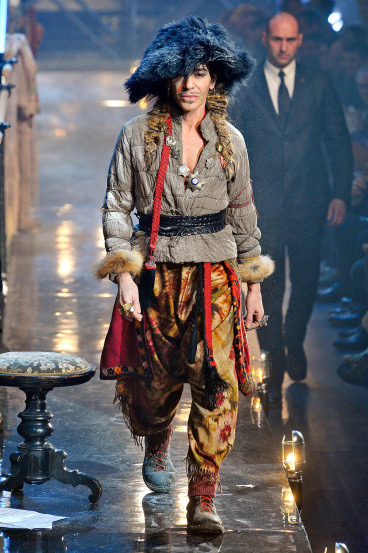 Former Dior creative director John Galliano‘s trajectory since he was shown on video going on a severely intoxicated anti-Semitic rant back in 2011 has been incredibly troubling. However, after losing everything, he seems to be regaining a bit of footing in the industry. With the help of Oscar de la Renta, who allowed the disgraced designer to work at his studio in February, Galliano was a hot discussion topic during New York Fashion Week (despite a New York Post cover story that suggested he was mocking Hasidic Jews with his attire.) Then, it was announced that Galliano would be teaching a workshop at Parsons, but amidst a slew of criticism and Galliano’s own objections to the curriculum, it was cancelled.

Today, in a just-released Vanity Fair interview with Ingrid Sischy, the 52-year-old fashion industry legend finally speaks—and he dishes about everything, from his wildly offensive comments to his rampant substance abuse problem.

Read on for everything you need to know about Galliano’s interview.

1. It’s his first sober interview ever. Galliano has given quite a few interviews in his day, but now he’s copping to the fact that they were all under the influence. At the time of the interview, he noted that he’s been sober for over two years. “I was going to end up in a mental asylum or six feet under,” he said of his drinking and drug use leading up to the controversial incident.

2. Galliano insists he is not anti-Semitic or racist. His hurtful comments towards Jews were heard around the world, and many have yet to forgive him—like the hundreds of people who protested against him teaching a class at Parsons School of Design. Yet he insists he was misunderstood. “It’s the worst thing I have said in my life, but I didn’t mean it…I have been trying to find out why that anger was directed at this race. I now realize I was so fucking angry and so discontent with myself that I just said the most spiteful thing I could,” he said. His assistant alerted him to the video where he praised Hitler, and he “threw up” when he saw it.

3. To atone for his actions, he’s been learning about Jewish culture. In order to own up to what he has said and done, he’s been researching Jewish history, including reading books on Jewish tradition as well as the Holocaust. He’s grateful for what happened because it inspired him to learn and better himself, telling the mag, “It sounds a bit bizarre, but I am so grateful for what did happen. I have learned so much about myself. I have re-discovered that little boy who had the hunger to create, which I think I had lost. I am alive.”

4. His drinking binges were out of control—and started increasing once he had more collections to design. While Galliano claims he didn’t use alcohol to inspire creativity, he eventually found it as a way to escape the pressures of the industry. He stated:

“At first alcohol was like a crutch outside of Dior. Then I would use it to crash after the collections. I’d take a couple of days to get over it, like everyone. But with more collections, the crash happened more often, and then I was a slave to it. Then the pills kicked in because I couldn’t sleep. Then the other pills kicked in because I couldn’t stop shaking. I would also have these huge bottles of liquor that people got for me. Towards the end, it was whatever I could get my hands on. Vodka, or vodka-and-tonic. Wine, in the belief it would help me sleep. Wrong. I did manage to stop the voices. I had all these voices in my head, asking so many questions, but I never for one second would admit I was an alcoholic. I thought I could control it.”

His binges grew darker and darker, and he found himself on the edge of despair. “Not having washed, I’d be covered in sores and humiliated. I had the tremors. I wouldn’t sleep for five days. I would go to bookstores and get some self-help books, but I was in denial. I’d throw myself back into the gym. I’d be careful about what I ate. And, of course, the whole cycle would start again,” he said.

5. Kate Moss’ wedding “saved” him. Galliano famously designed Kate Moss’ wedding dress when she married Jamie Hince back in 2011. A few weeks into his time at an Arizona rehab, Moss—a longtime friend—contacted him to ask if he would do it. “Creating Kate’s wedding dress saved me personally because it was my creative rehab. She dared me to be me again,” he said. Moss said that during her father’s speech, “he thanked everyone and then he referred to the genius of Galliano, who made his daughter’s dress. Everyone stood up and gave John a standing ovation. It was the most moving thing, because suddenly John realized he wasn’t on his own.”

What do you think of Galliano’s first interview since rehab? Head to Vanity Fair for more!