Since Killing Eve, Jodie Comer has won an Emmy, starred in a Star Wars movie and become more rich than Villanelle could ever steal. So what is Jodie Comer’s net worth? While the English actress isn’t worth as much as her Killing Eve costar Sandra Oh (who’s worth an impressive $25 million), she has made a lot of $$$ from BBC’s critically acclaimed show.

Killing Eve, which premiered in April 2018, follows a British intelligence investigator (Oh) who becomes obsessed with a psychopathic assassin named Villanelle (Comer.) Since the series, which is based on the Luke Jennings’ 2018 novel Villanelle, Comer has become a breakout star. In 2019, Comer beat out actors like Viola Davis, Laura Linney, Robin Wright and her own Killing Eve costar, Oh, for the Outstanding Lead Actress in a Drama Emmy. Later that year, Comer went on to star as Rey’s mother in Star Wars: The Rise of Skywalker, and it doesn’t seem like her career is slowing down anytime soon.

As Villanelle, an international assassin whose accent is iconic as her murders, Comer has become an instant fan favorite for her scary-yet-charming portrayal of one of the world’s most beloved fictional serial killers. But what is Jodie Comer worth? Well, we examine that ahead.

How Much Does She Make on Killing Eve?

As of now, Comer and Oh’s salaries for Killing Eve aren’t known. (Though there are some sources who report that Oh is making at least $350,000 per episode, given her Grey’s Anatomy income.) Still, with close to a million viewers each week, we expect that Comer is making big bucks from Killing Eve. (Maybe not as much as her more established costar, but still a lot.) That said, even though we’re sure her Killing Eve money is up there, Comer revealed in a 2018 interview that she continues to live with her parents in Liverpool. “I live in Liverpool, still at home with my mum and dad. I get the best of both worlds,” she said at the time. “I’m here now for six months [filming in London], but as soon as that six months is over, there’s nowhere else I want to go other than home…I just love Liverpool. I love London, but I like to leave.” 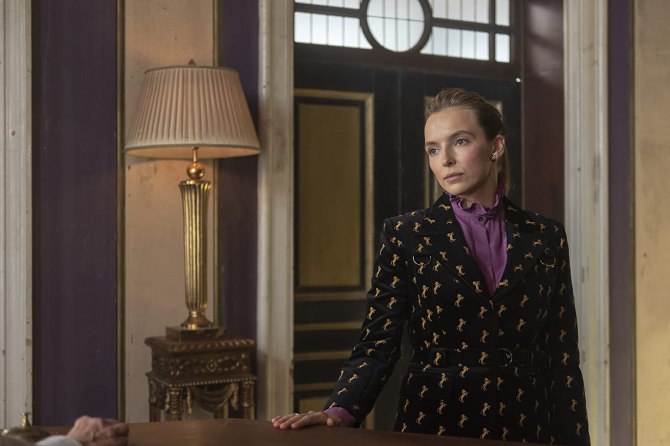 Ah, much is Jodie Comer worth? According to Celebrity Net Worth, the actress is worth $3 million—a lot less than Oh’s reported $25 million, but who’s complaining about $3 million? Along with Killing Eve, Comer has also starred series like Justice, My Mad Fat Diary, Thirteen and Elizabeth of York, which only adds to her worth. Her Emmy and role in a recent Star Wars movie also contributes to her stock.