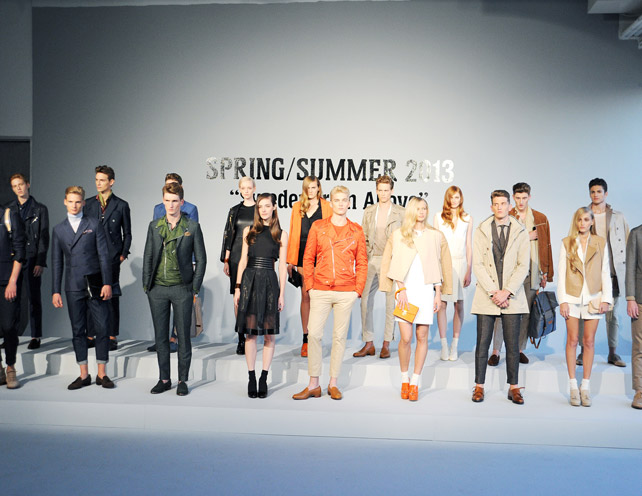 J.Lindeberg presented its Spring 2013 collection (a re-introduction for the brand into the American market) at New York Fashion Week on a second floor space at Pier 59 studios overlooking the Hudson. As guests sipped cocktails and viewed the photography of the collection by Peter Lindbergh and Jörgen Ringstrand we got to catch up with Nicks Ericsson, the brand’s publicist and close collaborator of designer Jessy Heuvelink.

“We really wanted to concentrate on our Scandinavian roots, as this is our re-introduction into the U.S. market,” said Ericsson. “The collection is named ‘Sweden from Above.’ Jessy was flying over Sweden and noticed the landscape. It’s a long country, and the colors of the earth change dramatically from North to South, that is what he was trying to capture.”

Indeed, the colors of J.Lindeberg’s latest collection did look like a beautiful landscape painting. While the men on the left dressed in dapper dark and forest green suits; as you moved to the right women looked warm in bright orange, presumably the sun; and on the end were brilliant khakis representing the beaches. The collection was sculptural, rather like the fields in Sweden, and in addition to his own views from above, Heuvelink used a book also titled Sweden From Above as a reference to recreate the patterns and movement of the country with subtle details.

On the idea of re-entering the U.S. market, Ericsson said, “While we have stores open in the States, we are refocusing on our wholesale business and our menswear line.We will also be opening more stores all over the U.S. and in collaboration with Peter and Jörgen start advertising here again and talking to the young consumer.”

As for what Ericsson believes sets J.Lindeberg apart from other menswear designers, he said, “It’s our silhouettes. It’s very unique and flattering. Specially for a man who is tired of wearing something that is too corporate or boxy. Also, our value; as Scandinavians, there’s always the idea of the right price for the right product.”

So if you’re a man who loves dressing up or is required to for work, but wants something modern, crisp and Scandinavian look no further than J.Lindeberg’s collection. You won’t be disappointed. And ladies, the holidays are fast approaching …