Jessica Rothe has gotten married twice during the pandemic—once on film and once in real life. She and Harry Shum Jr. (Glee, Crazy Rich Asians) are bringing the love and tears with their new movie, All My Life, based on the true story of Jenn Carter and Soloman Chau. We chatted with Rothe about her movie wedding, her real-life wedding (in the middle of pandemic!) and that iconic Game of Thrones role she auditioned for.

I confessed to Rothe that when my co-worker asked what the movie was about, I said, “Oh, it’s like a musical-ish romantic cancer comedy.” And there was complete silence. Then he said, “Oh, do they sing about cancer?” Rothe quickly interjected, “That’s a great logline. That’s the kind of thing that will get butts in seats.”

So yes, there is singing, dancing, love, and cancer. Yes, cancer. The love story follows Jenn and Sol, a couple, who falls in love and then learns that Sol has liver cancer. What drew her to this bittersweet love story? “My agent sent it to me with a note, ‘I hope you have tissues.’ I was a hysterical, sobbing mess by the end. But the film has so much heart and hope and love interwoven in it.”

She says her character is about the “journey of a person who is trying to understand, wants to be a partner and wants to help. But at a certain point, you reach a level where, you just don’t, you can’t understand.” Mostly, she likes how honest their relationship is. “We see a couple dealing with this disease, but also the messiness of being in a relationship, trying to communicate and fight for what you need, but also what your partner needs. And I think there need to be more love stories like that out there.”

She spoke in-depth with Jenn, the woman her character was based on. They spent hours on FaceTime. “We talked about everything from the intimate details of her and Sol’s relationship, to our cute dogs, to what we were watching on Netflix.” She also “low-key internet stalked Jenn and Sol,” and found footage of their amazing flashmob proposal.

Harry Shum Jr. is a Better Dancer Than You

Asked to describe Shum in one word, Rothe said, “Kind. He’s got the kindest eyes, he’s also incredibly handsome, charming and super goofy—and the best dancer I’ve ever met in my life. And like me, a workaholic and very committed to his craft and an incredibly talented person.” That’s not one word, but we’ll take it.

How did Shum and Rothe not cry all day on set? Rothe says, “Jokes, dancing, and a bit of sobbing.” (Um, sobbing is extreme crying. So to not cry, they cried). Since they couldn’t have a real movie premiere, Shum and Rothe decided to have their own socially-distanced two-person premiere party in her backyard.

Rothe’s favorite scene to film was also her most challenging, at least physically. After their characters are married, she and Shum jump into a huge fountain in their wedding outfits. “It was just so romantic and fun.” But also not fun, the water was freezing. “I had all these plans, I was going to like spin and jump and cartwheels in the fountain.”  Unfortunately, her dress had other plans. “My dress took on 40 pounds of water weight.”

As for her most emotionally challenging scene, Rothe says there were two. One was the fight scene between her and Shum. “The fight scene was really fun, but very exhausting for both of us. We kind of let loose at each other. The other one that was incredibly emotionally draining was the scene in the car. The screaming. But I actually love moments like that, they scare me.” 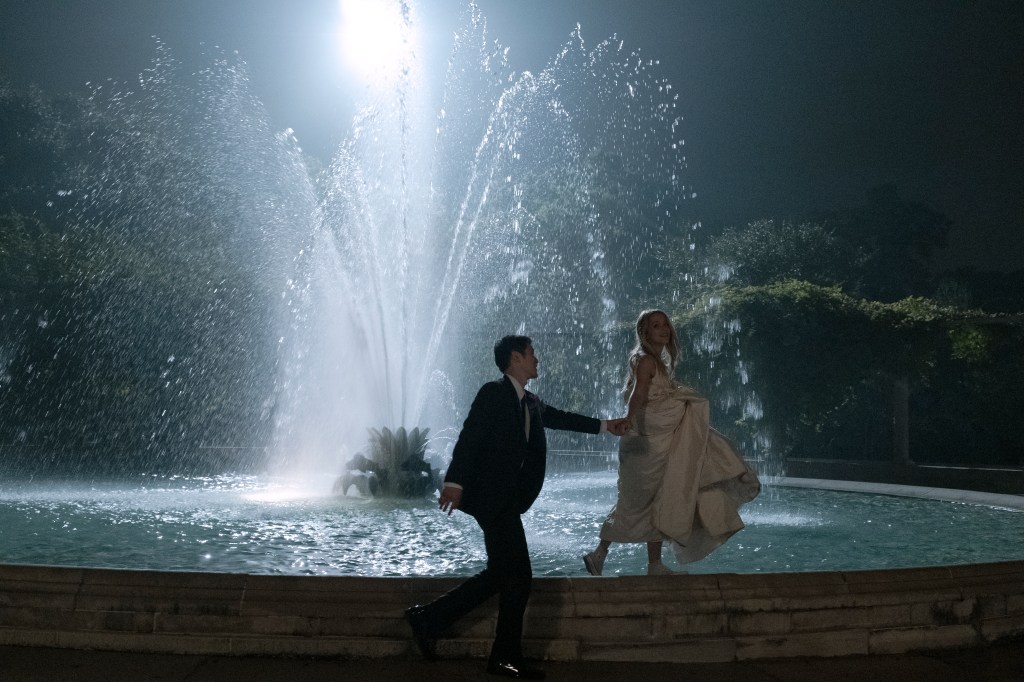 Married in a Pandemic

“We were originally supposed to get married July 4th because it was going to be a holiday weekend to be able to travel to Colorado, Rothe says of her and now husband, Eric, who’ve been together almost 8 years. “It was going to be 100 to 200 people, pizza truck, whole nine yards. And then Covid came along. So that would not have been a safe or responsible thing to do with other humans. So we pretty early on knew we were going to have to pivot.” And pivot they did. With a small group of Covid-tested family, they had their dream wedding in Colorado.

“We streamed it for all of the rest of the guests who couldn’t be there. The costume designer of the film Happy Death Day, who’s one of my dear friends, made us these amazing masks that all matched. We did the whole thing outside. It was perfect. I wouldn’t change a single thing. I wore my wedding dress. He had a suit on. Our dog, Otis, had a matching bow tie.” So was her dog the Reverend? Ring bearer? “Otis was the unofficial ring bearer. We’re both obsessed with him. He walked down the aisle and then when our official ring bearer gave us the rings, Otis would not leave. He curled up on the train of my dress and slept there for the rest of the ceremony.”

So who’s the better dancer? Harry, her film husband, or her real husband? No contest. “Harry for sure. And Eric would tell you in a heartbeat. My husband only dances at weddings after he’s had something to drink and sometimes in the kitchen with me if we’re feeling goofy. There were a couple of moments in the movie where I was like, “Oh, Eric’s going to be jealous. And one of them was Harry dancing. And the other one was the proposal.” 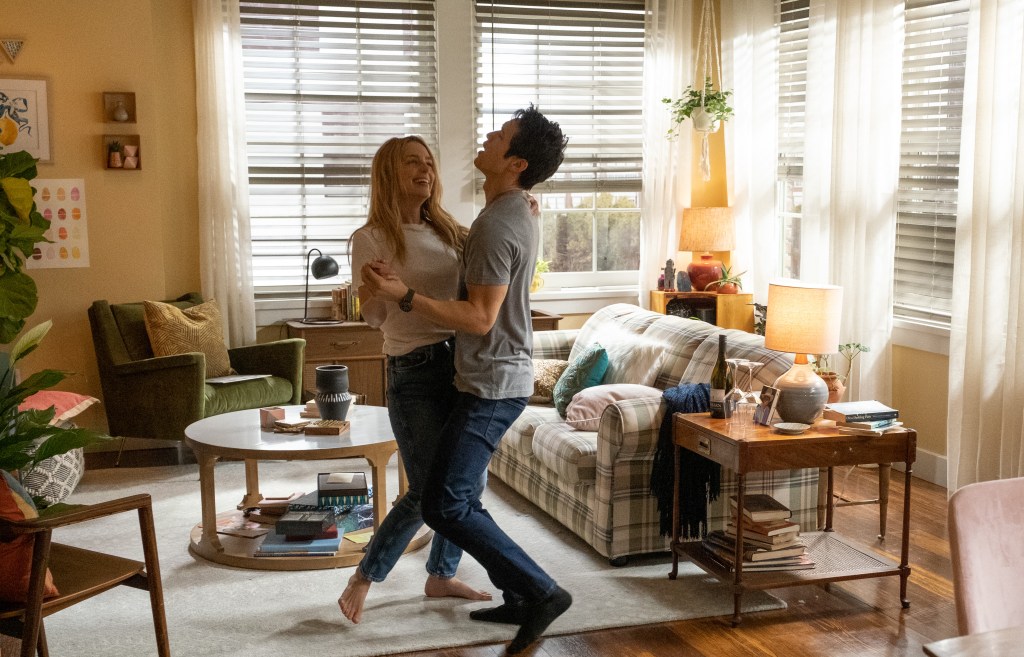 And what does the future hold? I asked Rothe if there would be a Happy Death Day 3, and if so, would she want to be in it? Short answer, yes and yes, death becomes her. (Not real death). “I would, 150 percent, be down. The fan base for that film is so incredible. I love our fans. I love Tree. I love what a badass kickass heroine that she is. I got to check so many things off my bucket list by being in those films.” She credits Blumhouse, Universal and Chris Landon for creating such an amazing “scream queen” character for her. “I want to finish up her story in terms of the third one.” As for Happy Death Day 3, she reveals, “I know Chris Landon has the story. I know he has it all figured out. I don’t think that there’s a script yet. He’s kind of waiting for the thumbs up from the powers that be. But we are so excited to make that film. We just want to make sure to do it in the right way at the right time, because we don’t want to shortchange Tree’s journey and we don’t kind of want to give the fans anything less than the best that we could possibly do. We’ll see, 2021. It’s a new year.”

That Game of Thrones Role She Knew She Didn’t Get

When asked if she could recall auditioning for any role that may surprise people, she laughs and says she has one that she knew she didn’t get. “I auditioned to play Daenerys on Game of Thrones.” So she was “Almost Daenerys”—it’s like Almost Famous except with dragons.

“I didn’t even get a callback. I was so green and so new. They didn’t even have me use a British accent. They didn’t give us a script. I had no idea what was going on. I was like, ‘Who’s this girl with violet eyes who talks to dragons?’ And then cut to Game of Thrones is the biggest thing on TV,” she laughs. “I think the girl going in before me was dressed all in leather. I was in a T-shirt and jeans.” (Frankly, jeans and a T-shirt is probably much more comfortable when riding a dragon).

“I love that show so much,” she says. But she’s relieved that she didn’t get it, because she wouldn’t have been able to enjoy it as a fan. ““As amazing as it would have been to be on that show, if I had been in it, something would have been taken away from me, from my enjoyment of watching and getting to experience the zeitgeist, pop culture phenomenon of it all.”

But what did she think about the Game of Thrones finale? Silence. RIP Game of Thrones finale, you wounded all of us. Stabbed us like Jon Snow stabbed his aunt/lover. Oops. Spoiler. As for the finale, Rothe says, “I was sad, I was really sad, but I think that Amelia Earh—Emilia Clarke killed that role!” Amelia Earhart flew planes and Clarke flew dragons, basically the same person.

All My Life was released December 23 on PVOD and Amazon Prime
. So grab some tissues and check out Rothe and Shum’s “musical-ish romantic cancer comedy.” I asked Rothe if she and Shum were to have a dance-off, how that would go down, and she said, “I will lose so hardcore. But I will give it my all. It will be the best Zoom dance-off we’ve ever had.”