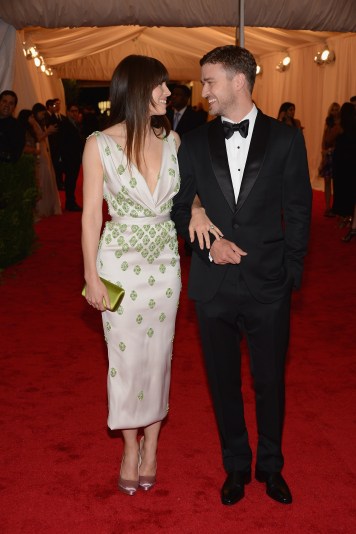 After Jessica Biel and Justin Timberlake tied the knot in Italy last Friday, we’ve been waiting eagerly for the exclusive People photos (out tomorrow — that they were supposedly paid $300,000 for) to see what Biel wore. Now, details about the A-list wedding attire are finally coming to light.

Stylist Bobbie Thomas took to her blog and wrote, “Jessica was pretty in pink, as she opted for a color infused dress instead of traditional white. The full princess-like silhouette was designed by Giambattista Valli (who also dressed the bridesmaids & mothers). Justin, his men were handsome in Tom Ford.” The post has since been deleted, but we’re hoping it’s true.

While it was widely rumored that Biel would opt for a gown from designer Elie Saab, she also has a penchant for Valli’s designs. Most recently, she wore a white feathered frock from the designer on the “Total Recall” red carpet back in August.

Biel isn’t the only star who has gone against the grain and chosen to walk down the aisle in a colorful gown. Recently, Amber Tamblyn wore a yellow dress while tying the knot with “Arrested Development” funny man David Cross.