Content warning: This story contains details of sexual abuse. Cheer season 2 left viewers with questions about where Jerry Harris is now and if he’s still in jail after his arrest in September 2020.

Jerry—a cast member on Netflix’s Cheer, a docuseries about the Navarro College cheerleading team in Corsicana, Texas—was arrested on September 17, 2020, on federal charges of the production of child pornography. Jerry pleaded not guilty. “We categorically dispute the claims made against Jerry Harris, which are alleged to have occurred when he was a teenager,” a representative for Jerry said in a statement at the time. “We are confident that when the investigation is completed the true facts will be revealed.”

Monica Aldama, Jerry’s coach at Navarro College, broke her silence on his arrest in an Instagram post in September 2020. “My heart is shattered into a million pieces. I am devastated by this shocking, unexpected news. Our children must be protected from abuse and exploitation, and I’m praying hard for the victims & everyone affected. Please respect our privacy as our family mourns during this time,” she wrote.

In an interview on the Tamron Hall show in January 2022, Monica revealed that she was about to film the first episode of Dancing With the Stars season 29, which she was a contestant on, when an executive producer from the show told her about the allegations against Jerry. “I was on the stage. We were about to go into the full dress rehearsal and that’s when the executive producer came up to me and asked me if I had seen the headlines and, of course, I had not,” she said. “I was just taken aback and it kind of took the breath out of me for a minute and all I could read is the headline. I couldn’t read the actual article. I still haven’t read the actual article … I told her I couldn’t even look at that until I got finished with the show that night.”

She continued, “I couldn’t read anything. I had to stay emotionally strong because I was already a wreck thinking about doing Dancing with the Stars. I just tried to hold back until I got through that night and let all the emotions pour in.” Read on for where Jerry Harris is now and what happened to him during Cheer season 2.

What happened to Jerry Harris? 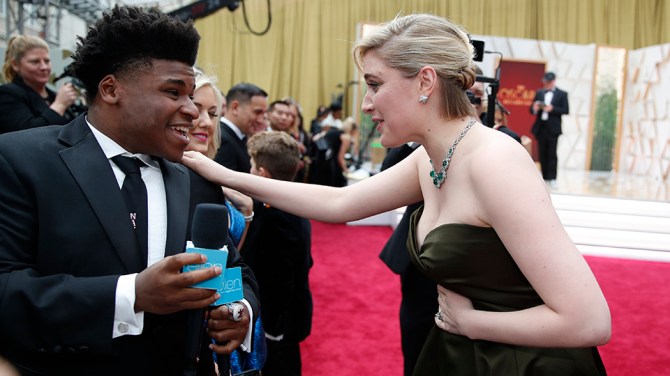 What happened to Jerry Harris? Jerry was arrested at his home in Naperville, Illinois, on September 17, 2020, by the Federal Bureau of Investigation and charged with the production of child pornography in a federal court in Chicago. (Production of child pornography has a minimum sentence of 15 years in prison and a maximum of 30 years.) According to a criminal complaint obtained by The New York Times, Jerry admitted in an interview with law enforcement officials three days before his arrest that he had asked for and received child pornography from at least 10 to 15 minors he knew were underage. He also admitted to having sex with a 15-year-old at a cheerleading competition in 2019.

Jerry’s arrest also came after he was sued September 14, 2020, in Texas by twin brothers, Charlie and Sam, who claimed that he sent and asked for sexually explicit messages and photos from them via text and on social media. Charlie also alleged that Jerry asked him for sex at a cheerleading competition. According to the complaint, Charlie sent Jerry more than a dozen photos and videos of his genitals—at Jerry’s request—between December 2018 to March 2020. Charlie, who told Jerry he was 13 years old during their first online conversation, also alleged in the complaint that Jerry sent photos of his genitals and videos of him masturbating, as well asked for oral sex in a bathroom at a cheerleading event they both were at. Sam claimed that Jerry also sent him sexually explicit messages, where he requested nude photos on Snapchat and asked to have sex in person. He also described Jerry as “touchy” and alleged that he did “odd things” to him and his twin. In the complaint, the twins’ mother, Kristen, told officers that she found Jerry’s messages, which included explicit photos and a video, in February 2020. The complaint also stated that the mother told Charlie to delete the messages, which he did.

In their lawsuit, the twins’ lawyer claimed that Jerry “violated his role as a mentor, trainer, coach, sexually violated the Plaintiffs, and used his position of authority and power over the Plaintiffs.” Jerry was 19 when he first communicated with the brothers. “We are grateful that the U.S. Attorney and the F.B.I. have taken swift action to protect children by investigating, arresting and charging Jerry Harris,” Morgan Stewart and Sarah Klein, lawyers for the twins, said in a statement at the time.

The lawsuit said that Mr. Harris “violated his role as a mentor, trainer, coach, sexually violated the Plaintiffs, and used his position of authority and power over the Plaintiffs.” Mr. Harris befriended the boys when he was 19. “We are grateful that the U.S. Attorney and the F.B.I. have taken swift action to protect children by investigating, arresting and charging Jerry Harris,” Morgan Stewart and Sarah Klein, lawyers for the boys, said in a statement on Thursday.

In an interview with USA TODAY in September 2020, Klein stated that she hoped the public would “let the truth play out” and not defend Jerry because of his fame. “He might be charming and funny and lovable and also be engaging in sexual activity with children,” Klein said. The report also included screenshots various text and social media conversations between Jerry and the twins. In one Snapchat conversation, an account with the handle “.jerry harris” responded to a picture of Charlie stretching his leg above his head. “Do it naked and take a video and show me,” Jerry responded privately, according to a screenshot obtained by USA TODAY.

Charlie told the publication that he suffered anxiety after his conversations with Jerry, which led him to lose sleep, cry at school and see his grades decline. “It was just eating me alive,” he said. “It was just making me so gross and uncomfortable. Every time I saw his name or something like that, I was just cringing about it.” Charlie also told USA TODAY that Jerry cornered him in a bathroom at the American Cheerleaders Association’s national competition in Fort Worth, Texas, in February 2019, where he asked him to have sex. Charlie, who was 13 at the time, turned down Jerry, who was 19, and ran out of the bathroom. Three months later, Jerry asked Charlie for sex again at The Summit cheerleading competition in Orlando, Florida. “Hey btw I found a place for us to do stuff it’s actually pretty good haha” read a text message Jerry sent Charlie on May 3, 2019, obtained by USA TODAY. The publication also published a screenshot of a Snapchat on February 6, 2020, that Jerry sent Sam with the caption: “Would you ever want to ****”

The complaint against Jerry also included interviews with two 17-year-olds and law enforcement officials. During the interview, one of the teenagers said that he met Jerry at a party in the summer of 2020, where he told him he was 17. Jerry later messaged the teenager on Snapchat and asked him for photos. While the teenager didn’t send pictures then, he did send photos to Jerry weeks later in exchange for money, which was sent by an electronic payment application. According to the complaint, the first teenager told a second teenager about the exchange with Jerry, which led him to also send him photos. The complaint also alleged that Jerry paid one of the teenagers $500 for a video call in which the 17-year-old exposed himself. The teenager claimed that Jerry continued to message him throughout the summer and paid him between $2,000 to $3,000 before sending him $500 on August 22, 2020, to end the relationship and block him on Snapchat.

Two months after his arrest, seven more counts regarding five minors were handed down in Jerry’s case. Along with the charges he faced in September 2020, Jerry was also charged with receiving and attempting to receive child pornography and four counts of using, persuading, inducing, and enticing a minor “to engage in sexually explicit conduct for the purpose of producing a visual depiction of such conduct, and…transmitting a live visual depiction of such conduct” in Naperville, Illinois (where he’s from), and Corsicana, Texas, where he attended Navarro College and filmed Cheer. Jerry was also charged with one count of using the internet in Orlando, Florida, to “persuade, induce, and entice” a minor to engage in sexual activity. According to the complaint, Jerry traveled from Texas to Florida “for the purpose of engaging in illicit sexual conduct … with intent to engage in a sexual act with Minor 5 who was 15 years old”—four years younger than Jerry at the time.

Where is Jerry Harris now?

Where is Jerry Harris now? After his arrest on September 17, 2020, Jerry was taken into custody without bond at the Metropolitan Correctional Center in Chicago, Illinois. In October 2020, assistant U.S. Attorney Christopher Parente filed a court motion to keep Jerry in jail as he awaits his trial. In the motion, Parente stated that Jerry was “tipped off” by a friend in May 2020—four months before his arrest—which led him to dispose of his cellphone because he knew it had evidence of his crimes. Parente claimed that Jerry continued to communicate with minors with a new phone even after he was warned.

Jerry’s lawyers, for their part, filed a motion for a pretrial release at the time, arguing that his previous clean record did not warrant for him to stay in prison. U.S. District Court Judge Heather McShain, however, denied the motion and ruled on October 16, 2020, to keep Jerry behind bars on the basis that he lacked control over his urges and posed “a significant danger to the community.” Jerry pleaded not guilty at an arraignment hearing by telephone to a federal court in Chicago on December 17, 2020, according to court records obtained by The New York Times.

Jerry’s arrest was featured in episode 5 of Cheer season 2. In the episode, which was titled “Jerry,” The episode ended with the following text on the screen: “Jerry has been held at the Metropolitan Correctional Center in Chicago since his arrest in September 2020. He still awaits trial. If convicted, he faces a mandatory minimum fifteen-year sentence.” Cheer director Greg Whiteley stated in the press notes for Cheer that he hasn’t talked to Jerry since his arrest because his lawyers have prevented it. Netflix also said that Jerry’s lawyers declined to comment for the show. As of January 2022, Jerry is still held at the Metropolitan Correctional Center in Chicago. No trial date has been set.