You might’ve missed Jennifer Lopez and Shakira’s Kobe Bryant tribute at the Super Bowl 2020 Halftime Show. Though the Hustlers star, 50, and the “Hips Don’t Lie” singer, 43, went viral for their performances of “She Wolf,” “On the Floor,” “Jenny From the Block” and many more hits at the Super Bowl LIV on Sunday, February 2, several viewers criticized the performers for not honoring the late Los Angeles Lakers player, who died in a helicopter crash along with eight other people, including his 13-year-old daughter Gianna, on January 26. “Guess seeing @JLo on a pole is more important than a Kobe tribute. You suck #PepsiHalftime #KobeForever,” one user Tweeted after the Super Bowl.

Turns out, J-Lo and Shakira did pay tribute to Kobe at the Super Bowl, though the moment was missed by many viewers. According to The Hollywood Reporter, the tribute came after Lopez invited her 11-year-old daughter Emme to perform “Let’s Get Loud” with her toward the end of performance. While the cameras focused on Emme and her mom, a giant cross on the field illuminated in yellow and purple, the colors of Kobe’s longtime basketball team, the Los Angeles Lakers.

In a press conference before the halftime show, Lopez recalled the moment her fiance, Alex Rodriguez, told her about Kobe’s death. “I was in the middle of rehearsing and talking about this show and Alex came to me with tears in his eyes and he’s like, ‘You’re not going to believe what happened,'” she said. “And he was devastated. I think it’s just affecting everybody so much because it’s just reminding us how fragile life is and how we have to appreciate every single moment.” 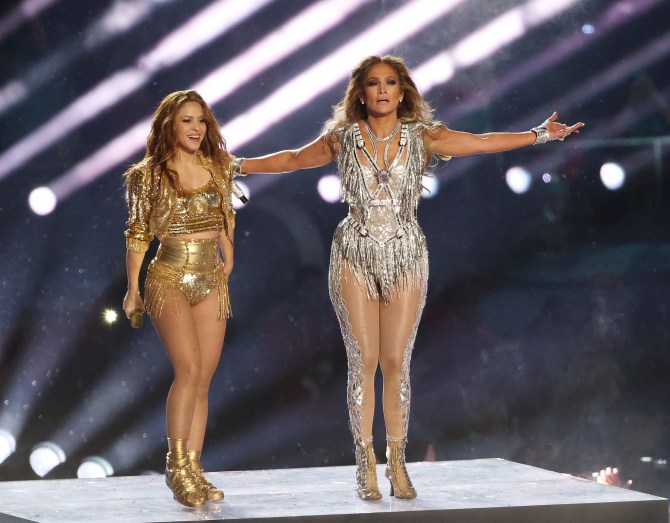 Kobe died at the age of 41 on January 26 after his helicopter crashed into a mountain in Calabasas, California, and caught on fire. All nine people on board were killed by the accident. Along with Kobe and his daughter, the victims included the pilot Ara Zobayan, college baseball coachJohn Alto belli, his daughter, Alyssa, and his wife, Keri; girls’ basketball coach Christina Mauser; mom Sarah Chester and her 13-year-old daughter Payton.