Jenny from the Block is at the inauguration, everyone! And she brought out all the stops to sing a rendition of “This Land Is My Land” and “America The Beautiful” with a line from “Let’s Get Loud” thrown in for good measure. She also recited two lines of the Pledge of Allegiance in Spanish, being a voice for the Latino American community. Lopez’s inauguration look was perfect for the occasion, an all-white Chanel pantsuit and poet shirt that’s equal parts warm and chic. And that bling? Well, she wouldn’t be JLo without it.

Wearing white for any political function is usually not an accident when you’re a woman. White is still a symbol of the Suffragette movement, the fight for the right to vote for women in the United States. And now, Lopez is singing on stage at the same time the first woman is sworn in as Vice President of the United States—and the first woman of color. Talk about a historic moment. 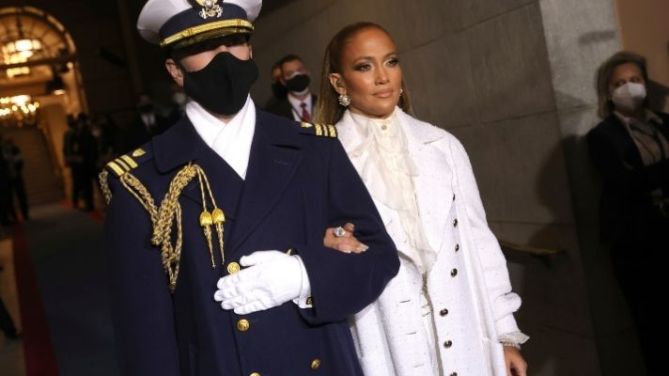 Lopez’s makeup sparkled from her platform. She pulled her hair back in her signature long ponytail, created by Chris Appleton, to let the glam shine. Makeup artist David Velasquez brought out the 2003-era JLo vibes in the best way possible with icy eyeshadow that shimmers in the corners of her eyes. Full lashes and nude lips complete the now-iconic look. 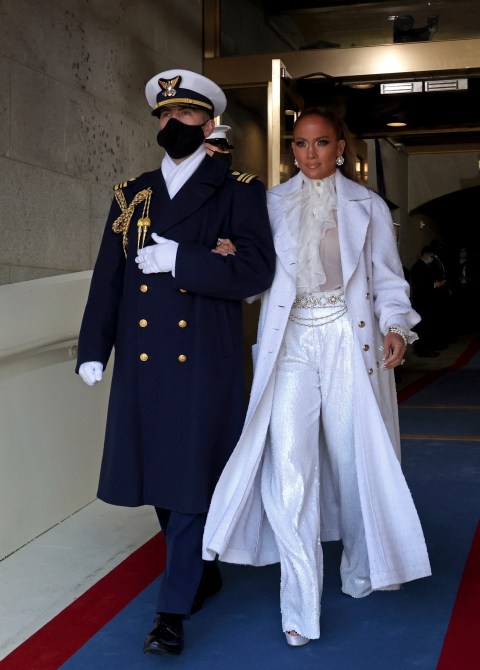 Some could call her an Ice Queen with her icy white suit, that major bling and icy makeup out there in the snow. Even her nails and platform sandals are white, matching her white Chanel pearls.

But that would imply she was anything but warm. The Jennifer Lopez we saw was honored to be there and to show her support to President Joe Biden and Vice President Kamala Harris. It feels so great to say that, doesn’t it?