With three ex-husbands and two ex-fiancés, Jennifer Lopez’s engagement rings are worth tens of millions of dollars. But which of J-Lo’s diamond dazzlers is the most expensive? You may be surprised by the answer.

In her 30-plus years in Hollywood, J-Lo has been married three times and engaged twice. Her first marriage was to actor Ojani Noa, whom she divorced in 1998 after a year of marriage. Lopez went on to marry choreographer Cris Judd in 2001. The two split in 2003. In 2002, after her separation from Judd, Lopez dated and got engaged to actor Ben Affleck. The couple never walked down the aisle, however, as the two split in 2004.

Lopez went on to marry singer Marc Anthony in 2004. The couple welcomed two kids, twins Maximilian David and Emme Maribel, before their divorce in 2004 after 10 years of marriage. Lopez’s most recent high-profile relationship came in 2017 when news broke that she was dating former New York Yankees player Alex Rodriguez. The two got engaged in March 2019 before their split in April 2021, two months after rumors that Rodriguez had cheated on Lopez with Southern Charm star Madison LeCroy.

In an interview with Harper’s Bazaar in 2019, Lopez opened up about her past relationships and why she’s still hopeful for love. “For me, the relationship journey has been very up and down,” she said. “But it didn’t have to do with anybody else but me—it was about me figuring out me. Until you learn to love yourself, you can’t completely love [someone else] in a way that is pure and true. Once you do that, you can have relationships that are based on love and respect, that are supportive and nourishing. There’s an evolution there that had to happen for me.”

So that’s J-Lo’s relationship history in a nutshell. Ahead are details about Jennifer Lopez’s engagement rings from A-Rod, Affleck and more exes, and which is the most expensive.

Affleck proposed to Lopez in April 2022, a year after they reunited in April 2021. Lopez announced her engagement in on April 8, 2022, in her newsletter, On the JLo, which included a video message to her fans where she shows off her new diamond engagement ring and says, “You’re perfect.” Lopez also teased the “major announcement” in a Twitter video. “So I have a really exciting and special story to share,” Lopez said in the video. She also added a diamond ring emoji to her Twitter bio. The ring is 8.5 carats with a natural green diamond center stone. The ring is estimated to cost between $5 million to $10 million. The diamond was sourced by Ilan Portugali of Beverly Hills Diamonds. “Congratulations Ben & @jlo on your engagement. It was my honor to be part of this exciting journey, on a quest to source such an exceptional natural gem for your spectacular engagement ring,” Portugali wrote in an Instagram post after Ben and J-Lo’s engagement. “Among fancy-color diamonds, natural-color green stones with saturated hues are some of the rarest and most sought after. Green color synchronizes Nature & tranquility and represent life, health and associates with luck & prosperity.”

In a past newsletter, Lopez explained that “green” was her “lucky color,” which is why she wore her iconic Versace green dress to the Grammys in 2000. “I always say the color green is my lucky color,” she wrote at the time. “Maybe you can remember a certain green dress.” She continued, “I’ve realized there are many moments in my life where amazing things happened when I was wearing green.” J-Lo also referenced a painting that hung in her office which featured a green bird perched on someone’s hand with the words “Let Go” on both sides.

“I don’t buy a lot of art, but I bought this,” Lopez wrote at the time. “One because I love hummingbirds, and two because I love the color green. Birds always fly around me. I’ve always had a special connection with hummingbirds. I realized that a lot of people say they symbolize love. So whenever it feels like wherever I go, they follow me. Whenever I am in a moment of doubt and confusion, one will magically appear by my window, reminding me that the universe will always speak to us if we are open to the signs.”

Lopez went on to explain that she connected green to good fortune and that the color taught here “there are no coincidences” in life. “It says, ‘Let go,’ which at that moment in my life was something that I really needed to do,” she wrote. “It has become one of my insights and philosophies…that anything you hold on to too tightly you will break. I love in this picture how the hand is wide open, and the bird is just sitting there… Not. Going. Anywhere. It’s about trust. We have to trust that what is for us, will be for us, no matter what. Trust and love.”

Lopez and Rodriguez first met at a New York Mets game in May 2005 while J-Lo was still married to Marc Anthony. They didn’t start dating until 2017 when they reconnected at a restaurant. In March 2019, Rodriguez proposed to Lopez while on vacation in the Bahamas. Two years later, Lopez and Rodriguez confirmed that they had ended their engagement amid rumors that A-Rod cheated on J-Lo.

“We have realized we are better as friends and look forward to remaining so,” the couple said in a statement at the time. “We will continue to work together and support each other on our shared businesses and projects. We wish the best for each other and one another’s children. Out of respect for them, the only other comment we have to say is thank you to everyone who has sent kind words and support.”

As for Lopez’s engagement ring, Rodriguez proposed to her in 2019 with an 10 to 15-carat, emerald-cut diamond ring that’s estimated to be worth $1.8 million. A week after J-Lo and A-Rod’s breakup, TMZ reported that Lopez still had the ring because she and Rodriguez hadn’t discussed who should keep it. 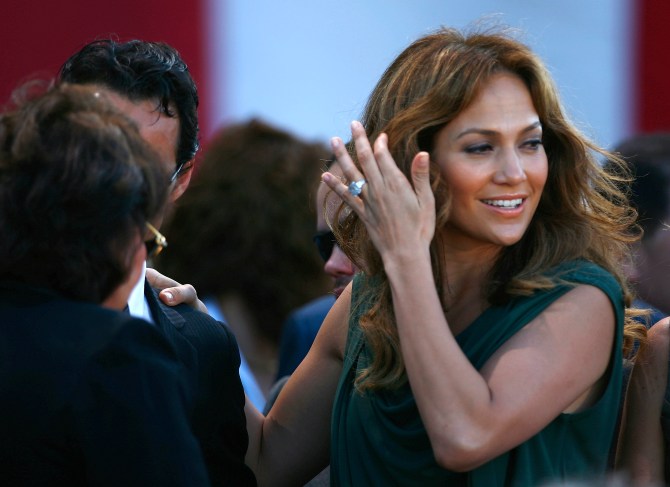 Lopez and Anthony were married from 2004 to 2014. The couple, who met in 1998 when Anthony was performing in the Broadway musical The Capeman, share two twins: daughter Emme and son Maximilian. As for her engagement ring, Anthony proposed to Lopez with an 8.5 carat blue diamond ring from Harry Winston. The ring is estimated to be worth $4 million. 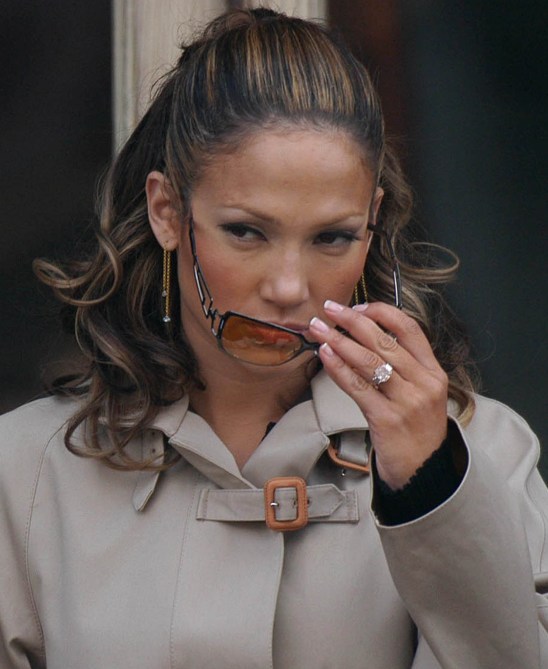 Lopez and Affleck, who starred in movies like Jersey Girl and Gigli together, got engaged in 2002 months after J-Lo announced her divorce form her husband at the time, Cris Judd. Rumors started of Affleck and Lopez’s relationship while they were filming Gigli. Lopez and Affleck never walked down the aisle, however, as the two ended their engagement in 2004. Still, Affleck’s engagement ring to Lopez was a stunner. The ring was a 6.10 carat radiant-cut pink-diamond Harry Winston. The ring is also credited for starting the trend of colored diamonds and increasing the value of pink diamonds. The price of the ring is estimated at $2.5 million. J-Lo’s former publicist, Rob Shuter, revealed in an interview with Access Hollywood in 201 that J-Lo never returned the ring to Ben. “As far as I know, Jen has never returned the ring,” he said. “So, if things move forward with these two, gosh, she’s already got the most beautiful ring I’ve seen…it’s absolutely stunning. I was with her once, and it is blinding.” 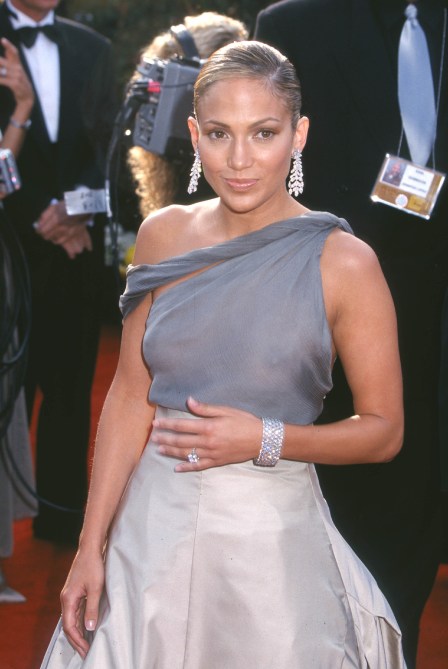 Judd and Lopez met in 2000 when he was hired to direct her music video for “Love Don’t Cost a Thing.” The couple got engaged in August 2001 and married a month later. The relationship didn’t last, however, as Lopez and Judd split in 2003. Lopez’s engagement ring from Judd isn’t one of her most expensive. The dazzler is worth six figures, according to Diamond Hedge, and featured an emerald-cut diamond. 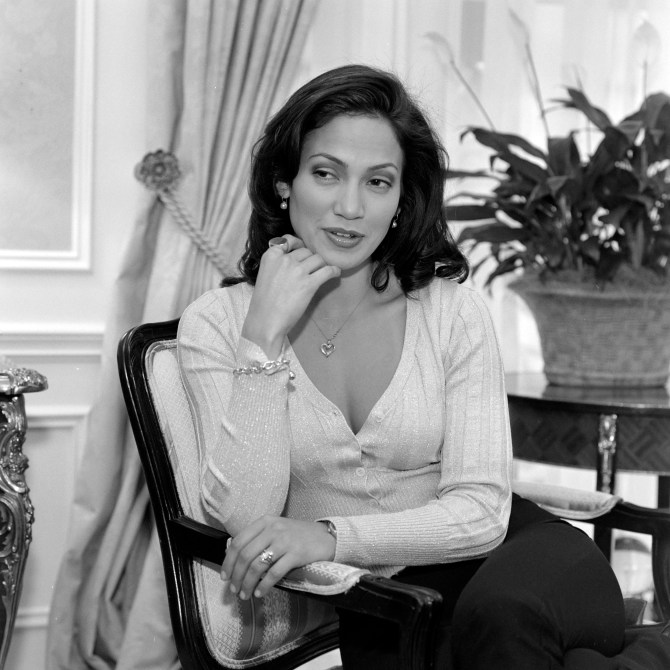 Ojani, J-Lo’s first husband, met Lopez while he was working as a waiter at Gloria Estefan’s restaurant. The couple wed in 1997 before their divorce a year later in 1998. Ojani proposed to Lopez with a $100,000 pear-shaped diamond engagement ring.

For more about J-Lo’s love life, check out True Love by Jennifer Lopez. The 2014 memoir covers the “Jenny on the Block” singer’s career and personal life, from her start as a dancer to when she became a mom of two twins with her now-ex-husband Marc Anthony. In the book, which includes more than 200 personal photographs J-Lo’s never-before-sseen collection, the Selena actress writes about how “she confronted her greatest challenges, identified her biggest fears, and ultimately emerged a stronger person than she’s ever been” to become the pop icon we know today.