For the first time ever, fans are getting to see Jennifer Lopez and Ben Affleck at the Met Gala as a couple. The pair, who were previously engaged from 2002 to 2004 before reuniting in 2021, arrived at the star-studded event at New York City’s Metropolitan Museum of Art on Monday, September 13.

Jennifer, 52, wore a Western-inspired brown gown by Ralph Lauren with a silver statement necklace and a dark gray cowboy hat. The “Lonely” singer also paired the look with a faux fur cape and platform heels. Ben, 49, wore a simple black tuxedo and didn’t walk the red carpet with J-Lo. While they weren’t photographed together on the carpet, J-Lo and Ben were photographed together backstage sharing a romantic kiss with their masks on. (See the photo here.)

J-Lo has been a regular guest at Vogue’s annual fundraising gala for years, having attended for the first time in 2004. Since then, the “In The Morning” singer has attended the Met Gala several times, appearing most recently in 2019 alongside her then-fiancé, Alex Rodriguez.

As fans may know, J-Lo went on to rekindle her relationship with former fiancé Ben Affleck following her split from A-Rod in April 2021. And now that Bennifer is back on, they aren’t shying away from attending events together. While J-Lo and Ben’s 2021 Met Gala arrival marked the first time the pair has attended Vogue’s star-studded annual event as a couple, it isn’t their first foray back into the red carpet scene. 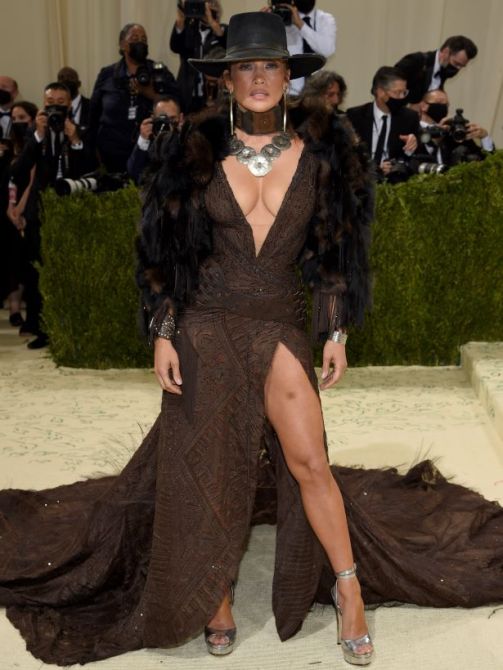 J-Lo and Ben’s Met Gala appearance came just days after the couple walked their first red carpet in nearly 20 years together. The couple made their post-reunion red carpet debut at the 2021 Venice Film Festival on September 10 for the premiere of The Last Duel. (Ben plays 14th-century European count Pierre d’Alençon in the film, which is set to arrive in theaters in October in the United States.) Prior to this premiere, J-Lo and Ben’s last red carpet appearance together was in 2003 for Ben’s movie Daredevil.

The Hustlers star, 51, and Argo producer, 48, began dating for the first time after meeting on the set of Gigli in 2001. Bennifer, as they soon became known, were engaged by November 2002 after Ben popped the question with a 6.1-carat pink diamond engagement ring from Harry Winston. The pair were set to wed in September 2003, but just two days before their nuptials, J-Lo and Ben revealed their decision to “postpone” their wedding. “Due to the excessive media attention surrounding our wedding, we have decided to postpone the date. When we found ourselves seriously contemplating hiring three separate ‘decoy brides’ at three different locations, we realized that something was awry,” the couple said in a statement at the time. 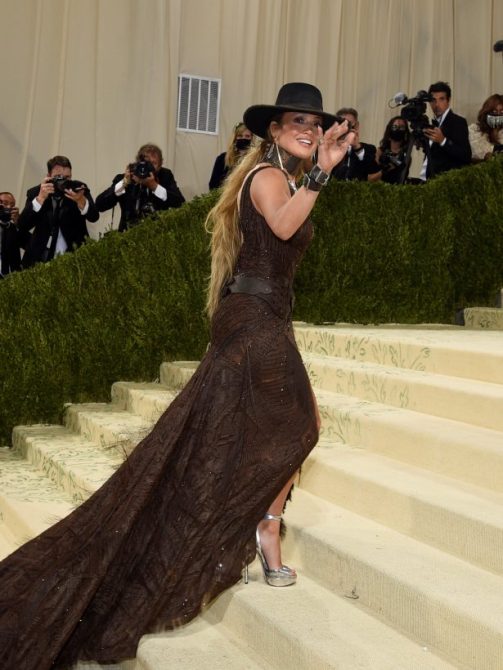 Their statement continued, “We began to feel that the spirit of what should have been the happiest day of our lives could be compromised. We felt what should have been a joyful and sacred day could be spoiled for us, our families and our friends.” By early 2004, it became clear that a wedding was no longer on the table as the couple formally announced their decision to separate. “I am confirming the report that Jennifer Lopez has ended her engagement to Ben Affleck,” J-Lo’s rep said in a statement at the time. “At this difficult time, we ask that you respect her privacy.”

In her 2014 memoir, True Love, J-Lo revealed that her breakup with Ben was the “first real heartbreak” she ever experienced. “Ben and I split up at the moment when I thought we were committing to each other forever,” the Selena actress wrote. “It was my first real heartbreak, it felt like my heart had been torn out of my chest.” Years later, however, J-Lo’s heartbreak has clearly mended over thanks to her reunion with Ben following her split from her former fiancé, Alex Rodriguez, in April.