Since they got back together, fans have wanted to know when Jennifer Lopez and Ben Affleck will get engaged again and if her new diamond ring will be even bigger than her last one.

J-Lo and Ben met on the set of Gigli in 2001 and started dating in 2002. In November 2002, Ben proposed to J-Lo with a reported $2.5 million engagement ring with a 6.10 carat radiant-cut pink Harry Winston diamond, and the two got engaged. (See photos of her engagement ring here.) In September 2003, days before their wedding, announced that they had postponed their nuptials.

“Due to the excessive media attention surrounding our wedding, we have decided to postpone the date,” Ben and J-Lo said in a joint statement at the time. “When we found ourselves seriously contemplating hiring three separate ‘decoy brides’ at three different locations, we realized that something was awry. We began to feel that the spirit of what should have been the happiest day of our lives could be compromised. We felt what should have been a joyful and sacred day could be spoiled for us, our families and our friends.”

In January 2004, J-Lo confirmed that she and Ben had broken up after two years together. “I am confirming the report that Jennifer Lopez has ended her engagement to Ben Affleck,” a representative for J-Lo said in a statement at the time. “At this difficult time, we ask that you respect her privacy.” Almost two decades after their breakup, J-Lo and Ben got back together in April 2021, weeks after her split from her fiance, Alex Rodriguez.

Though J-Lo and Ben haven’t spoken about their breakup much since it happened, a source told Page Six in 2021 that the two split because they were at different places in their lives at the time, but J-Lo has always seen Ben as the “one who got away.” “As hot and heavy as their relationship was, they were on very different paths at the end of it,” the insider said. “Jennifer was ready to settle down and have kids, but Ben wasn’t keen on giving up his bachelor lifestyle just yet. In the end, she got tired of waiting for him to come around — even though it broke her heart to end things.”

The source continued, “Jennifer always saw Ben as the one that got away. She was crushed after they broke up, though she felt at the time that she had no other choice but to call off their engagement.” 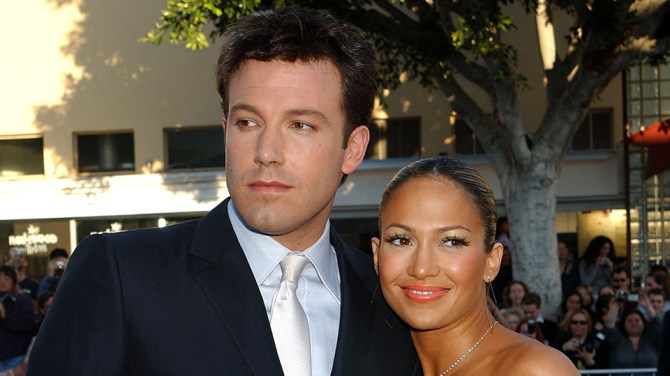 So…are Jennifer Lopez and Ben Affleck engaged again? The answer is no. Though they’re not engaged now, a second engagement could be close. Ben was photographed looking at engagement rings with his mom, Chris, and his son, Samuel, at a Tiffany’s store in Century City, California, in August 2021. (See photos here.)

A source told E! News at the time, however, that Ben was at Tiffany’s as a part of a scavenger hunt at the Century City mall—not to shop for an engagement ring for J-Lo. “They split into teams with his daughters on one team and Ben, Sam and his mom on the other,” the insider said. “They went all around the mall and into various stores crossing off each of the items they found. One of the stops was into Tiffany and they had to find something in the store. Ben walked in with his son and his mom and they quickly found what they needed and walked out. Ben held a pen and crossed it off his list.”

The source continued, “They all had fun and got into the game. It was a fun family activity that they seemed to enjoy doing together.”

The photos came days before J-Lo and Ben’s kids met in August 2021 for a performance of Hamilton at the Hollywood Pantages Theatre and dinner at The Magic Castle in Los Angeles. Ben shares three kids with ex-wife Jennifer Garner—son, Samuel, and daughters, Seraphina and Violet—while J-Lo has two children with ex-husband Marc Anthony: twins Max and Emme.

A source told HollywoodLife in June 2021 that J-Lo and Ben are “rushing” to get engaged a second time. “Jen has been prepared for a wedding for quite a while because that was what was going to happen with Alex and now that her relationship with Ben is so hot and heavy, she would 1,000 percent say yes if Ben were to pop the question to her again,” the insider said.

Though there isn’t a rush for a second engagement, J-Lo and Ben’s family and friends are supportive if they decide to get engaged again. “Everyone in Jen and Ben’s world would be very happy if they decided to get engaged and married. All of that will happen naturally just like their relationship is currently. It’s safe to say that engagement feelings are in the air and it will happen when it happens,” the insider said.

The source continued, “But Ben is not going to do it just to do it or if her family wants it to happen. It will happen when they both want it. Their relationship is wonderful right now, so they are making the best of it and not allowing any unnecessary drama to creep in. They are busy, they are having fun and when an engagement happens, it will be the right time and a happy time for everyone,” our source adds.

A source told Us Weekly in August 2021 that J-Lo and Ben may have a change of heart and are “seriously talking about getting married.” “They are both madly in love and don’t want to let one another go this time,” the insider said. The source also noted that Ben views J-Lo as the “one that got away” and is “determined to make sure that doesn’t happen this time.”