Family date night! Jennifer Lopez, Ben Affleck and Emme all went out to dinner together in Los Angeles recently, according to new photos obtained by The New York Post’s Page Six.

The Hustlers star, 52, and the Argo producer, 48, were joined by the singer’s 13-year-old daughter, Emme, during the night out on the town (Emme’s twin, Max, was not present). The trio headed out to celeb-favorite restaurant Craig’s in West Hollywood. Their dinner marks the latest blended family outing for J-Lo and Ben—in June, the Gone Girl actor joined the Selena alum’s family for dinner in Malibu, and by July, Ben even brought along his own kids for a day out with J-Lo and her twins. Ben shares a 9-year-old son, Samule, and daughters Violet, 15, and Seraphina, 12, with his ex-wife, Jennifer Garner.

According to a source who spoke to People in June, J-Lo’s twins seem “onboard” with their mom’s new relationship. “They are slowly getting to know Ben,” the insider explained at the time, adding, “Everything seems to be running smoothly. It’s very obvious that Jennifer is serious about Ben. She hasn’t looked this happy for a long time.”

News of their family outings comes amid reports that J-Lo and Ben may be planning to move in together. According to a Us Weekly report on July 8, the pair have been “spending almost every night together” since they reunited in April and they could be living together “very soon.” An insider said, “Ben and Jen are spending almost every night together when they’re not working. They plan on moving in together very soon.” 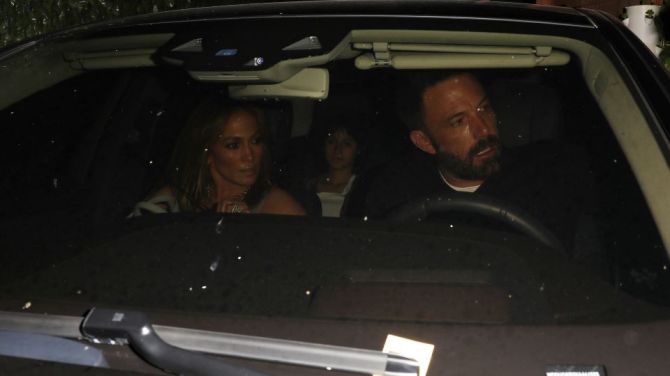 Meanwhile, speculation about their possible move comes just three months after J-Lo and A-Rod, who got engaged in March 2019, announced their split in April after four years of dating. “We have realized we are better as friends and look forward to remaining so,” the former couple said in a statement to the Today show at the time. “We will continue to work together and support each other on our shared businesses and projects. We wish the best for each other and one another’s children. Out of respect for them, the only other comment we have to say is thank you to everyone who has sent kind words and support.”